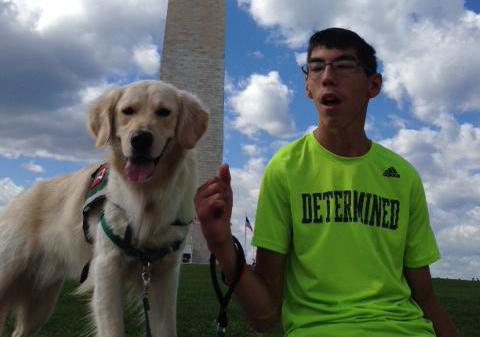 Washington, July 27 – As people around the country celebrated the 25th anniversary of the Americans with Disabilities Act (ADA), the Clinton campaign handed over its Twitter account to a disability advocate and mom named Sara.

Sara, a nurse from Cedar Rapids, Iowa, used the opportunity to share the story of her 16-year-old son Adam, who has Lennox-Gastaut Syndrome (a severe form of epilepsy), with Clinton’s nearly four million Twitter followers.

I’m Sara—mom, nurse & lifelong Iowan. I’m taking over @HillaryClinton today for the 25th anniversary of the Americans with Disabilities Act.

In her tweets, she illustrated the realities of raising a child with a disability, sharing her fears for when he grows up but also the hopes she has for him. “The ADA helps him to live life to the fullest, each & every day,” Sara tweeted.

“It’s just a great platform to get our story out there, and not only raise awareness for our son but really everyone with disabilities,” Sara said in an interview with The Gazette of Cedar Rapids.

Clinton has come under scrutiny for not including people with disabilities in her announcement video, and her famed van momentarily stopping in a handicap parking spot in Council Bluffs, Iowa in April. Yet she has been a supporter of epilepsy research.

“We know Hillary’s a fighter & that she’ll fight for Adam as President just like she did at the Children’s Defense Fund & in Congress,” Sara tweeted in support of the presidential candidate.

After law school, Clinton worked for the Children’s Defense Fund, where she fought for education of children with disabilities.

Yet much of Clinton’s previous conversations on helping people with disabilities centers on finding cures. While some people in the disability community focus on cures, others are proud of who they are and choose to focus on an empowerment strategy versus a medical strategy. It is too early to tell what Clinton may focus on but it’s important for her to remember that not all people in the disability community want a president’s focus to be solely on cures.

President Ronald Reagan worked to ensure that all Americans have the opportunity to achieve the American dream. Under his administration, the ADA was started. President George H.W. Bush signed it into law on July 26, 1990. This act prohibits the discrimination of people living with disabilities, enabling millions of Americans with disabilities to go into schools, civic institutions, and the workforce to create a better future for themselves and their families.

Because of ADA, Adam is able to bring his service dog Turbo with him everywhere, including school. In the tweets, Sara talks about how her son is involved with normal activities, including attending day camp during the summer and running cross country at school. People with disabilities often have to fight against the stigma that they are helpless. Sara’s tweets illustrated how Adam can do many more things than may be expected from him.

Yet Sara expressed her concern for what will happen to Adam once he graduates.

One thing that concerns us as Adam gets older is what happens after he finishes school. — Hillary Clinton (@HillaryClinton) July 26, 2015

Clinton thanked Sara for being an inspiration.

Sara: Thanks for sharing your story with us on #ADA25. Your work every day – as a mom, nurse, and advocate – is an inspiration to us all. -H

Speaking later in Ames, Clinton said she was “thrilled” to see the progress of the ADA and thanked former Sen. Tom Harkin for his leadership.

“We should acknowledge how the disabilities community has played such an important role in changing things for the better in our country,” Clinton said before describing her first job going door-to-door to determine why children were being kept home from school.

“I heard mostly that, yes, we have a blind child, a deaf child, a child in a wheelchair, a child with some other kind of disability that is not accepted in school,” Clinton explained. “That first effort resulted in passing Education for All, and all children with disabilities were given the right to go to school. That was a huge step forward for our country.”

“We’re by no means finished,” Clinton continued, saying work still needs to be done. “I personally believe that the progress and the landmark legislation – first on education then broadly opening up transportation and buildings and employment, everything that people should be able to pursue – that that legislation was one of the real highlights of the civil rights and human rights movements in America.”

It is important for the presidential candidates to lend their voices about this important issue while on the campaign trail. In The Gazette interview, Sara stressed the importance of the candidates speaking about this issue in Iowa.

“I think Iowa, as most of the nation knows, carries a lot of weight, and we have a long history of checking out our presidential candidates and seeing how they stand on issues that are important to us and kind of help with that vetting process,” she said.