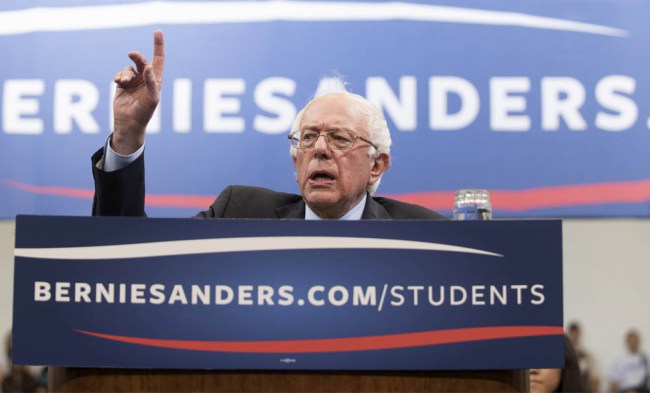 Published by Lauren Appelbaum on October 29, 2015

Washington, Oct. 29 – Presidential hopeful Bernie Sanders is the first presidential candidate to call for removing marijuana from the Controlled Substances Act – a list of the most dangerous drugs outlawed by the federal government. This would allow states to legalize recreational marijuana. Possibly even more importantly, this also would mean medical researchers could test marijuana for a variety of medical issues including epilepsy. Currently this is illegal under federal law.

“The time is long overdue for us to remove the federal prohibition on marijuana,” the self-described “democratic socialist” senator from Vermont said at a town hall at George Mason University. “States should have the right to regulate marijuana the same way that state and local laws now govern the sale of alcohol and tobacco. And among other things that means that recognized businesses in states that have legalized marijuana should be fully able to use the banking system without fear of federal prosecution.”

Fellow presidential hopeful Martin O’Malley has pledged to reclassify marijuana on the federal level, which would allow doctors to prescribe marijuana. Currently federal law does not allow for any medical use. The former Maryland governor’s proposal would put the U.S. Food and Drug Administration in control of marijuana instead of the states.

O’Malley’s proposal does not go as far as what Sanders is saying. Sanders’ plan would allow researchers to easily explore cannabis’ potential health benefits.

This is a big issue in Iowa where Iowans for Medical Cannabis has been petitioning Iowa lawmakers for safe and legal access to medical cannabis when it is medically appropriate to reduce the suffering of Iowans living with debilitating chronic conditions. In addition, they are seeking recognition of its medicinal benefits and allowance for academic and medical research.

According to the American Epilepsy Society (AES), three million Americans live with epilepsy. One-third of these people have ongoing treatment-resistant seizures. AES has called for more research to be done and for the federal government to change its classification in order for this to happen. “Current restrictions on the use of medical marijuana for research continue to stand in the way of scientifically rigorous research into the development of cannabinoid-based treatments,” AES Position on Medical Marijuana statement reads.

In addition, veterans of wars in Iraq and Afghanistan are using medical marijuana to treat post-traumatic stress disorder.

Both Sanders and Hillary Clinton discussed the legalization of marijuana at last month’s Democratic debate. Sanders called for full legalization, citing that too many people are sent to jail for non-violent drug offenses. Every 45 seconds, someone is arrested for a marijuana-related offense in the U.S.

“Sanders’ plan would not automatically make marijuana legal nationwide, but states would be allowed to regulate the drug in the same way that state and local laws now govern sales of alcohol and tobacco,” the Washington Post reported. “And people who use marijuana in states that legalize it would no longer be at risk of federal prosecution.”

“In the year 2015, it is time for the federal government to allow states to go forward as they best choose,” Sanders said.