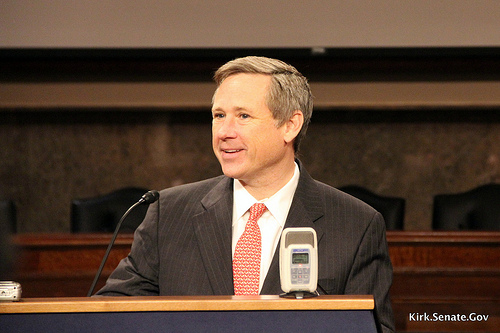 Published by Lauren Appelbaum on September 15, 2016

Washington, Sept. 15 – RespectAbility, a nonprofit organization working to empower people with disabilities to achieve the American dream, has asked senate candidates on both sides of the aisle to fill out a questionnaire on disability issues. Incumbent Sen. Mark Kirk, a Republican running for re-election for the U.S. Senate in Illinois, responded to the #PwDsVote Disability Campaign Questionnaire for Senate and Gubernatorial Candidates for people with disabilities.

Only 36 percent of Illinois’ more than 450,000 working-age people with disabilities are employed. This lack of opportunity creates poverty, powerlessness and even can increase the likelihood of developing a mental health condition.

While Kirk did not answer each question individually, he sent a statement addressing several of the issues brought up in the questionnaire including his own personal experience with disability and his record on improving lives for people with disabilities, as well as specific plans for students and veterans with disabilities.

RespectAbility also has sent the questionnaire to the campaign of Democrat Tammy Duckworth, who also is seeking the Senate seat.

We are presenting Kirk’s full statement below:

“In January 2012, my life changed forever when I suffered an ischemic stroke. If it weren’t for the quick response of paramedics and the outstanding surgeons and staff at Northwestern Memorial Hospital, I would not have survived. Unfortunately, less than five percent of stroke patients get tPA therapy like I did, the only approved treatment for an acute stroke. By expanding use of tPA and telestroke, we can make sure other stroke victims have the same positive outcome I did. That’s why I introduced the S. 1465, the FAST Act, which would allow Medicare to reimburse for telestroke services no matter where they occur. My stroke has left my left side paralyzed and I spend a portion of my time in a wheelchair. The stroke has made me much more empathetic as a person. These days, one of my missions in office has been to reach out to everybody in Illinois who suffers a stroke or other disability. As a stroke survivor I know better than most the value of research and rehabilitation in helping patients return to work and lead fulfilling lives. Stroke patients and individuals recovering from other catastrophic medical events deserve access to the best rehabilitation available. My experience has increased my dedication to improving the lives of people living with disabilities.” – Senator Kirk

Senator Kirk knows firsthand how important the Americans with Disabilities Act is to elevating the independence of the 50 million Americans living with a disability. Laws like the ADA allow all Americans to live life on their own terms.

Supports Securing Continued Funding For IDEA
Senator Kirk supports considering funding for Individuals with Disabilities Education Act (IDEA) every year. He continually urges his colleagues to fully fund IDEA within each funding bill so we can move the needle closer to the 40 percent commitment we made thirty years ago.

Committed To Helping Fellow Stroke Survivors
Increase Stroke Research Funds: Senator Kirk led efforts to increase research funding for StrokeNet, a first of its kind research consortium within National Institutes for Neurological Diseases and Stroke (NINDS). NINDS – the leading stroke research agency in the federal government – receives an additional $107 million in the Labor, Health and Human Services, Education and Related Agencies (Labor-HHS) Appropriations Bill for fiscal year (FY) 2017 which passed committee. While heart disease, stroke and other forms of cardiovascular disease remain our Nation’s most costly disease, NIH invests only four percent of its budget on heart research and one percent on stroke research. Therefore the increased funding for StrokeNet in this bill will support a revolutionary network of research that will help stroke patients return to work faster following recovery.

Battle Buddies: Senator Kirk created “Kirk’s Battle Buddies” in February 2015 to inspire and push individuals to continue working hard with their rehabilitation. Senator Kirk encouraged the “battle buddies,” who are all at various stages of their recoveries to set physical goals, from climbing steps at home to competing stair climbs in all of Illinois’ tallest buildings.

Fighting For All Veterans Including Those Injured In War
Co-Founded the Veterans Job Caucus: In 2012, Senator Kirk and Senator Joe Manchin (D-W.V.) established the Congressional Veterans Jobs Caucus that seeks to create solutions for the challenges of all Active Duty, Reserve and Guard members face as they transition to civilian life – including those that come home with injuries from their service.