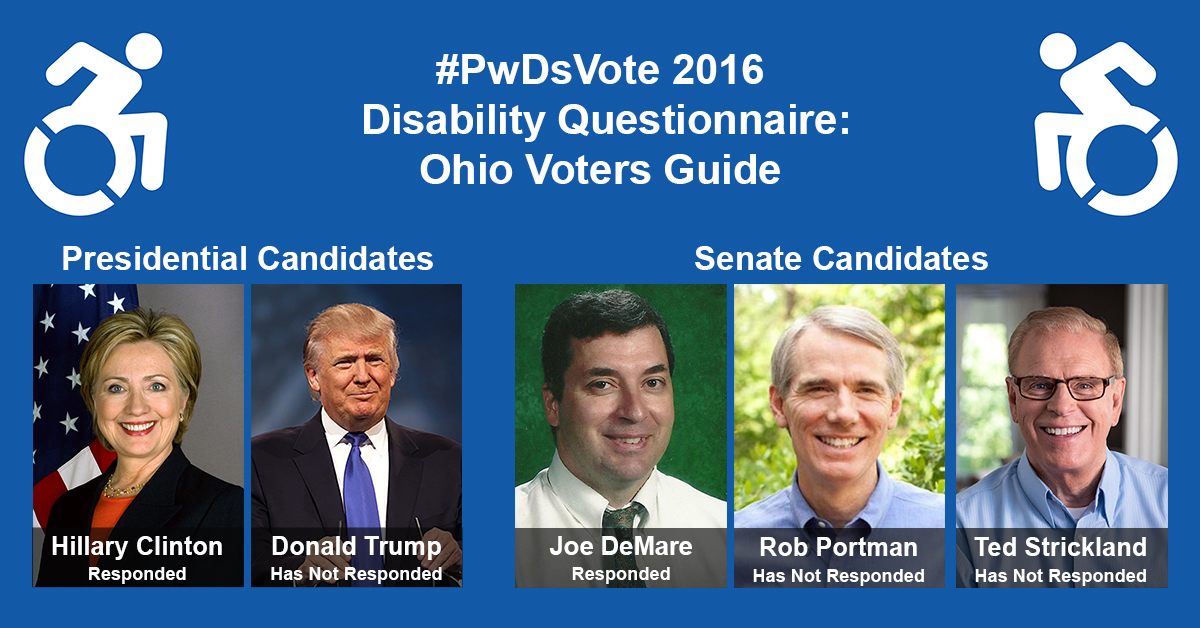 Published by Lauren Appelbaum on October 16, 2016

Washington, Oct. 16 – As voters get ready to head to the polls in Ohio, Respectability is releasing its updated Ohio Disability Voter Guide for the upcoming senate and presidential elections. Green Party candidate Joe DeMare, who is running against Democrat Ted Strickland and incumbent Republican Rob Portman, for the senate seat, completed the #PwDsVote Disability Campaign Questionnaire for people with disabilities. Portman and Strickland have not yet responded to the questionnaire.

Twenty-four additional candidates for Senate, as well as nine candidates for governor, from both sides of the aisle (20 Democrats, 13 Republicans, 1 Green Party) have responded so far, showing that disability rights is a nonpartisan issue. The responses also are geographically-diverse, coming from states all around the country, as politicians are paying more and more attention to the disability community. On the presidential level, Democrat Hillary Clinton has completed the questionnaire while Republican Donald Trump has yet to do so.

Ohio’s 1,555,348 people with disabilities now have a chance to read DeMare’s responses and understand where he lies on certain issues. RespectAbility is still awaiting responses from Portman and Strickland and will publish them verbatim if and when they are received.

In his response, DeMare, whose son is hard of hearing and therefore learned ASL and became a professional ASL interpreter, provided a plan to reduce barriers to employment for people with disabilities.

“I plan to support and strengthen legislation such as the ADA, IDEA, and ABLE acts,” he responded. “I believe that disabled people receiving Social Security benefits should be able to receive full benefits and a full time paycheck for a period of some years with SS benefits tapering off very gradually perhaps over a period of 10  years, with full reinstatement of SS benefits in case of job loss.”

RespectAbility President Jennifer Laszlo Mizrahi said, “It is vital for us to know where the candidates stand on the disability aspects of economic, stigma, education, safety, transportation, housing, healthcare, foreign affairs, criminal justice and other issues. Candidates have hugely different ideas about how to deal with the issues. Thus, it’s extremely important to read their full answers so you can understand their vast differences. We also are disappointed that Mr. Trump, former Gov. Strickland and Sen. Portman have yet to complete the questionnaire and hope they will do so soon. We will send out any updates that arrive.”