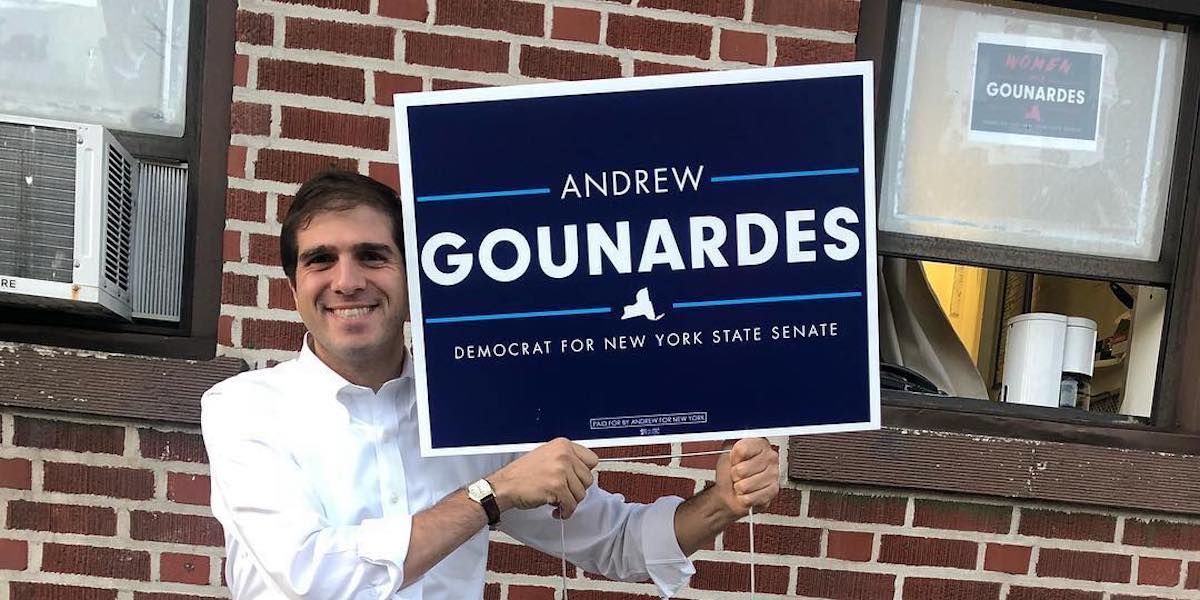 New York City, Oct. 26 – Responding today to a questionnaire by the disability advocacy group RespectAbility, Andrew Gounardes, who is running for New York State Senate District 22 in Brooklyn, outlined his views on education, employment and stigma for the 948,000 people with disabilities living in New York City. That includes people who are blind or deaf or have other visible conditions such as spinal cord injuries, as well as people with invisible disabilities including learning disabilities, mental health or Autism.

RespectAbility reached out to Gounardes’ opponent, incumbent State Sen. Marty Golden, as well, but received no response, according to the organization’s President, Jennifer Laszlo Mizrahi.

The full text of RespectAbility’s questions and Gounardes’ replies follows:

ANSWER: Students with disabilities deserve access to world-class education opportunities in New York but less than 20% of our schools are properly accessible – even District 75 schools that are supposed to cater specifically for students with disabilities. That’s got to change and the first step is fully funding public schools, because our students need better resources, accessible buildings, and less-crowded classrooms.

I think it’s tragic that the City is short 744 pre-K seats for young children with disabilities. I plan to introduce a state constitutional amendment to ensure all children have a right to pre-K, and ensure funding to back it up.

I’m proud to be endorsed by the New York State United Teachers union. I’m committed to making sure Albany supports teachers, including making sure there’s enough culturally appropriate teacher education and training for disability education – giving teachers what they need to give all students the best possible education.

ANSWER: In my experience, people with disabilities want to contribute to their families and the New York economy, and we should be doing more to make that happen. I was very disappointed to see that New York state has dropped to 40th in the nation for employment of people with disabilities. We need to look at why more employers aren’t taking up the Workers With Disabilities Tax Credit. We should consider extending this tax credit to part-time employees.

The State and City itself can lead by example by employing more people with disabilities. The City has the capacity to reserve 700 “55-a” positions for workers with disabilities but last year they left open 265 positions. I’ll do everything in my power to ensure all 700 positions are filled.

Additionally, we must take into consideration physical access to jobs. I believe in the ADA and in ensuring that all of our community’s businesses, schools, and community buildings are accessible to individuals with disabilities. New Yorkers with mobility issues deserve to be able to ride the subways to work as easily as everyone else, but in my district there are no properly accessible stations. My priority is to make every subway station accessible. We also need to improve Access-a-Ride for people who don’t live near subways. And I’m committed to expediting pedestrian ramp construction and addressing raised curbs and broken sidewalk ramps which put people’s safety at risk. As a member of the State Senate, I will hold all agencies accountable to comply with the ADA and commit to hold public hearings.

ANSWER: We need an economy in New York that works for everyone. I’m committed to being part of a State Senate that empowers women economically. Sadly, wages from some jobs are so low that work itself is no longer a path out of poverty, especially for women with disabilities. I will work to close the wage gap for women and people of color by requiring all publicly advertised job postings to include an expected salary rate or range, and requiring all public employers and large employers (initially, those with more than 500 employees) to track, report, and disclose pay gaps based on gender, race and other prescribed diversity characteristics, which could include disability.

I will push to give all working people the right to request flexible work arrangements, and prohibit employers from firing people who ask for them. I will combat sexual discrimination in the workplace by adding “sex and gender identity” to the list of classes protected from discrimination in the New York State Constitution. And I’ll support to increasing funding, subsidies, and tax credits for child care.

I want to see family caregivers made a protected class in law, so they can’t be discriminated against or fired for taking care of their family members with disabilities. For a full list of my commitments to women and families, see https://www.andrewgounardes.com/women/

ANSWER: The way we see ourselves represented in the media and on screen impacts our identities. I will work with the film, tv, and theater industry in New York to encourage them to feature actors with disabilities on screen, on the stage, and behind the camera.

ANSWER: It is important to me that all communities have a voice on my campaign and on my political team. My Field Director has a learning disability and my Deputy Campaign Manager previously worked on special education reform for the Department of Education. ​​I entirely agree that we can’t solve problems unless we listen to the people affected by the problems. That’s why ​​I have met with educators and leadership from a local school serving students with autism and spectrum disorders, and several local advocates for people with disabilities. ​​As a member of the State Senate, I will designate a staff member to be a liaison to the disability community. We must do more to educate the disability community on their rights and support them in helping them navigate the bureaucracies which often are the main barrier to services and accommodations. I will work to ensure that my staff are readily accessible to educate local business, leaders and residents of our community. Building on that​​, I’ve also committed to holding “Senator on the Street” office hours to connect with people in our community, and to be available at a range of times to suit different schedules, including evenings and weekends. I’ll also host quarterly town halls and an annual “Community Convention” so people across our district can meet each other, share information, and learn about the different ideas, projects, and initiatives happening across our neighborhoods. I encourage the involvement of people with disabilities in the Community Conventions.