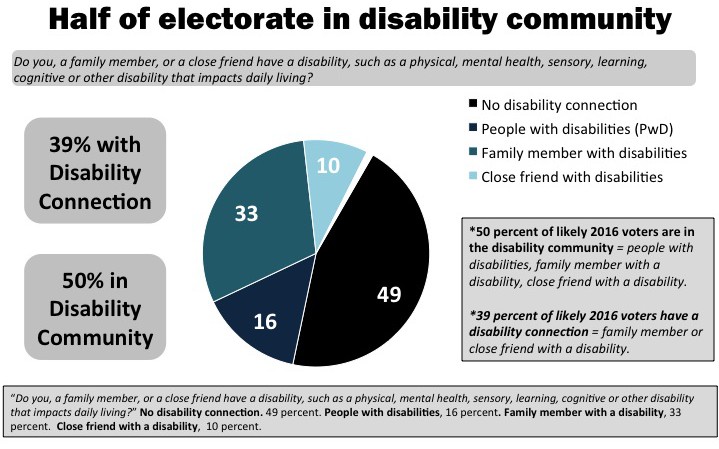 Published by Lauren Appelbaum on November 2, 2016

51% of likely voters say they personally, a family member, and/or a close friend has a disability 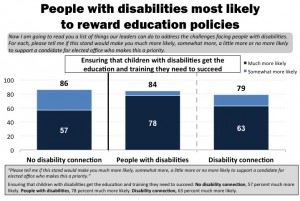 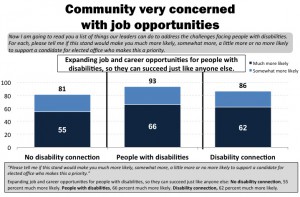 “Our nation was founded on the principle that anyone who works hard should be able to get ahead in life,” said Jennifer Laszlo Mizrahi, president of RespectAbility, a nonprofit organization advancing opportunities for people with disabilities. “People with disabilities deserve the opportunity to earn an income and achieve independence, just like anyone else. Companies including Amazon, Starbucks, Pepsi and others have shown that employees with disabilities are loyal, successful and help them make more money. If we find the right jobs for the right people, it can and does increase the bottom line of companies.” 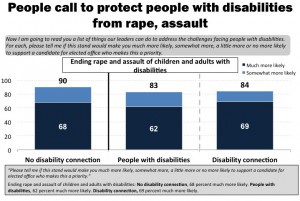 On the issue of “ending rape and assault of children and adults with disabilities,” voters are 87 percent more likely to support a candidate who makes this issue a priority.

Said Stan Greenberg, Ph.D., “This survey is a big lesson in how many people are affected by disabilities and how much it matters for elected officials to hear their very clear message. They too want politicians to do something about the risks they face and our founding principles: anyone who works hard should be able to get ahead in life. Ending rape and assault and expanding job and career opportunities matters for the partisans but most of all, for the undecided in this year’s congressional elections. They want to be heard.”

Likewise, Republican Whit Ayres commented, “We are accustomed to thinking about ‘soccer moms,’ ‘Hispanics’ or ‘values voters.’ But this poll shows that Americans with disabilities – and those who care deeply about them – are a demographic we need to pay attention to in the future.”

“Today, children with disabilities are three times more likely to be victims of rape or sexual assault than children without disabilities,” commented Mizrahi. “Every nine minutes an adult with a disability is sexually assaulted or raped. Growing up as a young adult with a disability, I know personally how traumatic this is. As a survivor of rape, it is incredibly reassuring to know how seriously voters view this problem and how it impacts their voting behavior.” 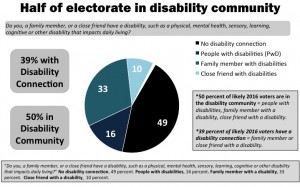 The Democratic polling firm Greenberg Quinlan Rosner and the Republican polling firm North Star Opinion Research conducted this bipartisan survey phone survey of 900 likely 2016 voters. This survey took place October 21-24 among national likely voters. Likely voters were determined based on stated intention of voting in 2016, and vote history in 2012 and 2014. Data shown in this deck is among all 2016 likely voters unless otherwise noted.

Margin of error for the full sample is +/-3.27 percentage points at the 95 percent confidence level. Of the 900 respondents, 65 percent were interviewed via cell phone in order to accurately sample the American electorate.