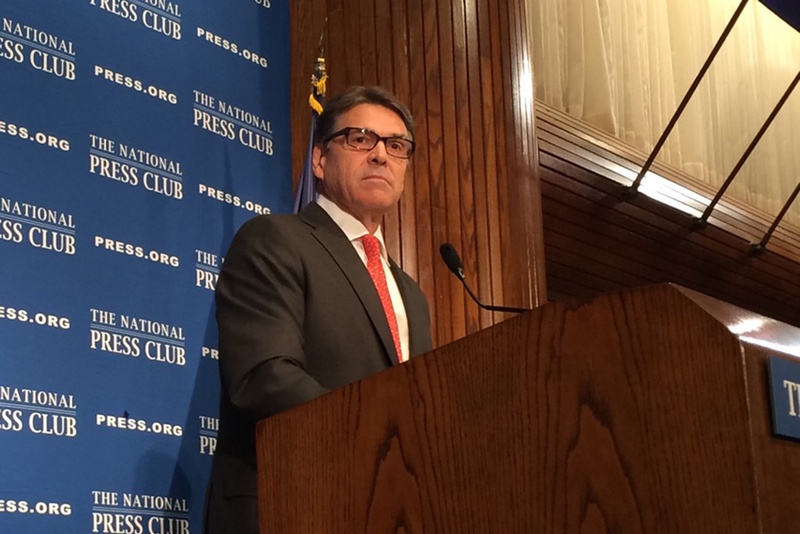 Published by Lauren Appelbaum on July 2, 2015
Washington, July 2 – In a speech largely dominated by race and economic issues, Gov. Rick Perry outlined a plan for how he would “reignite the engine of economic growth.”

“The best welfare program is a job,” Perry said in an appearance at the National Press Club on Thursday. “The only true cure for poverty is a job.”

While Perry did not specifically address the need to help people with disabilities to obtain a job as well during his speech, he did talk about the issue just before the lunch with RespectAbility staff.

Midway through his time as governor, Perry issued a proclamation declaring July 26th as ADA Awareness Day. On July 26, 1990, the Americans with Disabilities Act (ADA) was signed into law by President George H.W. Bush. This landmark piece of legislation is considered the Declaration of Independence for people with disabilities.

“I understand the importance of honoring the principles of the ADA, and have supported legislation that ensures that Texans with disabilities are better equipped to live and work in their communities,” Perry said in the proclamation in 2009. “The 81st Texas Legislature passed, and I signed into law, various bills that build on the ADA’s promise and demonstrate Texas’ commitment to improving the lives of people with disabilities. These bills include expansions in health coverage and resources for people with autism; provisions for an enhanced Medicaid buy-in program for children with disabilities; and the creation of a committee to study issues relating to Texas’ aging population. At this time, I urge all Texans to continue to work toward the principles of the ADA — equality of opportunity, full participation, independent living and economic self-sufficiency — because we all benefit when Texans with disabilities can fully participate in activities in our state.”