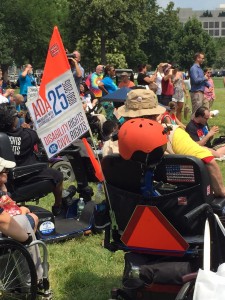 Washington, July 29 – “In the year 2015, it is unacceptable that over 80 percent of adults with disabilities are unemployed,” Vermont Senator and Democratic presidential hopeful Bernie Sanders said to the National Council on Independent Living (NCIL) during its rally on Capitol Hill Tuesday. “People need work. They need jobs.”

Sanders, who, on previous occasions when asked, has had little to say about the topic, had a lot to say to the rally participants.

“Twenty-five years ago, our nation made it illegal to discriminate against Americans who have a disability,” Sanders said. “This was a major step forward for the American people. Our job is no turning back. We’re going to go forward. We’re going to expand and strengthen that legislation.”

“In the year 2015, we have got to expand, not cut, educational opportunities, by fully funding the IDEA [Individuals with Disabilities Education Act], and vocational programs for Americans with Disabilities,” Sanders said to cheers.

“There is a housing crisis all over America,” Sanders continued. “It is especially true for people with disabilities. We need to build more affordable housing.”

America has 56 million people with disabilities, more than 20 million of whom are working age. More than 50 percent of Americans report having a family member or close friend with a disability.

Thank you very much for coming out today, look I don’t have to explain to anybody that big money and trusts have enormous influence over what goes on in Washington. They make huge campaign contributions, they have lobbyists, and everyday they influence the legislation that gets passed or does not get passed. The only way that ordinary people get their needs heard, get their issues addressed is when they stand together. When they stand up and say enough is enough, the congress and the president need to listen to all of the people and not just wealthy special interests, and that is what your presence here today is about. So thank you very much for coming.

Twenty-five years ago, our nation made it illegal to discriminate against Americans who have a disability. This was a major step forward for the American people. Our job is no turning back, we’re going to go forward, we’re going to expand and strengthen that legislation. (cheering)

There is a housing crisis all over America in terms of affordable housing. It is especially true for people with disabilities; we need to build more affordable housing. (cheering) And at this particular moment we have got to send a very loud and clear message to the republicans that NO we will not cut social security disability insurance by 19%. This is an outrage, this is a phony crisis and we’re not going to let them get away with it. (cheering) As you all know, in order to make SSDI solvent we need to reallocate funds between the social security retirement fund and the disability fund something that has been done year after year in a bipartisan way and that is something we will do this year. (cheering)

We will not allow republican leadership in congress to pit the senior population against the disability community. (Cheering) While some of our republican colleagues are talking about that by reallocating money into the disability fund we are taking funds away from the retirement fund and jeopardizing the retirement security of senior citizens. You know and I know, that is not true. (cheering) And that is why every major organization in this country representing seniors and persons with disabilities supports the reallocation of these funds. The time has come loudly and clearly, for us to tell the Republicans, stop playing games with the lives of people. We are not going to cut disability funding by 19% when billions of people with disabilities are barely getting by today. (cheering)

We are also not going to let the republicans make massive cuts in Medicare and Medicaid in order to give tax breaks to the richest people in this country. In fact, what we have got to do as a nation is draw in every other major country on earth and say loudly and clearly, healthcare is a right of all people, not a privilege. (cheering) And that is why I believe we move towards a Medicaid for all single payer program (cheering) As Franklin Delano Roosevelt reminded us many years ago, and I quote The test of our progress is not whether we add more to the abundance of those who have much. It is whether we provide enough for those who little. (cheering)

That is the struggle for today, and when we have 45 million Americans living in poverty. When we have the highest rate of childhood poverty of any major country on earth, we know what our priorities must be and that is to take care of the people in need, not give tax breaks to people who have more than enough.

Thank you all very much.