Published by Lauren Appelbaum on October 14, 2015 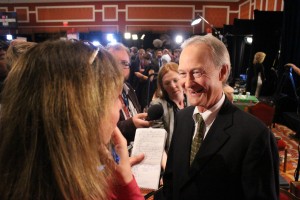 Las Vegas, Oct. 14 – Gov. Lincoln Chafee is proud of his time working to help people with disabilities while serving as governor of Rhode Island.

“As governor, I came in at the depths of the recession and we turned my state around,” Chafee said during the opening statements of the CNN Democratic Presidential Debate in Las Vegas Tuesday night. “Rhode Island had the biggest drop of the unemployment rate over my four budgets of all but one state.”

“We worked hard at workforce immersion and work for the disability community,” Chafee said in an interview with The RespectAbility Report following the debate.

While governor, he met with RespectAbility to learn how to best partner with employers to ensure that people with disabilities have the most opportunities to enter the workorce.

“I’m proud of my record as governor of Rhode Island and working with you at the NGA meeting and getting employers who open their minds about the ability that people with disabilities have to contribute.”

131,583 people in Rhode Island have a disability. Only 34 percent of Rhode Island’s 71,200 working-age people with disabilities are employed. This lack of opportunity creates poverty, powerlessness, and can even increase the likelihood of developing a mental health condition.

Today in Rhode Island 6,200 youth with disabilities between the ages of 16 and 20 are preparing to enter the labor pool.

“As we look to the future,” Chafee said during the debate, “I want to address the income inequality, close the gap between the haves and the have-nots.”