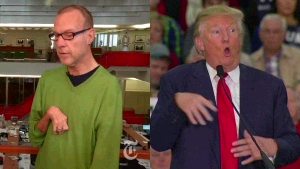 By publicly poking fun at an award-winning reporter who has significant physical disabilities, Republican frontrunner Donald Trump expanded stigmas that have been undermining people with disabilities for ages.

It’s now been more than 25 years since the passage of the Americans with Disabilities Act (ADA). True, physical architecture and some educational opportunities thankfully have changed. But negative attitudes and stigmas about people with disabilities – because of people like Donald Trump – have not. This leads to poverty, powerlessness and even worse situations for people with disabilities.

Fully one-in-five Americans have a disability. Think of the early voting states. There are 357,730 people with disabilities in Iowa, 166,258 in New Hampshire, 680,038 in South Carolina, and 357,035 in Nevada. The majority of voters either have a disability or a loved one with a disability.

A major Princeton study showed that while people with disabilities are seen as warm, they are not seen as competent.

Meanwhile, a study published by Cornell Hospitality Quarterly analyzed results from a survey of employers at 320 hospitality companies in the United States. It found that all of the companies shared a concern that those with disabilities could not do the work required of their employees.

But to see how wrong those stigmas are, all you have to do is look at Trump’s own industry – casinos. Due to mobility issues, multibillionaire Sheldon Adelson now uses a motorized scooter. Steve Wynn, who recently hosted the CNN Democratic debate at one of his Las Vegas casinos, is legally blind. In other fields, we see that Stephen Hawking is literally unlocking the secrets of the universe while living with ALS. Itzhak Perlman is one of the finest musicians alive, and yet does not walk.

Moreover, the media is missing that this recent event with New York Times reporter Serge Kovaleski is not the first time that Mr. Trump insulted people with disabilities. Earlier Trump had derided Charles Krauthammer, a leading conservative columnist and commentator who is a wheelchair user, calling him a “loser” who “just sits there.”

Indeed, one of Trump’s favorite words is stupid. He uses it interchangeably with the word loser, as if having a low I.Q. automatically and instantly makes you a failure.

I’m dyslexic, and couldn’t really read or write until I was 12. If I had a dollar for each time I was called “stupid” or a “loser,” my bank account might look like Trump’s by now. Fortunately for me, however, I was able to use my weakness as strength. I learned from an early age how to use problem-solving skills to get ahead.

According to both the U.S. Census Bureau and the Centers for Disease Control and Prevention, fully one in five Americans – that’s 56 million of us – has a disability. A disability is a physical or mental impairment that substantially limits one or more of the major life activities of an individual. People with disabilities are the largest minority group in America. We are also the only minority group that anyone, due to accident or illness, can join at any time.

Each year approximately 300,000 young people with disabilities in our country age out of school, and hope to get into the workforce. However, only about a third of them will work. For people with a cognitive disability, less than 20 percent will achieve employment today. They needlessly become the “losers” of our nation. This is a human disaster of epic proportions and it is our own making. We need to see the abilities of all people.

Today failed policies, stigmas and low expectations are leaving the real talent of millions of Americans on the sidelines. Fully 11 million Americans are living off of government disability payments. Real reforms that encourage work are needed.

Before he was the Republican presidential frontrunner, the billionaire businessman was the host of The Apprentice. Winners of Trump’s reality TV show got to work at the Trump organization, where they could gain the skills and contacts they need to succeed. Now, with his “Make America Great Again” campaign, I hope Trump wants to give every American the chance to succeed.

Last week, in Newton, Iowa, Justin Chappell, a reporter for The RespectAbility Report who uses a wheelchair, asked Trump a question, and the presidential hopeful did stop and give Chappell the respect a person deserves. He did comment on Chappell’s looks, telling him “he looks good,” showing how Trump is hyper-focused on looks.

During the interview, Trump said, “I will” when asked if he is committed to getting more veterans and people with disabilities employed.

“You gotta give them hope, build their spirit,” Trump said. “The unemployment numbers don’t tell the whole story.” That was a hopeful moment.

But I’d like to see fewer insults and more ideas on what Donald Trump, the entrepreneur, and all the other candidates have to say about the entrepreneurship and enterprise of Emilea Hillman, a young woman with developmental differences who is now a coffee shop owner in Independence, Iowa. She’s a winner – and we need for far more people like Hillman to succeed.

Young adults, who, due to a significant intellectual disability, are not diploma bound, can stay in public school until age 22. Thus, at age 20 and 21, they may still be working on basic math problems, or how to read at a third grade level. But when they turn 22, the school bus stops coming. They have no place to go. It’s as if our nation created a “wall” just for them. They can spend decades sitting on their parents’ couch, living on government benefits, until their parents die. Then they frequently move to their sibling’s couch, or into an expensive group home, while the taxpayers keep paying the bills. They face loneliness, have poor health outcomes, and their talents are wasted. Called “losers” as children, it becomes a self-fulfilling prophecy when they are adults.

However, with good leadership, these same young adults could have a shot at real success. Evidence shows that for people with developmental and other disabilities, spending their last school year in apprenticeships, internships and supported employment can mean a lifetime of independence.

Millions of Americans with and without disabilities are waiting eagerly for Mr. Trump and all the other candidates from both parties to tell us what specifically they will do to create more “winners.”