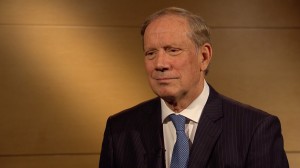 Washington, Dec. 12 – Former New York Gov. George Pataki discussed his experience with enforcing the Americans with Disabilities Act in New York and the use of assisted technologies to assist people who are deaf or blind in an exclusive interview with a coalition of disability groups including RespectAbility, Paralyzed Veterans of America and the National Association of Councils on Developmental Disabilities.

“The potentials aren’t limited by the status quo of where we are today,” Pataki said. “The potential is where we can be tomorrow and that is how government has to think.”

Read the full transcript of Gov. George Pataki’s interview with The RespectAbility Report:

The RespectAbility Report: Gov. Pataki, when you are president, or in a Pataki administration, what would you do for people with disabilities in America?

Gov. George Pataki: Well, first of all, I think it is important to uphold the laws that require access that President George H. W. Bush signed. I think it is a very positive law and it is impacting those that are disabled in a very positive way. We have to enforce it. But beyond that, it is not just a question of mobility; it is a question of why you are going somewhere and to have more economic opportunities for people who are handicapped, for people who have disabilities, for people who cannot walk, is absolutely critical.

I think of a friend of mine in the legislature in New York State that lost both of his legs in Vietnam and yet courageously still carries on today as a productive, hard-working citizen now outside of government. I just know there is so much talent there that we have to have an outreach program to make sure that potential employers and potential careers are open to people regardless of their disabilities.

The RespectAbility Report That is very helpful Governor. What do you think could specifically help people with disabilities who might be deaf or might be blind? Have you looked at assisted technologies?

Gov. George Pataki: There is assisted technology for the deaf that is used by phones so that they have the capability to communicate over a phone using a texting system. And we are very fortunate to live in the 21st century where we have these certain potentials to develop these technologies and it is just not going to happen because of organizations that are committed to helping the disadvantaged, it is going to require the support of the government.

Certainly if I have the opportunity to lead, we are going to reach out and bring in advocates for those with disabilities and look at those technologies that can empower them in ways that we haven’t even thought of yet.

The RespectAbility Report: When you were governor, you must have had many interactions with the disability community. What can you tell me and other views about some of the successes you have had?

Gov. George Pataki: You know, I think the most important thing given New York being New York, is the mass transit. And we had a great many disabled who simply could not get on a bus, could not take or get on the subway or train and we took a number of initiatives and some were required by the federal law but some were just imposed by the state itself to make things easier.

To give you an example, I live up in the Hudson Valley and I often take the train into New York City and you have to go up and down steps. We elevated the platforms so that now you can go on at the same level and put in elevators so that they are now accessible and so that matters and we have to do that. But we have to go beyond that. We want to make sure that there are opportunities, career opportunities, business opportunities for those disadvantaged, and I am confident that with all the technology that is available in the 21st Century that we will be able to find a myriad of ways to get this done.

And just one other example of something that I did is I became friends with Christopher Reeve who played Superman and was in a horse riding accident and a quadriplegic. I worked with him and advocates for the disabled to help overcome those disabilities through technology. Not just things like mechanical devices that are capable of moving, but artificial intelligence that can create movement where hadn’t existed. Stem cell research to help regenerate nerves that had been damaged. And this is all things that the 21st century that we should be looking at with an open mind because the potentials aren’t limited by the status quo of where we are today, the potential is where we can be tomorrow and that is how government has to think.