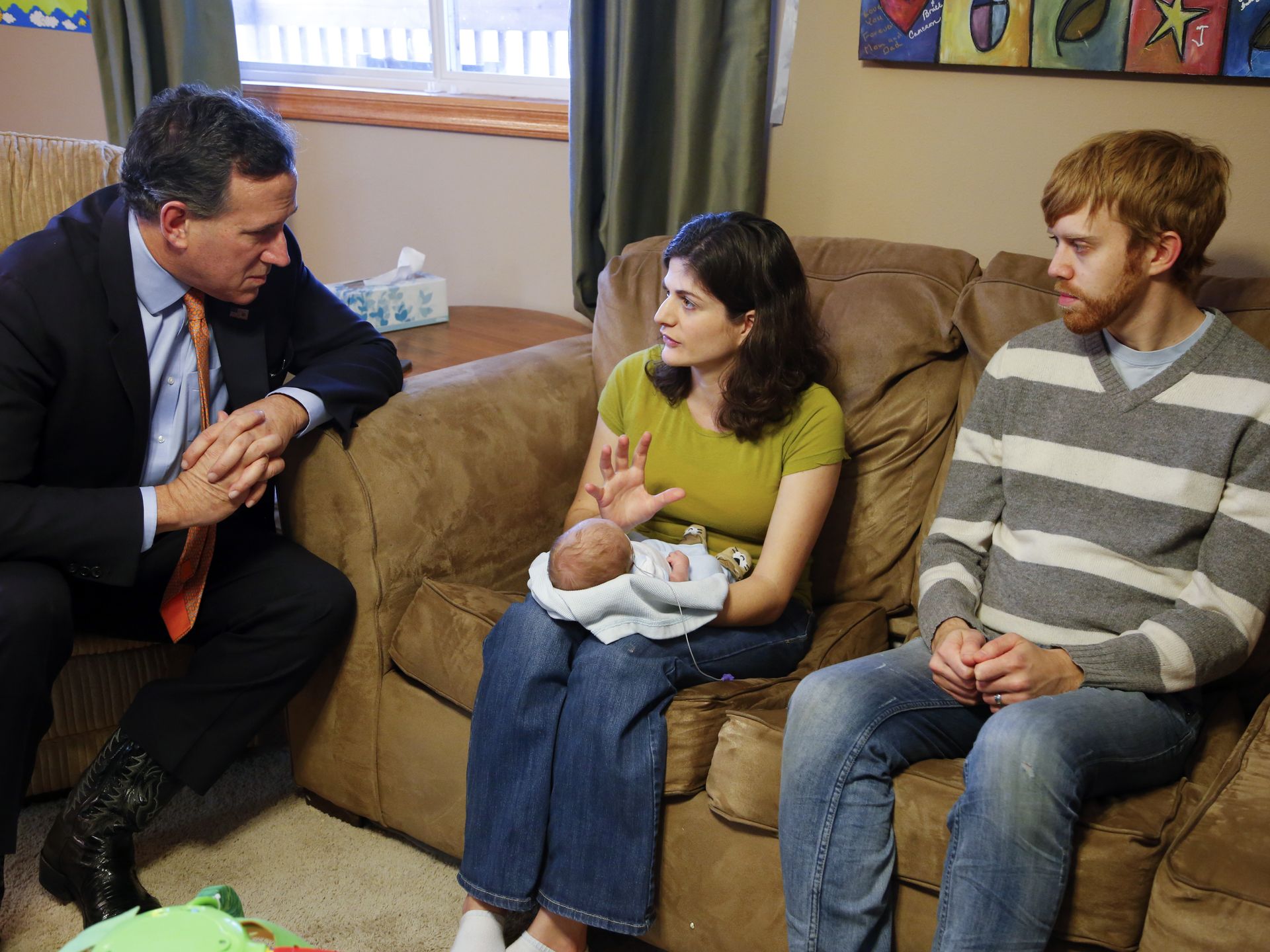 Published by Lauren Appelbaum on January 10, 2016

Santorum’s daughter, Bella, also was also born with Trisomy 18. According to the National Institutes of Health, many newborns with Trisomy 18 die before birth or within their first month and only five percent to 10 percent survive past a year. Bella is beating the odds and is now seven years old.

Santorum spent a few hours with the Buck family, asking them questions about Alex’s condition and giving them advice on how to keep their home sanitized to reduce the potential for infections and colds. He also shared his experiences about needing to be fierce advocates for his child’s life.

“It is a battle,” Santorum told the couple. “You have to battle for their care.”

“I always say Bella never has a bad day. She gets up and it takes her a while to get up. She takes her time. But once she is awake, she is just the happiest, sweetest kid in the world all the time,” he said. “Absolutely no stress. She will just hang out and watch TV with you. If you are playing a game, she will hang out with you and be happy as a clam … She is an emotional picker-upper.”

In a December interview with The RespectAbility Report, the former Senator said his daughter Bella is his inspiration for helping people with disabilities to live fully in society.

“Everybody has potential and that, we as a society, have to work to integrate people to make sure that there’s opportunities for people to rise in society,” Santorum said.

He also recalled suspending his 2012 campaign for a few days when Bella was hospitalized.

“When we came back on the campaign trail, it was a very different place,” he said. “So we experience this miraculous recovery, but it gave our campaign pause, but it also focused the national attention on the fact that we had a child with a disability.”

Prior to this, Santorum said, he did not highlight Bella. After returning to the campaign trail, “at every event we had people with disabilities,” he recounted.

“It provided, I think, a very strong and important sign of the value, no matter how disabled, the value of every child. And every person.”

Before he left the Buck’s home, Santorum smiled at Alex, telling the baby, “Good job, buddy. Good job. You are going to be a world beater.”

He told Katie and Ryan, “Everything is going to be OK. It will be. Everything will be fine. God bless you.”

While Santorum is barely getting one percent in Iowa polling, he continues to spend a lot of time in the state; he has spent more days in the first caucus state than any other Republican contender.

Katie told a reporter later she and her husband will caucus for Santorum if it is possible to briefly leave their home.