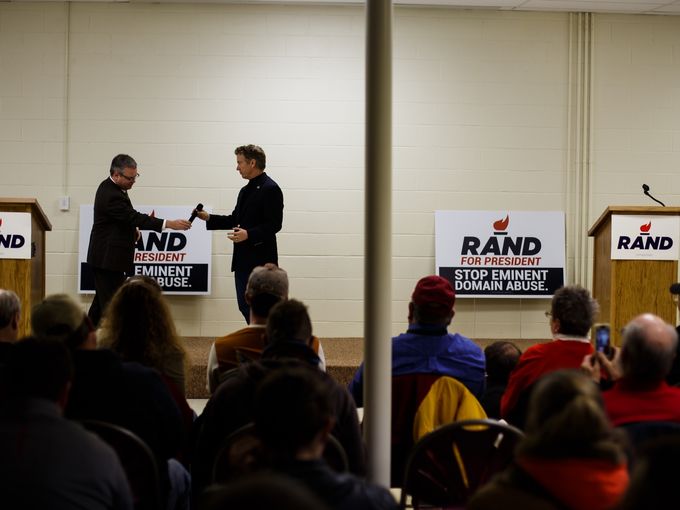 Rand Paul on SSDI and Healthcare for People with Disabilities

Paul said 50 percent of people receiving SSDI are doing so because of back injuries.

According to a December 2014 report from the Social Security Administration, just 28 percent of those who were issued disability benefits reported “musculoskeletal system and connective tissue” diseases, which would be related to back problems. Another 4.9 percent of people receive disability checks for “injuries,” which also could be related to back problems.

He has come under scrutiny for these claims before. Last year in New Hampshire, the presidential hopeful said “over half of the people on disability are either anxious or their back hurts. Everybody in this room knows somebody who’s gaming the system.”

According to a CNN report, SSDI fraud is not as common as Paul says it is:

The Social Security Administration has often cited a figure that disability fraud amounts to less than one percent of cases. Conservatives have disputed that figure, but what’s clear is that the number of applications referred to investigators and then the number of cases actually determined to be fraudulent are in the thousands – not the tens or hundreds of thousands, which would indicate a significant percentage.

Paul’s solution to reduce fraud is that people claiming a disability should not go to their family doctor but instead see a “doctor you’ve never seen who assesses you very objectively.” In addition, he called for regular check-ins to ensure that individuals still need to be on disability.

“The bottom line is that we don’t have enough resources for everything, you are going to have stricter scrutiny,” Paul added. “If you are able to work in any capacity, you will feel better about yourself if you do work and we ought to attach work to anything we do.”

Paul also said people with certain disabilities like back injuries should look for jobs in other industries that do not require heavy lifting like construction.

At the campaign stop that was listed as a town hall meeting on eminent domain abuse, the issue was never raised in the meeting that lasted less than an hour. Even with signs behind the senator stating his desire to fight against government agencies taking the land of local Iowans, he still never mentioned the topic. Instead, he spoke about a variety of other topics including disability issues such as SSDI and healthcare.

Regarding healthcare, the Kentucky senator called for more capitalism, saying that would solve a “whole host and range of problems” including the more expensive needs for people with disabilities with pre-existing conditions.

“Ultimately what we need to recognize with healthcare is that while there are special problems to healthcare, what kind of economic system distributes the most services and goods than anything else,” Paul said. “Communism distributes goods very poorly and capitalism does it greatly, so we need to do is figure out how to have more capitalism in healthcare.”

He said “shortening patents” would open up free market competition and significantly reduce the cost of prescription drugs.

Paul also called for multi-year insurance, saying it would resolve the issue of individuals with pre-existing conditions.

Parents can purchase insurance during pregnancy for a very small amount for “unusual conditions that some kids are born with,” making it affordable for all. “Having multi-year insurance helps if your child isn’t sick at first but gets very sick with an unusual illness for the rest of their life,” Paul added.