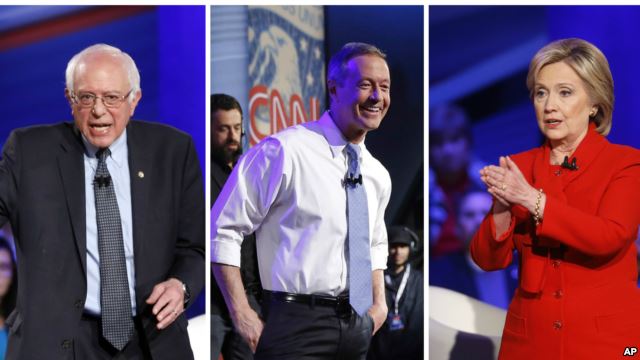 Published by Lauren Appelbaum on January 27, 2016

Washington, Jan. 27 – Many minority groups were highlighted at this week’s Democratic Town Hall, with questions ranging from racial inequality to LGBT rights. However, the largest minority group – the 56 million people with disabilities – was not. Even though there were no direct questions, all three candidates brought up issues important to the community.

Secretary Hillary Clinton gave a shout out to Sen. Tom Harkin, who has endorsed Clinton, and the Americans with Disabilities Act (ADA), of which Harkin was a co-author.

“He knows from his years in the Congress, you always have to hope you can find common ground,” Clinton said of Harkin while answering a question about working with Republicans. “You got to bring people together like he did. The Americans With Disabilities Act, what an amazing accomplishment.”

While Clinton did not go into detail about the ADA or disability-related issues, the fact that she brought it up is progress for the disability community.

In July, all five of then Democratic party presidential candidates attended the Iowa Democratic Party Hall of Fame Dinner in Cedar Rapids, Iowa. Each of the five candidates addressed the crowd and talked about issues that were important to them: raising the minimum wage, eliminating college debt, increasing human rights, etc. In spite of the upcoming 25th anniversary of the passage of the ADA that month, not a single candidate mentioned the word “disability” nor did they talk about the rights and/or employment of people with disabilities.

At the annual Jefferson-Jackson Dinner at Hy-Vee Hall in Des Moines in October, the tide had begun to change as Clinton talked about Autism and mental illness.

Now, both Clinton and rival Sen. Bernie Sanders have platforms on their websites targeting Americans with disabilities. Clinton has released an Autism plan and Sanders has filled out the #PwDsVote 2016 Campaign Scorecard, which Clinton’s campaign promises to complete this week. Former Maryland Gov. Martin O’Malley also has talked about disability issues while on the campaign trail.

“One in five Americans has a disability and the majority of voters have a loved one with a disability. In past elections, we have been ignored. During the 2016 campaign season, we will determine the outcome of the election,” said Jennifer Laszlo Mizrahi, president of RespectAbilityUSA.org, a nonprofit disability opportunities organization.

During the Town Hall Monday evening, a mother of three grown children asked Sanders about easier access for mental health care. Sanders spoke about his single-payer healthcare plan, stressing that it would cover mental health issues as well.

“When I talk about health care for all, I absolutely include in that the fact that mental health should be treated as part of health care, should be available to all people,” Sanders said to loud applause.

He talked about receiving calls through his senate office from constituents looking to help family members and unable to find mental health treatment that is affordable and accessible.

“We have got to move in the direction of making sure that everybody in this country that has a mental health crisis gets health care when they need it, not months from today,” Sanders added.

O’Malley responded by saying one of his “strategic goals is full employment” for veterans returning from Iraq and Afghanistan. By doing so, it would pave the path to then tackle th other issues such as PTSD and mental health.

“We need to have a transition program so that none of our veterans slip through the cracks,” the former governor said. “We do a very poor job of transitioning our veterans back to civilian life. And I have found, as a governor attacking this problem, that the key is employment. Talking to our veterans about employment.”

Seventy percent of working-age Americans with disabilities, which includes veterans returning with physical and mental disabilities, are outside of the workforce. This leads to poverty and costs taxpayers billions of dollars in disability benefits.