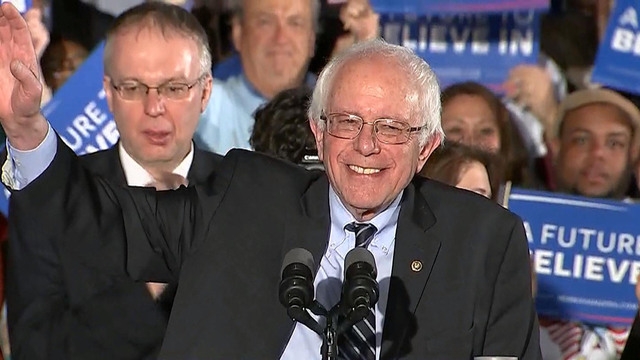 Sanders: Must Fight for Disability Rights

Published by Lauren Appelbaum on February 10, 2016

Concord, N.H., Feb. 10 – During last night’s victory speech celebrating his win of the New Hampshire primary, Sen. Bernie Sanders excited the disability community when he included a shout out for disability rights.

“We must pursue the fight for women’s rights, for gay rights, for disability rights,” Sanders said to applause.

Disability leaders tweeted it out, happy for the mere mention of the phrase “disability right.”

.@BernieSanders you have no idea how much it means to me that you vocally acknowledged people with #disabilities. #PwDsVote

This addition to Sanders’ stump speech is worth noting, and important. Though, as @elizabethadrina pointed out, “we’re all just happy to be included which isn’t a good place to be.”

Sanders was the first candidate to complete the #PwDsVote 2016 Campaign Questionnaire. Yet he rarely talks about these issues on the campaign trail unprompted.

In his answers to the questionnaire, Sanders says, “for my entire career in politics, I have gone about legislating in a grassroots manner, and that includes fighting to ensure that our society is one where persons with disabilities can live full and productive lives.”

His solutions, as outlined in the questionnaire, include helping people with disabilities become small business owners, yet he has not discussed this on the trail.

At a July rally with the National Council on Independent Living, Sanders said, “In the year 2015, it is unacceptable that over 80 percent of adults with disabilities are unemployed. People need work. They need jobs.”

But little has been discussed since the summer.

In response to a question on this topic in December, Sanders called for the end of bigotry and discrimination of people with disabilities.

“That is discrimination against people whose skin may be different than ours or the nation they were born in, or they may or may not have a disability,” he said in Knoxville, Iowa.

Recently, democratic rival Hillary Clinton also has adjusted her stump speech in order to include people with disabilities on a regular basis beginning at the MSNBC Democratic debate Thursday evening and repeated several times including at a town hall with New England College students in Henniker, New Hampshire. Yet Clinton did not include the disability community in her speech following the New Hampshire primary results last night.