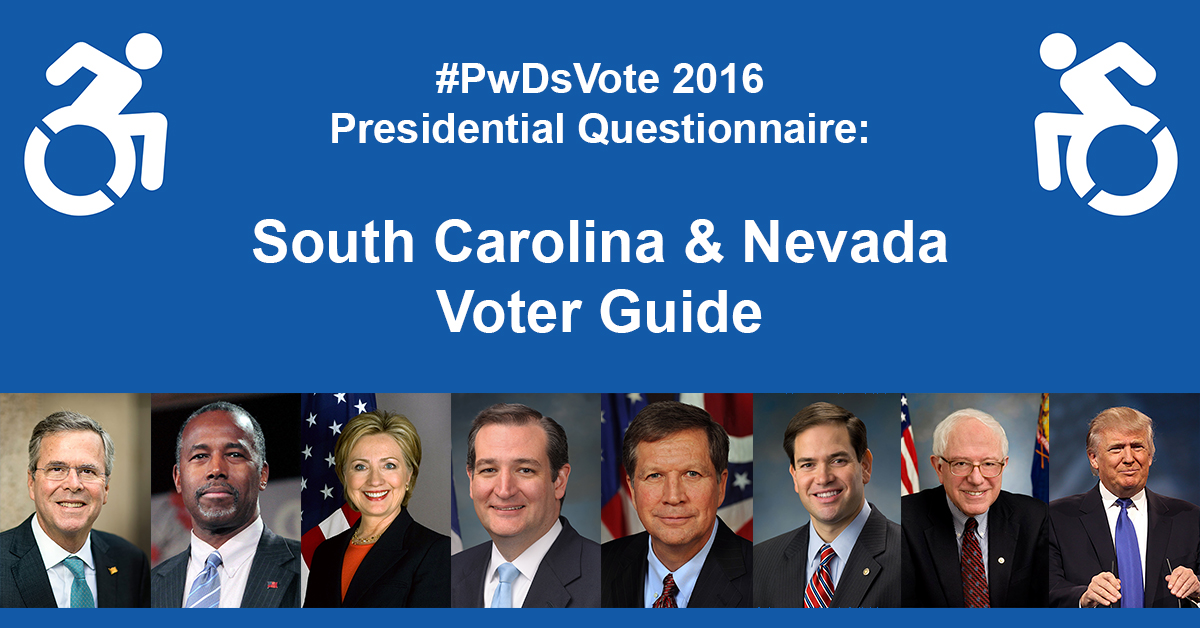 Published by Lauren Appelbaum on February 18, 2016

Washington, Feb. 18 – RespectAbility released its South Carolina and Nevada update to its #PwDsVote 2016 Campaign Questionnaire for people with disabilities (PwDs). More than half of the presidential candidates from both sides of the aisle have responded to the questionnaire.

The questionnaire asked all of the presidential candidates on both sides of the aisle to comment on 16 disability questions. Former Gov. Jeb Bush, former Sec. of State Hillary Clinton and Sen. Bernie Sanders responded by addressing all of the questions. Dr. Ben Carson, Gov. Chris Christie (who has since suspended his candidacy) and Gov. John Kasich also filled out parts of the questionnaire.

The candidates have dramatically different ideas about how to deal with the issues including employment, stigma, education, safety, transportation, housing, healthcare, foreign affairs and other issues. RespectAbility is nonpartisan and does not endorse candidates. The questionnaire is purely for educational purposes as voters go to the polls.

Today in South Carolina, 15,700 youth with disabilities, between the ages of 16 and 20, are preparing to enter the labor market. The same is true in Nevada where 8,200 young adults with disabilities are hoping to find work. They have high expectations and deserve the opportunity to achieve the American dream. Young people with disabilities may simply need some thoughtful help to transition into the workforce.

One employer in South Carolina that has provided an exemplar model for other businesses to follow in hiring individuals with disabilities is Walgreens. They have taken an active role in ensuring that that they have an opportunity to thrive in a work environment and derive a true sense of accomplishment. Walgreens first began this program at their distribution center in Anderson, South Carolina and now 42 percent of their employees have a disclosed disability including workers with a range of developmental and intellectual differences. In Nevada, PEPSI and Starbucks each have model inclusion programs for employees with disabilities. Each of these companies stands as a great example of win-win-win policies that help employers, people with disabilities and taxpayers alike.