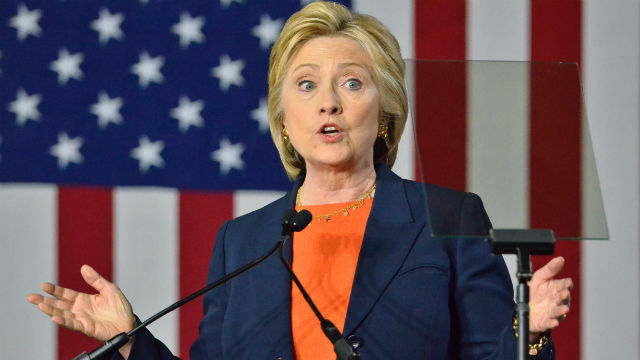 Washington, June 3 – In a speech outlining reasons Hillary Clinton finds Donald Trump to be unqualified for president, the likely Democratic nominee included Trump’s assumed mocking of a journalist with disability as one such reason among her lambasting of the presumptive Republican nominee on his foreign policies.

“And it also matters when he makes fun of disabled people, calls women pigs, proposes banning an entire religion from our country, or plays coy with white supremacists,” Clinton said Thursday in San Diego, California. “America stands up to countries that treat women like animals, or people of different races, religions or ethnicities as less human.

“Disability is an issue that is really still in the shadows,”RespectAbility President Jennifer Laszlo Mizrahi said. “There’s so much stigma around disability that people don’t really talk about it publicly.”

Clinton and Sen. Bernie Sanders, who also is vying for the Democratic nomination, are working to change that. Neither are taking the disability vote for granted.

“Twenty percent of Americans (56 million) has a disability so if any candidate wants to be elected president of the United States, they are going to need the votes of people with disabilities,” Mizrahi said. “Presidential candidates need to work for all of us. They need to represent all of us.”

No word yet from Trump, whose website’s “issues” section does not mention people with disabilities, and who has gone on in little detail regarding his positions on disability-related policies.

“The nominee for a president is the leader of the party,” said Mizrahi. “And we would like to see the nominees of both parties embrace opportunities for people with disabilities.”

Mizrahi added, “There are many Republican governors whom are amazing on employment issues for people with disabilities, including Wisconsin’s Scott Walker, South Dakota’s Dennis Daugaard and Iowa’s Terry Branstad. There are leaders in Congress like Rep. Cathy McMorris Rodgers. We want to see BOTH parties do the right things at the presidential level as well.”

As pollsters and campaign managers on both sides of the aisle have said, Trump is running out of time to define himself for the general election. Unlike many of the primary contenders for the Republican nomination, Clinton is not waiting to try to define Trump to the general election voters.

Said Mizrahi, “As the presidential candidates look on to the general election, reaching out to the disability community can mean the difference between winning or not. Swing voters with disabilities and their families are up for grabs — and the actions that campaigns take to reach out to these voters can make the difference between winning and losing.”