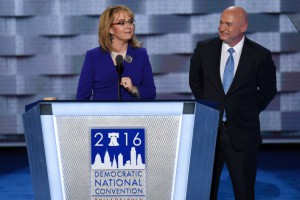 Philadelphia, July 28 – When Gabrielle Giffords took the stage with her husband, Mark Kelly, they electrified the audience.

Speaking on the third night of the Democratic National Convention, Giffords used her time to both call attention to the rising gun violence in the country and give a rousing endorsement of Hillary Clinton.

“Hillary is tough. Hillary is courageous. She will fight to make our families safer. In the White House, she will stand up to the gun lobby,” said Giffords, who served as a congresswoman from 2006 to 2012.

In 2011, Giffords was the victim of an attempted assassination. Jared Lee Loughner shot Giffords in the head and killed six others. A year later while still receiving physical, occupational and speech therapy following the severe brain injury, Giffords resigned from Congress.

Giffords is more than the standard disability narrative: not a subject for pity but an icon of strength, perseverance and personal progress. She serves as role model for other people with disabilities can carry an agenda.

Since leaving Congress, she and Kelly have formed the advocacy group, Americans For Responsible Solutions, dedicated to reforming gun laws in the United States and reducing the levels of gun violence in American society as a whole.

Although she remains a committed Democrat, Giffords is and always has been a strong proponent of bipartisanship in American politics, and both Republicans and Democrats have supported her through her unexpected disability.

Since the enactment of the Americans With Disabilities Act with widespread bipartisan support in 1990, disability rights has been a concern for both major parties, and one of the few issues where a productive consensus consistently has been reached.

Giffords’ success and her goals are emblematic of the bipartisan consensus on the need to support and empower people with disabilities.