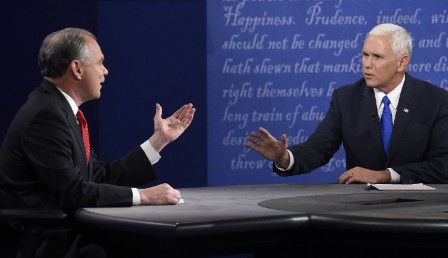 Pence Includes People with Disabilities as One of the Most Vulnerable

Published by Lauren Appelbaum on October 5, 2016

Republican hopeful Pence was the only candidate to even mention the word, while answering a question about abortion.

Pence’s remarks are nearly identical to a tweet he sent after signing a bill, HB 1337, that prohibited a person from performing an abortion if the pregnant woman wants to have one due to specific factors of the fetus including a diagnosis or potential diagnosis of Down syndrome or another disability.

I believe that a society can be judged by how it deals with its most vulnerable – the aged, the infirm, the disabled and the unborn.

In June a federal judge blocked the law. Many women today who learn they are carrying a fetus with Down syndrome choose to abort.

Disability advocate and journalist David Perry, who has a son with Down syndrome, wrote that HB 1337 and laws like it won’t help people who have Down syndrome.

“They aren’t really intended to do so,” Perry wrote in USA Today. “The goal of this law is to silence women and doctors by criminalizing conversations about abortion. People with Down syndrome are just collateral damage because that’s going to make the words ‘Down syndrome’ even scarier.”

Kaine, who has a history of working to help people with disabilities, did not talk about people with disabilities at all during the debate. The disability community was looking for the candidates to talk about their needs. Kaine had an opportunity to talk about Clinton’s record – including her responses to both the #PwDsVote and REV UP presidential questionnaires – in contrast to Trump’s relative silence on the issue with the exception of mocking a journalist with a disability.

A recently released Pew poll shows that voters with disabilities span the political and demographic spectrum and can determine who wins the elections.

Historically, disability issues have been nonpartisan.

President Ronald Reagan worked to ensure that all Americans have the opportunity to achieve the American dream. Under his administration, the Americans with Disabilities Act (ADA) took its initial steps. President George H.W. Bush signed it into law. This act enabled millions of Americans with disabilities to have a hand up, not a hand out, as they were able to go into schools, civic institutions, and the workforce to create a better future for themselves and their families.

Political campaigns know that this is a swing vote and Sec. Hillary Clinton has made this a new centerpiece of her campaign. Likewise, Republican Sen. Richard Burr in North Carolina has made it central to his re-election effort.

More than 50 percent of Americans report having a family member or close friend with a disability. Independents have the largest number of voters who say they have a disability, with 58 percent saying yes. This shows that swing voters with disabilities and their families are up for grabs.