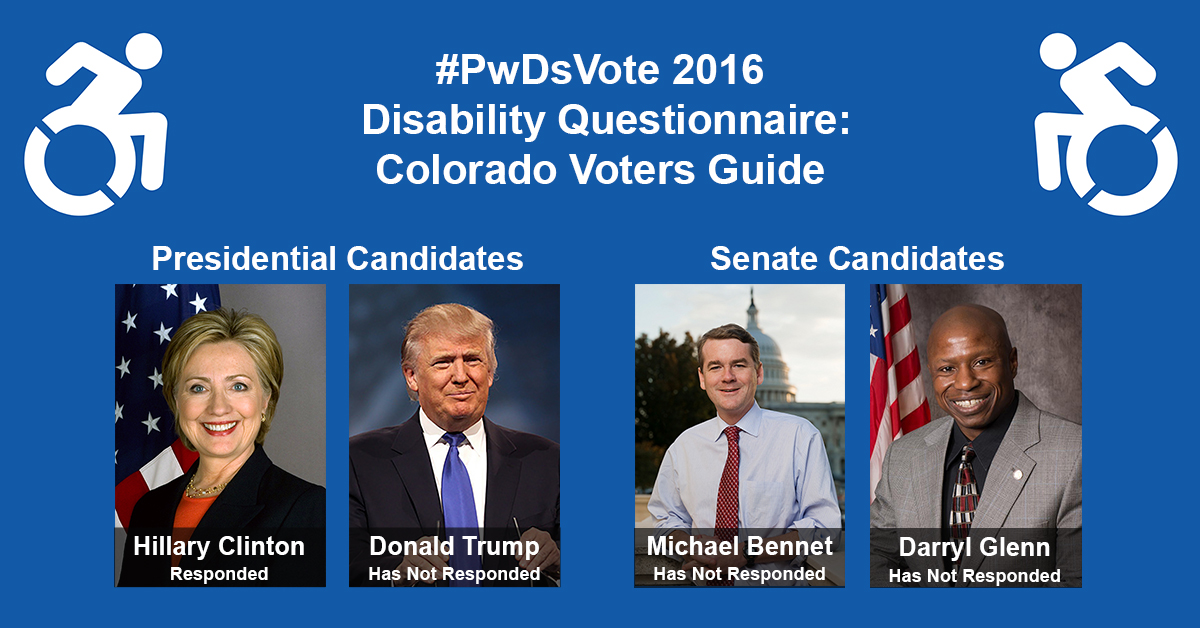 Washington, Oct. 13 – As voters get ready to head to the polls in Colorado, RespectAbility is releasing its Colorado Disability Voter Guide for the upcoming senate and presidential elections. Republican candidate Darryl Glenn is challenging Democrat incumbent Michael Bennet for the seat. Unfortunately for the 560,237 citizens with a disability living in Colorado, neither candidate has completed the #PwDsVote Disability Campaign Questionnaire for Senate and Gubernatorial Candidates for people with disabilities.

Colorado Needs to Improve Outcomes for Citizens with Disabilities
There are 300,186 Coloradans with disabilities who are between the ages of 18-64. Additionally, there are 15,700 Coloradans ages 16-20 with disabilities. More than 76,000 Colorado students have individual education plans (IEPs). However, many Coloradans with disabilities have not yet received a disability diagnosis they need, and thus are not yet receiving the school accommodations and supports that they need to succeed. Many students who might need support to succeed academically instead find themselves trapped into a lifetime of poverty or flowing down the school to prison pipeline.

RespectAbility, founded in 2013, is a nonpartisan, nonprofit organization working to end stigmas and advance opportunities for people with disabilities. It has submitted comments for all 50 state’s drafts of the Unified Plan as required under Section 102 of the Workforce Innovation and Opportunity Act (WIOA). According to Colorado’s written state plan, there are critical commitments to accessibility in American Job Centers. Colorado’s state plan also engages with many of the most important workforce issues related to expanding opportunities for people with disabilities. Thanks to WIOA, Colorado has the opportunity to build on these commitments and continue improving outcomes in terms of competitive, integrated employment for people with disabilities.

One of the most important facets of WIOA is that it raises expectations for youth with disabilities and assists states to provide them with the supports they need to ensure success. Young Coloradans with disabilities are an untapped resource that can be trained to bridge that gap. Indeed, a recent detailed study by the Kessler Foundation and the University of New Hampshire shows that 70 percent of working age people with disabilities are striving for work.

Remember to Vote
Colorado residents can vote for the candidates of their choice either on the standard voting schedule or through early voting. Coloradans have until Oct. 31, 2016, to register to vote for the election. To register to vote, residents can apply online. More information regarding voting can be found at: Voter Registration in Colorado. Voters also can cast an early vote starting Oct. 24 through Election Day. Any registered Colorado voter can cast an early vote. All registered Colorado voters will automatically receive a mail ballot, allowing them to vote by absentee ballot. Absentee ballots must be received no later than 7:00 p.m. on Nov. 8. More information regarding absentee ballots can be found at: Absentee Voting Information.