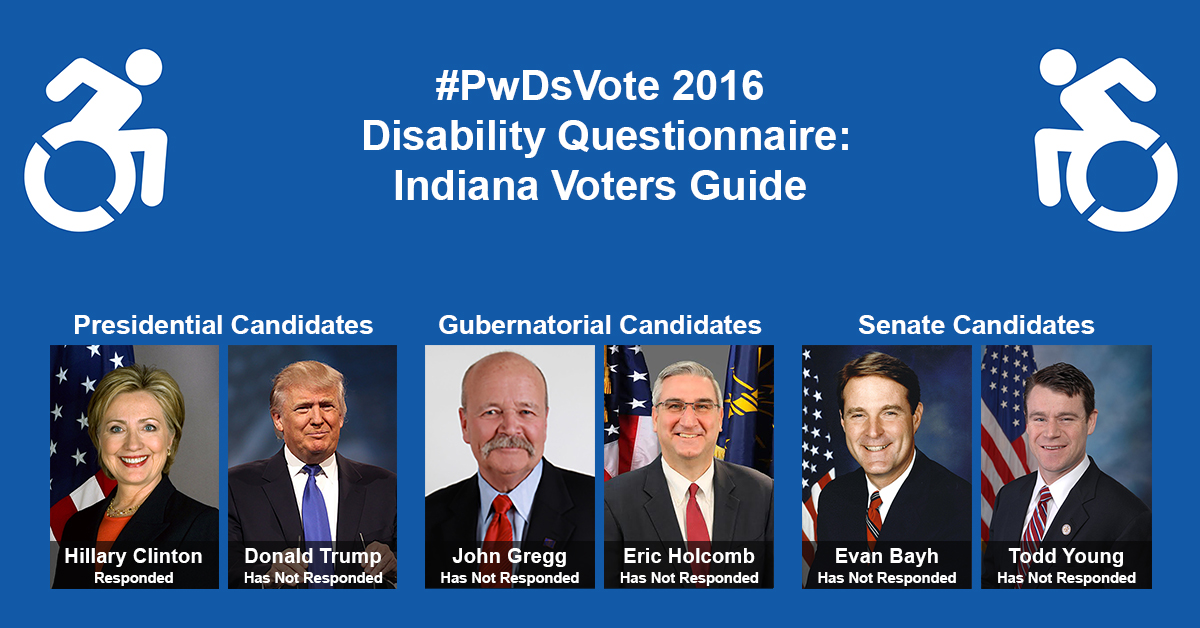 Gubernatorial and Senate Candidates Have Yet to Complete #PwDsVote Disability Questionnaire

Washington, Oct. 13 – As voters get ready to head to the polls in Indiana, Respectability is releasing its Indiana Disability Voter Guide for the upcoming gubernatorial, senate and presidential elections. Both of Indiana’s gubernatorial and Senate elections are open, with Democrat John Gregg and Republican Eric Holcomb seeking the governorships and Democrat Evan Bayh facing Republican Todd Young for the senate seat. Unfortunately for the 898,434 Indianans with a disability, both Bayh and Young declined to complete the #PwDsVote Disability Campaign Questionnaire for Senate and Gubernatorial Candidates for people with disabilities while Gregg and Holcomb have not yet responded. Twenty-three other candidates for Senate, as well as nine candidates for governor, from both sides of the aisle (19 Democrats, 13 Republicans) have responded so far, showing that disability rights is a nonpartisan issue. The responses also are geographically-diverse, coming from states all around the country, as politicians are paying more and more attention to the disability community. On the presidential level, Democrat Hillary Clinton has completed the questionnaire while Republican Donald Trump has yet to do so.

Indiana Needs to Improve Outcomes for Citizens with Disabilities
There are 482,228 Indianans with disabilities who are between the ages of 18-64. Additionally, there are 25,500 Indianans ages 16-20 with disabilities. More than 150,000 Indiana students have individual education plans (IEPs). However, many Indianans with disabilities have not yet received a disability diagnosis they need, and thus are not yet receiving the school accommodations and supports that they need to succeed. Many students who might need support to succeed academically instead find themselves trapped into a lifetime of poverty or flowing down the school to prison pipeline.

RespectAbility, founded in 2013, is a nonpartisan, nonprofit organization working to end stigmas and advance opportunities for people with disabilities. It has submitted comments for all 50 state’s drafts of the Unified Plan as required under Section 102 of the Workforce Innovation and Opportunity Act (WIOA). Indiana’s state plan has many good points and demonstrates the implementation of best practices, which only can improve outcomes for people with disabilities.

The Indiana Career Council and Regional Work Councils plan to expand their networks, increasing their number of partnerships with other organizations in hopes of becoming the ideal model to guide the transformation needed in the workforce system. Advances are being made regarding the implementation of certain programs as well. The Courtyard Muncie at Horizon Convention Center is a teaching hotel that aims to prepare young people with disabilities for careers in hospitality and food service. This is a unique example of innovation and opportunity in action. Additionally, Indiana is investing more in the successful Project SEARCH program. This job-training program has a 70 percent success rate in placing people with disabilities in full employment, and has seen success nationwide.

One of the most important facets of WIOA is that it raises expectations for youth with disabilities and assists states to provide them with the supports they need to ensure success. Indeed, as Indiana’s Baby Boomers retire and your state’s economy evolves, employers are starting to experience increasing talent shortage. Indianans with disabilities are an untapped resource that can be trained to bridge that gap. Indeed, a recent detailed study by the Kessler Foundation and the University of New Hampshire shows the 70 percent of working age people with disabilities are striving for work.

Evidence shows that people with disabilities can provide a wonderful solution to companies and other employers that want to succeed. The diverse skills, greater loyalty and higher retention rates of people with disabilities are already starting to meet employer talent needs in increasing numbers around America. With WIOA, Indiana can benefit from that progress if it truly breaks down silos within government agencies and partners, and lets innovation, based on evidence-based practices, take place.

Remember to Vote
Indiana residents can vote for the candidates of their choice either on Election Day or through early and absentee voting. Indianans had until Oct. 11, 2016, to register to vote for the general election. Registered Indianans who expect to be prevented from going to their polling place on Election Day may vote early through absentee ballots beginning Oct. 12 through Nov. 7. Applications for absentee ballots must be received by Oct. 31 in order to be eligible. More information regarding absentee voting is available at: Absentee Voting.