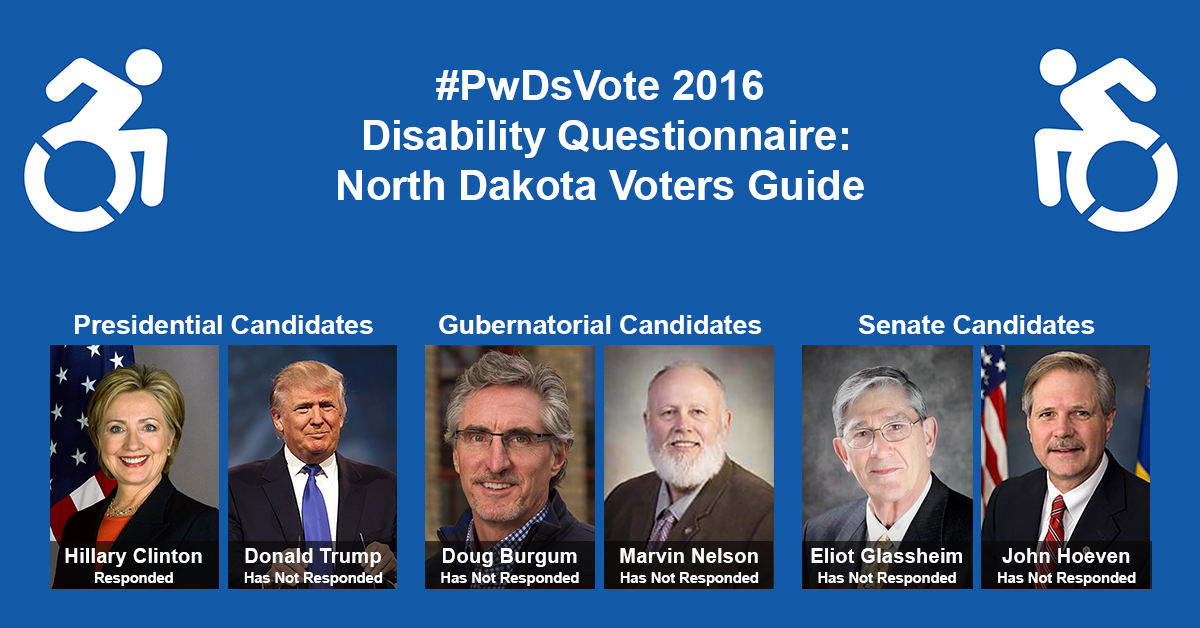 Washington, Oct. 13 – As voters get ready to head to the polls in North Dakota, RespectAbility is releasing is North Dakota Disability Voter guide for the upcoming gubernatorial, senate and presidential elections. Democrat Marvin Nelson and Republican Doug Burgum are seeking the governorship. Regarding the senate seat, Democrat Eliot Glassheim is challenging Republican incumbent John Hoeven. Unfortunately for the 75,202 North Dakotans with a disability, none of the candidates have completed the #PwDsVote Disability Campaign Questionnaire for Senate and Gubernatorial Candidates for people with disabilities. Both Hoeven and Burgum declined to complete the questionnaire. Glassheim has yet to respond but Nelson’s campaign has said they are planning to complete the questionnaire soon.

The #PwDsVote 2016 Campaign Questionnaires were designed by and for people with disabilities (PwDs) and those who love them to know where candidates stand on key  issues. RespectAbility is nonpartisan and does not endorse candidates. The questionnaires are purely for educational purposes as voters go to the polls.

RespectAbility, founded in 2013, is a nonpartisan, nonprofit organization working to end stigmas and advance opportunities for people with disabilities. It has submitted comments for all 50 state’s drafts of the Unified Plan as required under Section 102 of the Workforce Innovation and Opportunity Act (WIOA). The North Dakota WIOA draft is very well done. It creates a win-win-win strategy and system for vital improvements for North Dakota’s workforce system and its ability to serve people with barriers to work, employers and taxpayers alike. North Dakota already is leading the nation in terms of expanding competitive, integrated employment for people with disabilities. North Dakota has been blessed with the dedicated leadership of Gov. Dalrymple who has been focused on creating a positive business climate and committed to tapping into the talents offered by individual with disabilities. This climate can continue thanks to WIOA and the upcoming elections.

One of the most important facets of WIOA is that it raises expectations for youth with disabilities and assists states to provide them with the supports they need to ensure success. Indeed, as North Dakota’s Baby Boomers retire and the state’s economy evolves, employers are starting to experience increasing talent shortage. North Dakotans with disabilities are an untapped resource that can be trained to bridge that gap. Indeed, a recent detailed study by the Kessler Foundation and the University of New Hampshire shows the 70 percent of working age people with disabilities are striving for work.

Evidence shows that people with disabilities can provide a wonderful solution to companies and other employers that want to succeed. The diverse skills, greater loyalty and higher retention rates of people with disabilities are already starting to meet employer talent needs in increasing numbers around America. With WIOA, North Dakota can benefit from that progress if it truly breaks down silos within government agencies and partners, and lets innovation, based on evidence-based practices, take place.

Remember to Vote
North Dakota bears the unique distinction that it does not require voters to register prior to Election Day. Bring acceptable proof of ID and residency to the polls in order to vote. If you are unable to make it to the polls on Election Day, any North Dakota resident can apply for an absentee ballot and vote by mail. Absentee ballot deadlines vary by county. More information regarding absentee ballots can be found at: Voting by Absentee or Mail Ballot.