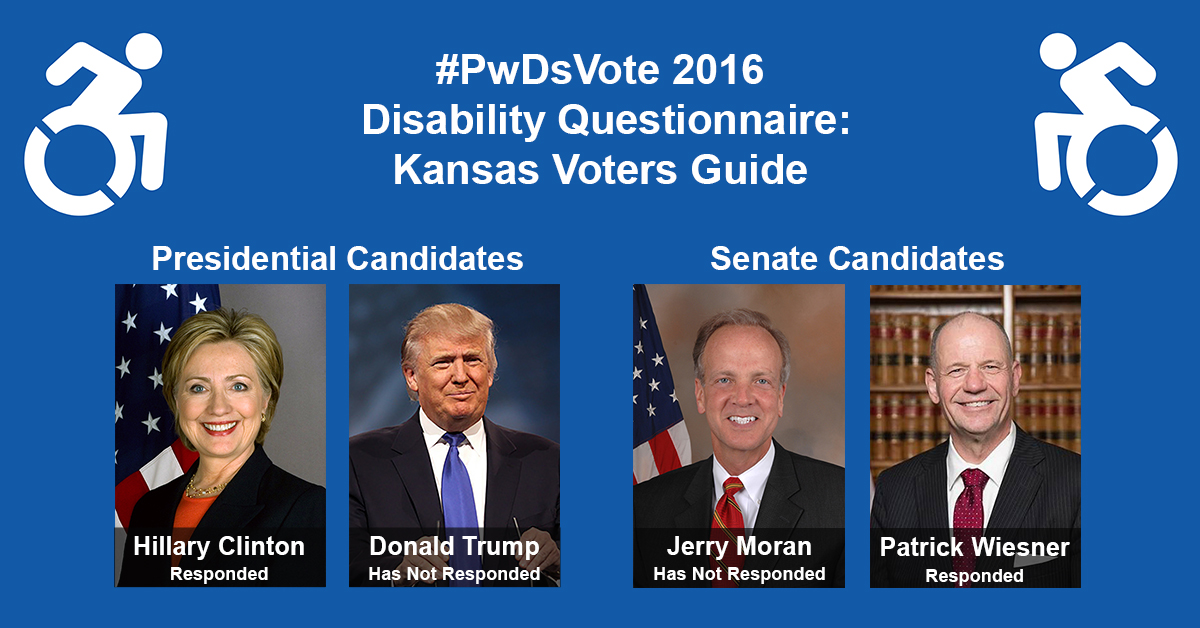 Washington, Oct. 14 – As voters get ready to head to the polls in Kansas, RespectAbility has released its Kansas Disability Voter Guide for the upcoming senate and presidential races. Democrat Patrick Wiesner, who is challenging incumbent Republican Sen. Jerry Moran, as well as presidential candidate Hillary Clinton, has completed the #PwDsVote Disability Campaign Questionnaire for people with disabilities. Moran has not yet responded to the questionnaire.

Twenty-three additional candidates for Senate, as well as nine candidates for governor, from both sides of the aisle (20 Democrats, 13 Republicans) have responded so far, showing that disability rights is a nonpartisan issue. The responses also are geographically-diverse, coming from states all around the country, as politicians are paying more and more attention to the disability community.

Kansas’ 366,393 citizens with disabilities now have a chance to read Wiesner’s responses and understand where he lies on certain issues. RespectAbility is still awaiting responses from Jerry Moran and will publish them verbatim if and when they are received.

In his response, Wiesner, whose sister had spina bifida and passed away when she was 14 years old, spoke about how the current economy is not beneficial toward people with disabilities.

“I support affirmation action for those with disabilities in government contracting and employment. Our economy is not set up for people with disabilities,” he responded. “My goal is full employment for the disabled who want a job. I believe education is the way forward. My plan will be based on evidence provided by experts in the field.”

RespectAbility President Jennifer Laszlo Mizrahi said, “It is vital for us to know where the candidates stand on the disability aspects of economic, stigma, education, safety, transportation, housing, healthcare, foreign affairs, criminal justice and other issues. Candidates have hugely different ideas about how to deal with the issues. Thus, it’s extremely important to read their full answers so you can understand their vast differences. We also are disappointed that Mr. Trump and Sen. Moran have yet to complete the questionnaire and hope they will do so soon. We will send out any updates that arrive.”

Kansas Looking to Increase Disability Employment
There are 192,334 Kansans with disabilities who are between the ages of 18-64. Additionally, there are 11,300 Kansans ages 16-20 with disabilities. More than 56,000 Kansas students have individual education plans (IEPs). However, some Kansas children with disabilities may not yet have received a disability diagnosis they need, and thus are not yet receiving the school accommodations and supports that they need to succeed. This can lead to a lifetime of poverty or flowing down the school to prison pipeline.

Kansas is in the top 20 states when it comes to the employment of people with disabilities. There are over 192,000 people with disabilities between the ages of 18 to 64 in Kansas and 39.8 percent of them are employed. While this makes Kansas number fifteen amongst states, there is still a 39.9-point gap when you consider the 79.7 percent of people without disabilities in Kansas who are working. Additionally, each year a quarter of the youth ages 16-20 in Kansas will age out of school and because of your state’s hard work, they have increasing chances to find success in the working world.

RespectAbility, founded in 2013, is a nonpartisan, nonprofit organization working to end stigmas and advance opportunities for people with disabilities. It has submitted comments for all 50 state’s drafts of the Unified Plan as required under Section 102 of WIOA. Kansas’s commitment to people with disabilities is evident throughout the written state plan. Because of WIOA, Kansas has the chance to institutionalize and expand on the many best practices you have already propelled in gaining high rates in terms of employment outcomes for people with disabilities. This draft plan will capitalize on the partnerships and collaborations necessary to empower youth transitioning from school to work.

One of the most important facets of WIOA is that it raises expectations for youth with disabilities and assists states to provide them with the supports they need to ensure success. Indeed, as Kansas’s Baby Boomers retire and the state’s economy evolves, employers are starting to experience increasing talent shortage. Kansans with disabilities are an untapped resource that can be trained to bridge that gap. Indeed, a recent detailed study by the Kessler Foundation and the University of New Hampshire shows the 70 percent of working age people with disabilities are striving for work.

Evidence shows that people with disabilities can provide a wonderful solution to companies and other employers that want to succeed. The diverse skills, greater loyalty and higher retention rates of people with disabilities are already starting to meet employer talent needs in increasing numbers around America. With WIOA, Kansas can benefit from that progress if it truly breaks down silos within government agencies and partners, and lets innovation, based on evidence-based practices, take place.

Remember to Vote
Kansas residents can vote for the candidates of their choice either on the standard voting schedule or through advance voting. Kansans have until Oct. 18, 2016 to register to vote in the general election. Register to vote online at: Online Voter Registration Application. More information regarding voting can be found at: Registration and Voting. If unable to partake in standard voting, any registered Kansas voter can submit their vote through advance voting. To vote in advance, a voter must request an advance voting application and return it to the county election officer. The County Election Officer will send a paper absentee ballot to the voter. The voter then completes the ballot and returns it to the County Election Official either by mail or in person by Election Day. More information regarding advance voting can be found at: Advance Voting.