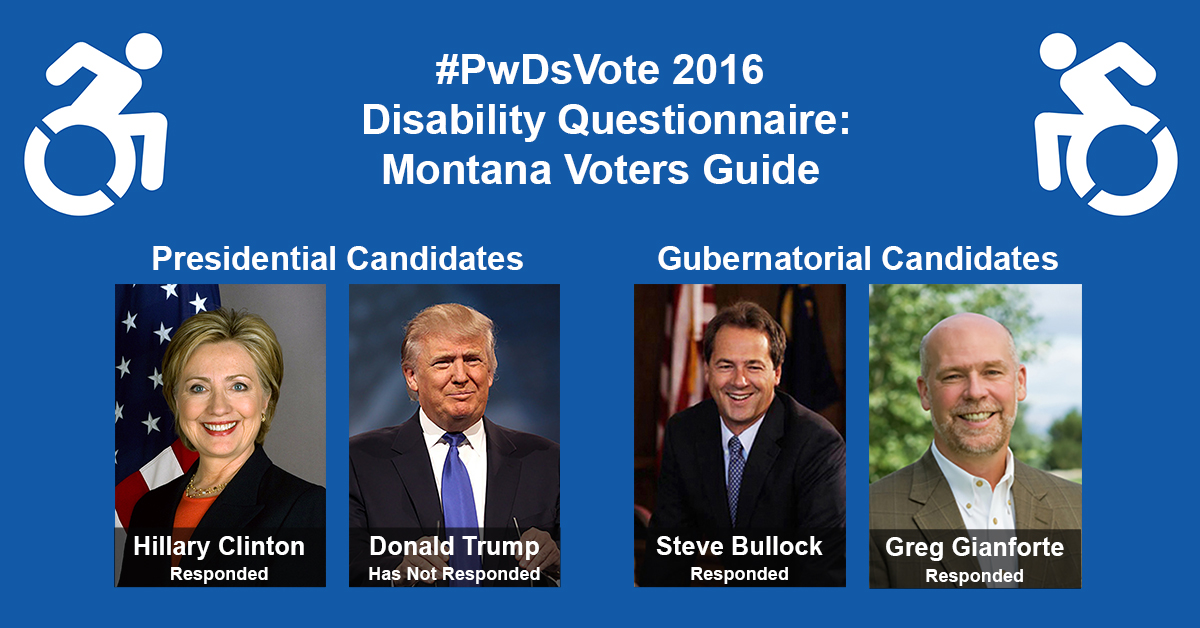 Published by Lauren Appelbaum on October 17, 2016

Washington, Oct. 17 – As voters get ready to head to the polls in Montana, RespectAbility is releasing its Montana Disability Voter Guide for the upcoming senate and presidential races. Both Republican Greg Gianforte and incumbent Democrat Gov. Steve Bullock, as well as presidential candidate Hillary Clinton, completed the #PwDsVote Disability Campaign Questionnaire for people with disabilities and have very different solutions to pressing problems. By both Senate candidates filling out the questionnaire, each of them communicates that disability issues matter to them.

Eleven candidates for governor, as well as 26 candidates for Senate, from both sides of the aisle (22 Democrats, 14 Republicans, 1 Green Party) have responded so far, showing that disability rights is a nonpartisan issue. An additional nine candidates responded that they are not completing any questionnaires during this campaign season. The responses also are geographically-diverse, coming from states all around the country, as politicians are paying more and more attention to the disability community.

By both candidates responding to the questionnaire, they have enabled the 69,927 Montanans with disabilities who are between the ages of 18-64 a chance to get to know their views on a variety of disability-related issues.

Neither candidate answered each question individually, but they both sent letters addressing several of the issues brought up in the questionnaire. Bullock addressed employment, independent community living, veterans with disabilities, education, healthcare, caregivers support and workforce development issues while Gianforte focused on employment and education.

“The Montana Department of Public Health and Human Services works hard to empower all Montanans with disabilities to prepare, obtain, and retain work in high-quality and high-demand careers,” Bullock responded. “This work includes actively engaging in the states Workforce Innovation and Opportunity Act (WIOA) to reimagine the state’s vocational rehabilitation, independent living, and disability services to better serve Montanans with disability in living the lives they choose and deserve.”

“I believe that the goal in education should be to help every child reach their full potential,” Gianforte said. “For students with disabilities, they need to be taught valuable skills just like anyone else. This is the great thing about technology, and why one of my primary goals is to get computer science into every high school.”

RespectAbility President Jennifer Laszlo Mizrahi said, “Montana’s voters with disabilities are looking for jobs so they can achieve the American dream, just like anyone else. It is vital for them to know where the candidates stand on the disability aspects of economic, stigma, education, healthcare, criminal justice and other issues. Many candidates have hugely different ideas about how to deal with the issues. Thus, it’s extremely important to read their full answers so you can understand their vast differences.”

Montana Needs to Improve Outcomes for Citizens With Disabilities
There are 69,927 Montanans with disabilities who are between the ages of 18-64. Additionally, there are 3,700 Montanans ages 16-20 with disabilities. More than 14,000 Montana students have individual education plans (IEPs). However, many Montanan children with disabilities have not yet received a disability diagnosis they may need, and thus are not yet receiving the school accommodations and supports that they need to complete high school and succeed. They can find themselves trapped into a lifetime of poverty or flowing down the school to prison pipeline.

Today Montana has the opportunity to work hard to improve outcomes and be a leading example to other states in terms of competitive, integrated employment for people with disabilities. Currently 40.5 percent of working-age Montanans with disabilities are employed compared to 77.8 percent of those without disabilities. View the rankings of all 50 states and compare.

Montana Has an Opportunity to be an Innovator
RespectAbility, founded in 2013, is a nonpartisan, nonprofit organization working to end stigmas and advance opportunities for people with disabilities. It has submitted comments for all 50 state’s drafts of the Unified Plan as required under Section 102 of WIOA. RespectAbility offered public comments around Montana’s state plan so that employment outcomes can improve. There are almost 69,000 working-age people with disabilities in Montana and nearly 60 percent of them are outside of the workforce. Many of those who are working are only working part time and/or are under-employed.

One of the most important facets of WIOA is that it raises expectations for youth with disabilities and assists states to provide them with the supports they need to ensure success. Indeed, as Montana’s Baby Boomers retire and your state’s economy evolves, employers are starting to experience increasing talent shortage. Montanans with disabilities are an untapped resource that can be trained to bridge that gap. Indeed, a recent detailed study by the Kessler Foundation and the University of New Hampshire shows the 70 percent of working age people with disabilities are striving for work.

Evidence shows that people with disabilities can provide a wonderful solution to companies and other employers that want to succeed. The diverse skills, greater loyalty and higher retention rates of people with disabilities are already starting to meet employer talent needs in increasing numbers around America. With WIOA, Montana can benefit from that progress if it truly breaks down silos within government agencies and partners, and lets innovation, based on evidence-based practices, take place.