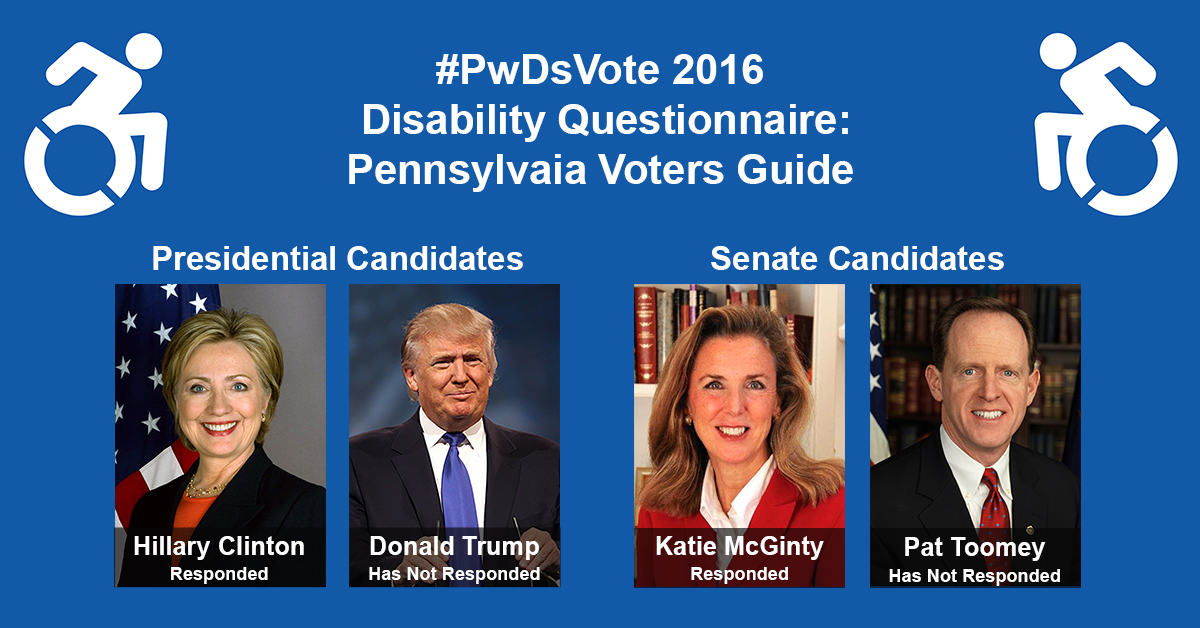 Published by Charles Butler on October 17, 2016

Washington, Oct. 17 – As voters get ready to head to the polls in Pennsylvania, RespectAbility has released its Pennsylvania Disability Voter Guide for the upcoming senate and presidential races. Democrat Katie McGinty, who is challenging incumbent Republican Sen. Pat Toomey, as well as presidential candidate Hillary Clinton, has completed the #PwDsVote Disability Campaign Questionnaire for people with disabilities. Toomey has not yet responded to the questionnaire.

Twenty-six candidates for Senate, as well as eleven candidates for governor, from both sides of the aisle (22 Democrats, 14 Republicans, 1 Green Party) have responded with answers to the questionnaire so far, showing that disability rights is a nonpartisan issue. An additional nine candidates responded that they are not completing any questionnaires during this campaign season. The responses also are geographically-diverse, coming from states all around the country, as politicians are paying more and more attention to the disability community.

Pennsylvania’s 1,733,512 citizens with disabilities now have a chance to read McGinty’s responses and understand where she lies on certain issues. RespectAbility is still awaiting responses from Sen. Pat Toomey and will publish them verbatim if and when they are received.

In her response, McGinty spoke about how people with disabilities deserve the same rights as other Americans without disabilities.

“Every American should have equal rights and the ability to live freely without stigma – regardless of sex, race, disability or any other factor,” she stated. “People with disabilities are the same as every other all Americans – looking for a fair shot at success.”

RespectAbility President Jennifer Laszlo Mizrahi said, “It is vital for us to know where the candidates stand on the disability aspects of economic, stigma, education, safety, transportation, housing, healthcare, foreign affairs, criminal justice and other issues. Candidates have hugely different ideas about how to deal with the issues. Thus, it’s extremely important to read their full answers so you can understand their vast differences. We also are disappointed that Mr. Trump and Sen. Toomey have yet to complete the questionnaire and hope they will do so soon. We will send out any updates that arrive.”

One of the most important facets of WIOA is that it raises expectations for youth with disabilities and assists states to provide them with the supports they need to ensure success. Indeed, as Pennsylvania’s Baby Boomers retire and the state’s economy evolves, employers are starting to experience increasing talent shortage. Pennsylvanians with disabilities are an untapped resource that can be trained to bridge that gap. Indeed, a recent detailed study by the Kessler Foundation and the University of New Hampshire shows the 70 percent of working age people with disabilities are striving for work.

Evidence shows that people with disabilities can provide a wonderful solution to companies and other employers that want to succeed. The diverse skills, greater loyalty and higher retention rates of people with disabilities are already starting to meet employer talent needs in increasing numbers around America. With WIOA, Pennsylvania can benefit from that progress if it truly breaks down silos within government agencies and partners, and lets innovation, based on evidence-based practices, take place.