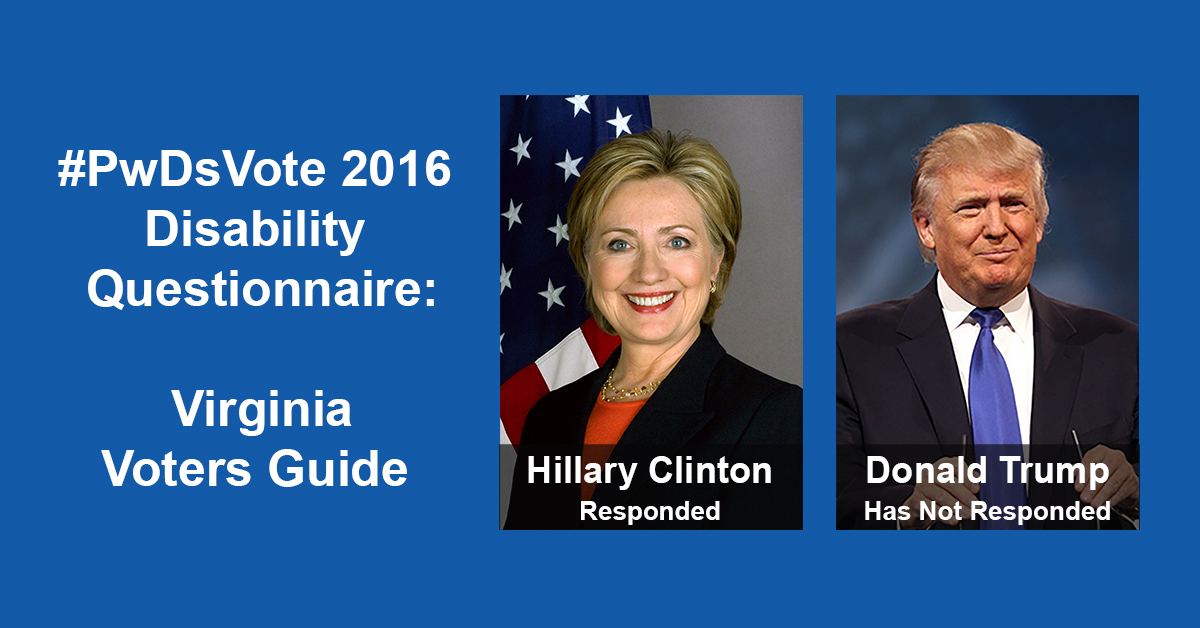 Washington, Oct. 19 – As voters get ready to head to the polls in Virginia, RespectAbility is releasing its Virginia’s Disability Voter Guide for the upcoming presidential election. Democrat Hillary Clinton has completed the #PwDsVote Disability Campaign Questionnaire, but Republican Donald Trump has yet to do so.

From the review of Virginia’s Unified State Plan, it is clear that Virginia takes employment for people with disabilities seriously, including them in almost every section of its Plan. Virginia’s emphasis on collaboration and cooperation among agencies, focus on relevant data, and desire to improve and self-evaluate are all encouraging signs.

Remember to Vote
Virginia residents can vote for the candidates of their choice either through the standard voting schedule, early voting, or absentee ballots. Voters had until Oct. 17, 2016 to register to vote. More information regarding voter registration can be found at: Voter Registration.

Virginia also has early voting in the sense of having certain polling places open on designated days prior to Election Day as well as absentee voting both my mail and in person. To vote by mail, a registered voter must meet these certain requirements in order to be qualified. In order for the ballot to count, it must be received by Nov. 1. More information regarding absentee ballots can be found at: Requesting An Absentee Ballot.

On the other hand, to vote during the early voting period, the person may vote purely for the sake of convenience. To vote early, a person must appear in person at either the county election commission office or at a satellite voting location opened by the county election commission. Virginians can vote early from Oct. 29 to Nov. 5. More information regarding early voting can be found at: Early Voting.