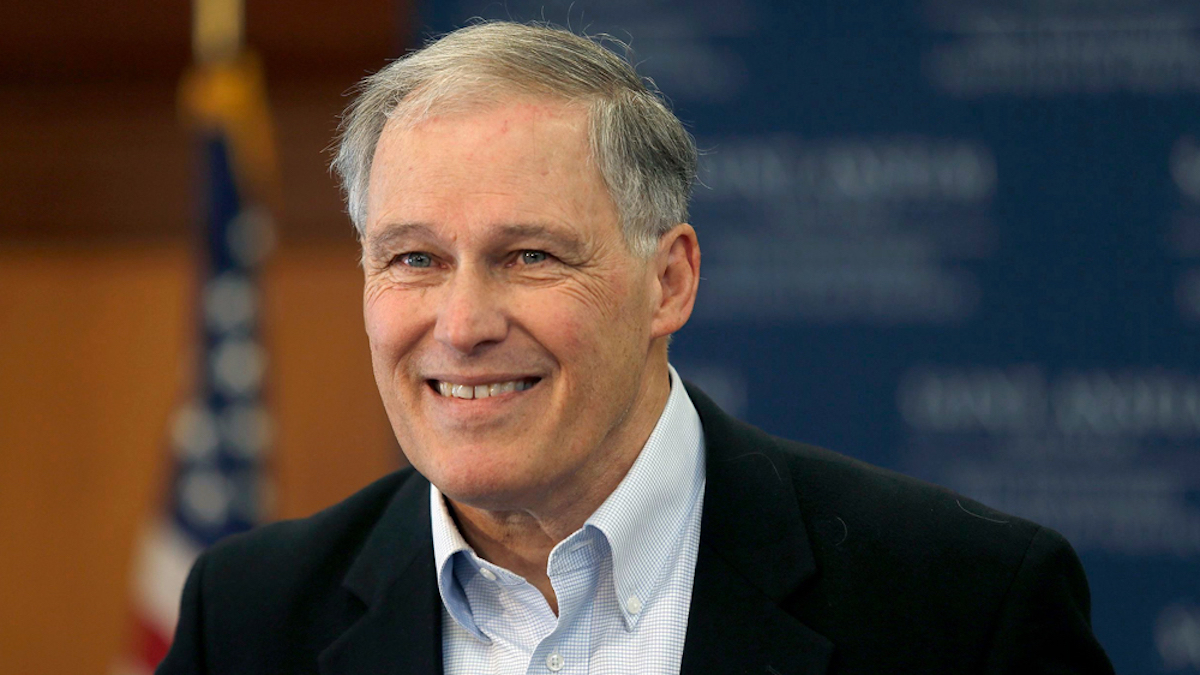 Washington, D.C., March 1 – Washington Gov. Jay Inslee entered the crowded 2020 presidential race Friday, becoming the first sitting governor to do so. While he is making climate change a leading issue for his presidential bid, he has made disability employment a priority during his governorship.

Gov. Inslee announced his presidential candidacy by releasing a video on Facebook and making a speech over Facebook Live and a general news broadcast. His announcement video had accurate open captioning and even depicted a person with a visible disability — a child with asthma using an inhaler. His announcement speech on Facebook Live, however, did not include any captions or an ASL interpreter. However, the media that broadcast his speech did offer accurate closed captioning. Gov. Inslee mentioned communities of color, the Muslim community and others in need of change but failed to mention the disability community. And while he listed many of his accomplishments as Governor of Washington, unfortunately he failed to mention the many he has made for Washingtonians with disabilities.

While he did not mention them in his announcement speech, there have been a wide variety of initiatives at the state and local level to empower people with disabilities into the workforce under Gov. Inslee’s leadership. He has instituted a variety of different policies from promoting state government as a model employer for Washington residents with disabilities to supporting the work of various disability focused state agencies. Locally, the Seattle City Council specifically has outlawed the practice of paying sub-minimum wages to locals with disabilities while elsewhere in the state a SAMSHA Mental Health program supports jobs for people with severe mental health disabilities.

Washington State also is home to other innovative programs for people with disabilities. Project SEARCH is a one-year, school-to-work program that takes place entirely at the workplace. This innovative, business-led model features total workplace immersion, which facilitates a seamless combination of classroom instruction, career exploration, and worksite-based training and support. The goal for each program participant is competitive, integrated employment. SEARCH sites are scattered throughout the state at various employer partners that include Morningside Services, Provail, Microsoft, Starbucks and Alaska Airlines.  In Washington State, the SEARCH model is being expanded into new, cutting edge territory. The State Division of Vocational Rehabilitation, the University of Washington, Seattle Public Schools and PROVAIL are specifically working on expanding the model to have an even bigger impact on neurodiverse youth living on the Autism spectrum.

In total, there are 480,828 working-age Washingtonians with disabilities. That total includes people who are blind or deaf or have other visible conditions such as spinal cord injuries, as well as people with invisible disabilities including learning disabilities, mental health or Autism.

Of that number, 194,948 of them have jobs. That means the Evergreen State has a disability employment rate of 40.5 percent, up from 39.2 percent last year. 1,156 people with disabilities gained new jobs in Washington State’s workforce in 2017. According to RespectAbility, a national organization that fights stigma and advances opportunity for people with disabilities, Washington State now ranks 20th in the nation.

In October 2018, Gov. Inslee declared the month to be Disability Employment Awareness Month in Washington State.

“Workplaces that welcome the talents of all people, including people with disabilities, are a critical part of our efforts to build an inclusive community and strong economy,” he said in a statement.

Additional Protections for Individuals with Disabilities and Their Families

Gov. Inslee proclaimed November 2017 as Family Caregiver Month to recognize “unpaid family and kinship caregivers for providing countless hours of assistance to loved ones, friends, and neighbors with chronic illness, disabilities, or other special needs.” He recognized that there were approximately 830,000 family caregivers in Washington State, who provide nearly 770,000,000 hours and $11 billion annually in unpaid services. The state of Washington added several new Medicaid programs to expand services and support for these caretakers.

Recognizing that not all caregivers provide adequate care, Gov. Inslee signed ‘Laura’s Act’ into law in 2016 to protect adults with developmental disabilities. Laura was a 48-year-old woman with severe developmental disabilities, whose sole caregiver neglected and abused his aunt. He “repeatedly burned her with a meth pipe. He kept her in a filthy back bedroom, with a lock only accessible from the outside. She was neglected to the point that many of her teeth had rotted out.” Laura’s case manager, who visited yearly, did not catch any red flags about her deteriorating condition. The new bill will require case managers to visit three times a year, including one unannounced visit.

Twenty-five percent of American adults have a disability, and more than half of all Americans have a loved one with a disability. It is, thus, critical that candidates appeal and cater to the disability community at every stage of their campaign. Gov. Inslee failed to mention people with disabilities in his announcement speech. Even though his campaign appears to be focused on climate change, it is important the people with disabilities are included when listing different communities in need of change. The disability community is impacted greatly by every major issue presidential candidate discusses. Gov. Inslee has a national stage to promote the successes of individuals with disabilities in his state and the opportunity to send a strong message to Americans with disabilities that he cares about their future as well.