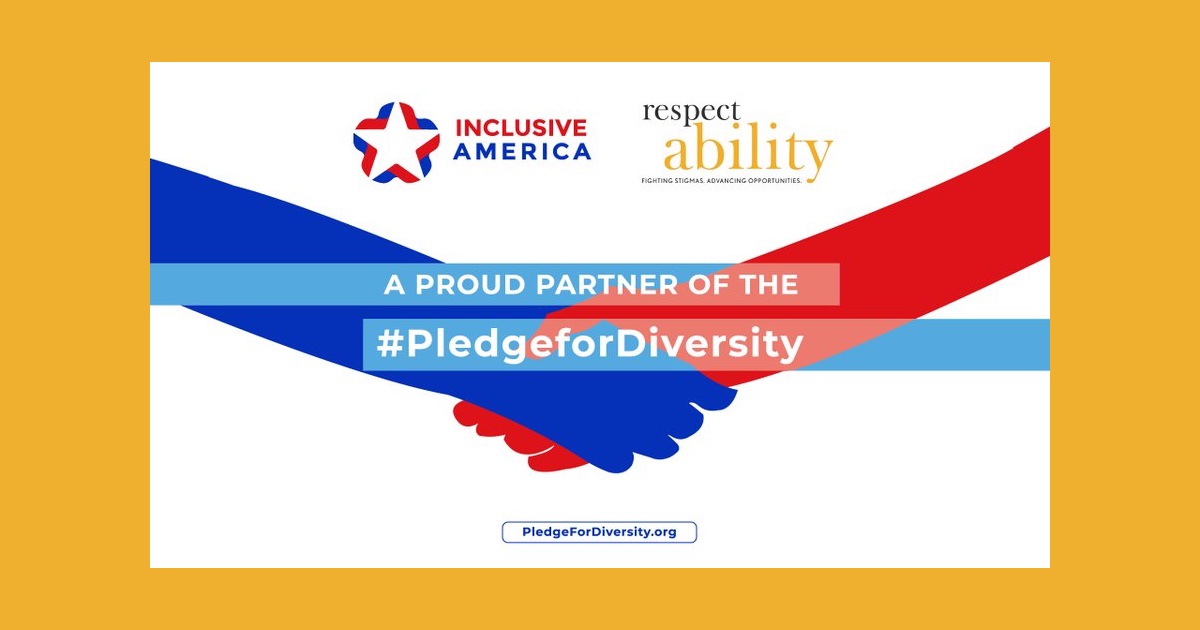 RespectAbility and Inclusive America Urge Candidates to take the #PledgeForDiversity

“Personnel is policy” in a collaborative effort to make government reflect America’s diversity.

Washington, D.C., August 14 – With 80 days until the November 2020 election, Inclusive America, a non-profit organization dedicated to inclusion in government leadership, is leading a collaborative effort to push our nation’s leaders to reflect the rich diversity of the communities they serve. The national disability inclusion organization RespectAbility is partnering with Inclusive America to urge candidates to take the “Pledge for Diversity, Equity, and Inclusion.”

The Pledge is built around four critical goals, including the selection of a national Chief Diversity, Equity, and Inclusion Officer, greater transparency on civil servants and political appointees, adoption of new inclusion rules to improve federal hiring practices, as well as enforcing anti-discrimination policies throughout the federal workforce.

“We are so excited to partner with Inclusive America to urge political candidates to take the #PledgeForDiversity,” said RespectAbility President and CEO Jennifer Laszlo Mizrahi. “RespectAbility knows that problems are best solved by working with people who have experienced them firsthand and know solutions that work. That is why we want to see more people with disabilities, more people of color, more women and more members of the LGBTQIA community taking an active, leading role at the highest level of political power.”

As an organization, Inclusive America is dedicated to tracking demographic data on political appointees, partnering organizations to recruit diverse candidates for a range of political positions and advancing public policies to diversity, equity and inclusion in public sector employment.

The data collected by Inclusive America paints a damning portrait of a federal government that fundamentally fails to reflect the full spectrum of diversity in America today. For example, only 6 out of 93 United States Attorneys are People of Color and 0 women have served as Ambassador to several key United States allies, such as Israel, Spain and Germany. In 2018, 93 percent of federal government leaders were men and 80 percent were white men, specifically.

The federal government is woefully lacking in senior leadership drawn from the ranks of the nation’s largest minority community. While one-in-five Americans – 61 million people – have a disability, according to the data, less than 1% of Senior-Executive Positions are held by people with disabilities. People with disabilities are America’s largest minority group and the only one that, due to an accident or illness, anyone can join at any time.

Inclusive America maintains a comprehensive data portal that captures 23 years of data on political appointees across the federal government. This portal is freely accessible to members of the public and the press. More details can be found here: https://inclusiveamerica.org/comprehensive-data-portal/

People can get involved with the #PledgeForDiversity effort by going to Inclusive America’s website and using their digital platform for urging candidates to take the pledge. That website can found at https://pledgefordiversity.org/.

To find and engage with specific candidates via social media, please visit the Pledge’s Candidate database at https://pledgefordiversity.org/candidates/