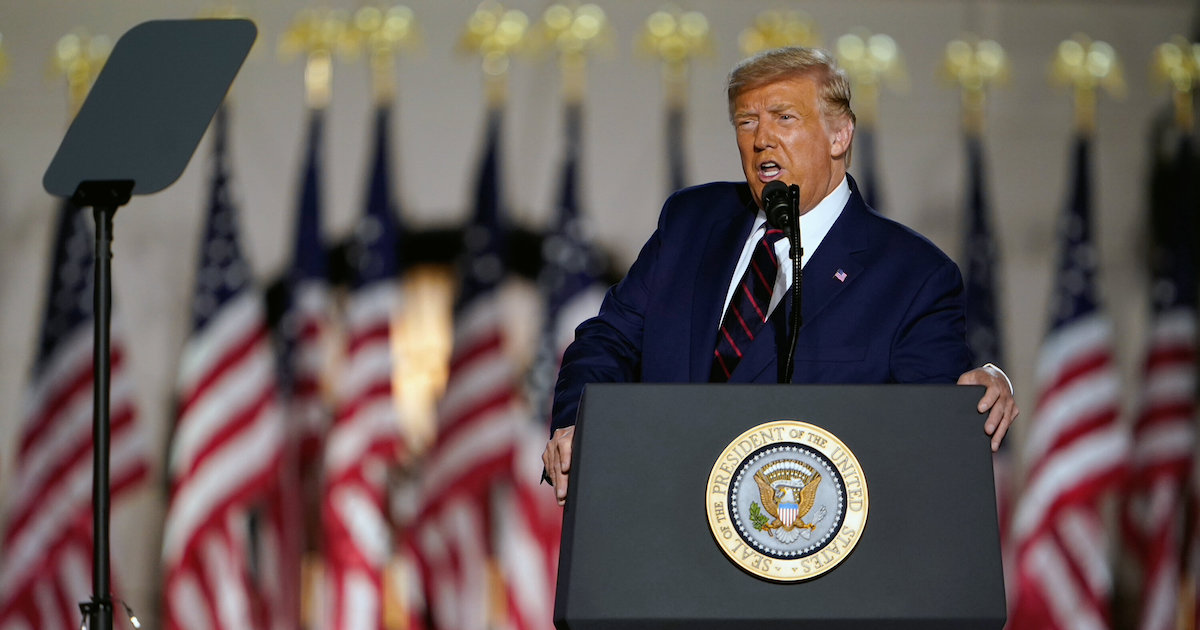 Washington, D.C., August 28 – The 2020 Republican National Convention, which took place over the course of this week as a mixture of live and prerecorded events, gave prominent focus to people with disabilities in prime time speaking slots.  By doing so, as with the previous week’s Democratic National Convention, the event helped to normalize disability, showing individuals with a variety of disabilities speaking about topics ranging from the oppressive behavior of China, to the challenges of being a mother of a child with Down syndrome–issues of importance to all people in America.  As with the emphasis at the DNC, this is a massive change in politics as people with disabilities are starting to be seen and heard.

Before the convention even began, First Lady Melania Trump unveiled the newly renovated White House Rose Garden, which was to be the site of her address to the convention.  She highlighted the most striking visual change, the addition of a 3-foot-wide limestone walking path bordering the central lawn, making the garden fully accessible for people with disabilities for the first time.

Disabilities were given a prime focus on the third night of the convention, Wednesday, August 26th, whose theme was “America, Land of Heroes.”  The evening was kicked off by Congressman Dan Crenshaw (R-TX), whose right eye was destroyed during a mission in Afghanistan in 2012. He spoke about heroism and praised American freedom, saying, “We are a people with a common set of ideals conceived in liberty.  A people that has sacrificed time and time again for our freedom, and the freedom of others.  That’s something no other country–ever, anywhere–can claim.”

Crenshaw was soon followed by Ohio resident Tera Meyers, who spoke about school choice, and the special needs scholarship legislation she championed on behalf of her son who has Down Syndrome.  She movingly recounted how doctors warned her, prior to the birth of her son Samuel, that with Down Syndrome, her son’s life “wouldn’t be worth living.”  Disregarding their advice, she struggled to find educational opportunities suitable for his educational needs and fought to help pass legislation for special needs scholarships so that “all students could choose the right program for their needs.”

Meyers described Samuel’s recent visit to the White House to meet the president, whom he told:  “School choice helped my dreams come true.  My school taught me the way I learn best, and I was able to fit in.”  Meyers added that the president “gave Samuel an equal seat at the table,” and lauded the Trump administration’s ongoing commitment to fight for special needs programs to ensure that every child in America has “an equal opportunity in life.”

Wednesday evening also featured a talk by Madison Cawthorn, a 25 year old congressional candidate from North Carolina, who is a wheelchair user.  Cawthorn, who, if elected, would be the youngest member of Congress in over 200 years, was paralyzed from the waist down in a “horrific car accident,” six years ago.  He said that after the crash, he had “thought about giving up…before my accident I was 6’4″.   I stood out in a crowd,” but in his wheelchair he “felt invisible,” adding that:  “I knew I could still make a difference.  My accident gave me new eyes to see and new ears to hear.” He concluded his address to the national audience by, with the help of two aides, getting up from his wheelchair and standing while reciting the closing words of the Pledge of Allegiance.

Though he never mentioned his blindness, Chinese dissident, Chen Guangcheng, known for his harrowing escape from house arrest in 2012, also addressed the conclave on Wednesday. He read from a speech typed in braille, and spoke in English, his second language.  He pledged his “eternal gratitude” to the American people for welcoming him and his family to the United States “where we are now free.”

People with disabilities were highlighted in many other ways, especially through their prominence in videos interspersed throughout the event. In addition, when Vice-President Mike Pence delivered the address accepting his nomination, at Ft. McHenry, in Maryland, to conclude “America–Land of Heroes,” prominent in the front of the audience was a group of disabled veterans.  The former soldiers used special equipment, provided by the Stand Up and Play Foundation, to rise from their wheelchairs to join the audience in standing for the singing of “The Star Spangled Banner,” at the very location that had inspired its composition, and, at the conclusion of his speech, the Vice-President and his wife were shown personally greeting the veterans.

“With one in five people in America (one-in-four adults) having a disability, it is important that candidates and political parties fully and intentionally include people with disabilities,” said RespectAbility’s Vice President of Communications Lauren Appelbaum, who previously worked as a political researcher for NBC News. “Voters with disabilities want access in democracy, just like anyone else. At the same time, they have specific issues of interest. For example, of the 22 million working age (18-64) people with disabilities in our country, fully 70 percent of them were outside of the labor force pre-COVID-19 pandemic.”

“The disability community is making major progress, but we still have a long way to go,” said Jennifer Laszlo Mizrahi, president of RespectAbility. “All candidates and campaigns need to be accessible, inclusive and address disability issues. We urge all voters to ask their candidates to answer the Disability Candidate Questionnaire and take a stand on issues that matter.”