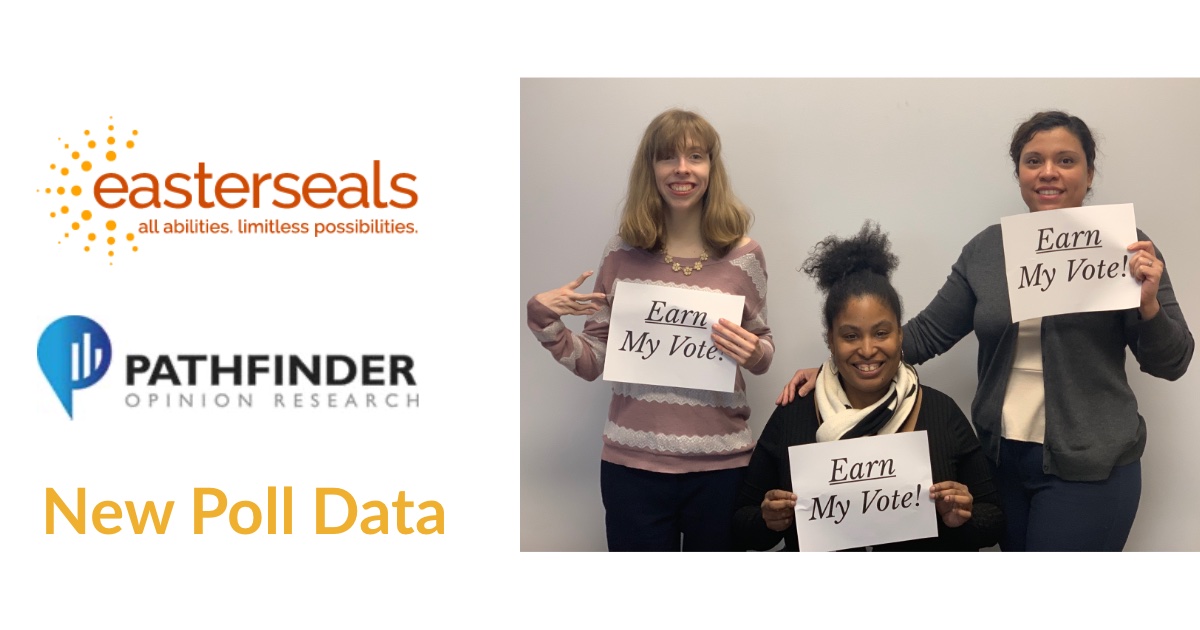 Easterseals Survey: 30+ Million Voters with Disabilities Participating in the 2020 Election

Rockville, Maryland, Oct. 30 – A new survey from Easterseals and Pathfinder Opinion Research conducted between October 20 and October 25 has found that, despite fear of exposure to COVID-19, voters with disabilities are highly engaged in the 2020 election. Eighty-nine percent of respondents to the survey were registered to vote. Of that, 47 percent already have voted, and 49 percent more say they definitely or probably will vote. More than half of respondents were “extremely enthusiastic” about voting, and 65 percent were more enthusiastic about voting in this election than prior elections.

According to an Easterseals’ press release on the survey, “Health care and COVID-19 are, by far, the two top issues driving voters with disabilities to the polls. All other issues, such as crime, public safety, immigration, employment, the environment and the Supreme Court, rank far lower in importance.”

Voters with disabilities on both sides of the pollical aisle strongly support protecting key components of the Affordable Care Act, including covering people with pre-existing conditions, allowing kids to stay on their parents’ plan until they are 26 years old, and expanding Medicare and Medicaid. Additionally, voters with disabilities support strengthening constitutional protections against discrimination on the basis of disability, sex, gender identity and sexual orientation.

The survey also found that two-thirds of respondents gave their current elected officials a negative performance rating when it comes to addressing the most pressing issues of the disability community.

“As we found in 2016, voters with disabilities in 2020 are highly engaged,” said Jennifer Laszlo Mizrahi, President of RespectAbility. “Now it is time for all of us to vote.”

Thus, 14 of the nation’s largest disability organizations, including RespectAbility, have joined together to urge all Americans who care about issues related to disability to vote on November 3rd. RespectAbility also has released 50 state nonpartisan voters guides, as well as issue-based guides – from education to immigration – containing key information on where candidates stand on issues impacting Americans with disabilities.

“This survey provides even more evidence that candidates for office who ignore the disability community do so to their detriment,” added former U.S. Representative and Dallas Mayor Steve Bartlett. Bartlett, who was one of the coauthors of the Americans With Disabilities Act of 1990, is the chairman of RespectAbility. “The vote of the disability community is not monolithic but attention to disability issues will gather votes for candidates.”