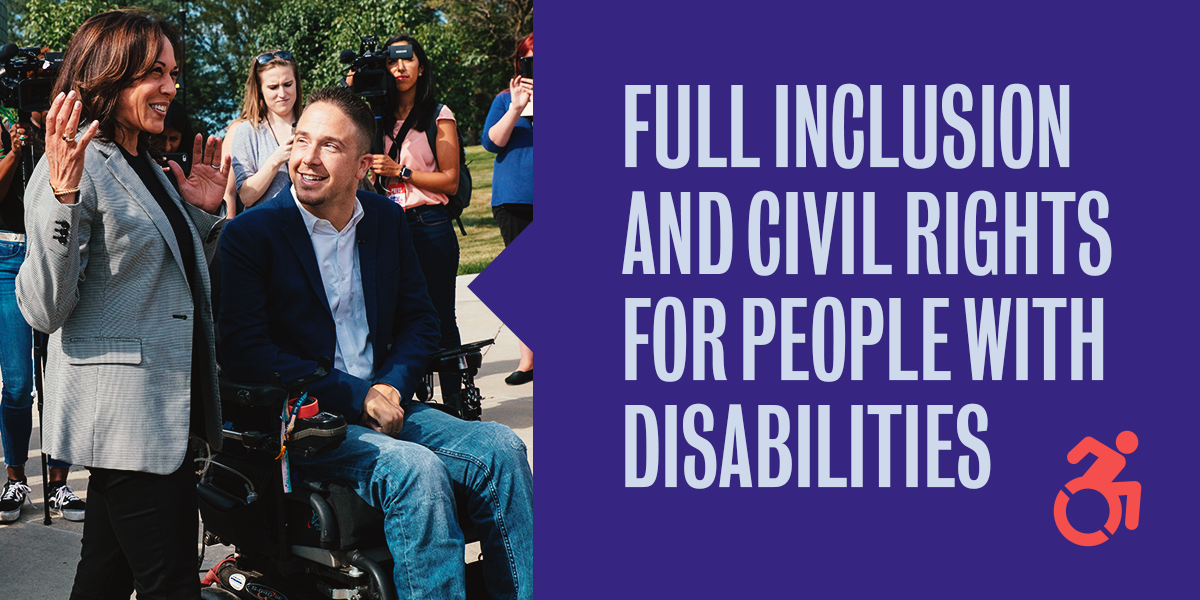 Sen. Harris also pledged to ratify U.S. participation in the United Nations’ Convention on the Rights of Persons with Disabilities and would ensure disaster planning includes protections for people with disabilities.

While there are some policies unique to individual with disabilities, including subminimum wage and living with the community, all policy plans – including those focused on education, employment, poverty, criminal justice reform and others – affect people with disabilities.

Her pledge to create new senior-level positions in the White House would ensure that the disability lens is applied for all policy decisions, especially domestic and economic initiatives.

The Harris campaign also released a video on Twitter featuring Alex Watters, a city councilmember in Sioux City, Iowa who uses a wheelchair. “I think sometimes there’s a perception of people with disabilities that they’re not going to be able to contribute,” Watters said. “I’m here to tell you that that’s wrong.”

“We need to change the perception,” he continued. “Being accessible is not enough. We need to make sure we’re being proactive. I don’t want to be limited by income guidelines or by access to care, or by anything else… It makes sense to invest in people with disabilities, helping them get off of services and back into competitive, integrated employment.”

This video includes open captioning, which is important not only for people who are deaf or hard of hearing but also for the general public, as 85 percent of people watch videos on social media on mute. However, this video, like all videos produced by the presidential candidates thus far, does not include audio description for people unable to see the images depicted in the video.

Harris Plan a Continuation of Outreach to Disability Community

This plan follows a blog post she wrote in commemoration of the 29th anniversary of the Americans With Disabilities Act (ADA) last month, “recommitting to build an America that is fully inclusive and accessible for everyone,” noting that there is still a lot of work to do 29 years later.

She called for ensuring all people with disabilities receive the minimum wage or higher; equal access to educational opportunities for children with disabilities; and “access to quality health care and community supports and services.”

Also in July, Harris unveiled her campaign’s Americans with Disabilities Leadership Council, which “will work closely with my team and me throughout this campaign to take on the issues that are most important to Americans with disabilities.”

Of the 20 candidates who were still in the race at the time, just 12 made any mention of the ADA anniversary on July 26. Yet, the topic of employment for people with disabilities – or any meaningful conversation of disability – did not occur at the second round of debates in Detroit that occurred just a few days later.

Importance of the Disability Vote

According to the U.S. Census Bureau, more than 56 million Americans live with some form of disability. This can include visible conditions such as spinal cord injuries, visual impairments or hearing loss to people living with invisible disabilities such as learning disabilities, mental health or Autism.

Two separate bipartisan polls following the last presidential election showed that voters with disabilities and their family and friends voted in big numbers for President Donald Trump. Fully three-quarters of likely voters either have a disability themselves or have a family member, or a close friend with disabilities. Therefore, it is in the best interest of every presidential candidate and the citizens of this country for candidates to recognize disability issues at this time.