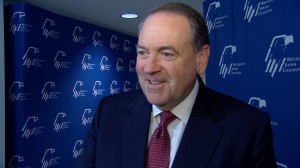 Washington, Dec. 12 – In an exclusive interview, former Arkansas Gov. Mike Huckabee stressed the need to employ people with disabilities, calling people who are blind, deaf and with physical disabilities his “best staff members.” The presidential hopeful also talked about inclusion in the educational setting in the interview with a coalition of disability groups including RespectAbility, Paralyzed Veterans of America and the National Association of Councils on Developmental Disabilities.

“People who may have a disability still have a lot of abilities,” Huckabee said. “And they should be employed. They should have the opportunity to use the skills that they have, often are extraordinarily useful and valuable.”

Read the full transcript of Gov. Mike Huckabee’s interview with The RespectAbility Report:

The RespectAbility Report: Good afternoon. Thank you for being with us today. I’m very curious, what do you see as, in your administration, how would you support more job opportunities for people with disabilities, including those with intellectual and developmental disabilities?

Gov. Mike Huckabee: I think sometimes we’ve put a lot of focus on the disability part. The fact is people who may have a disability still have a lot of abilities. And they should be employed. They should have the opportunity to use the skills that they have, often are extraordinarily useful and valuable. When I was governor, we had a number of people who had disabilities that were on my staff. People who were blind, people who were deaf, people who had other physical disabilities. They were some of our best staff members. They knew they had to work hard. They knew they had to prove themselves, and time and time again they did. And some of the most valued people in my administration were people who never let their disabilities keep them on the sidelines. They were right in the middle of the game and proved that the focus should be on what their abilities were, not just their disabilities.

The RespectAbility Report: In your White House, would you have a dedicated staff person to evaluating and working on disability issues?

Gov. Mike Huckabee: It’s always hard to say who you’re going to hire when you’re not even the president yet, but when I was governor, I certainly did have people on my staff and that’s what they did. They focused on making sure that we fully implemented the ADA (Americans with Disabilities Act). And when we did renovations to the governor’s mansion, we took some steps, some of which were expensive, but that was the people’s house and we made sure that nobody was not going to be able to access every part of the governor’s mansion, including if there was a future governor who was disabled. We made sure that every room in the governor’s mansion would be accessible. We try to do the same thing with the Capitol, with state buildings, because nobody who’s helping pay for these facilities should be unable to even access those facilities for something they had nothing to do with.

The RespectAbility Report: That’s very important, especially this year in the 25th Anniversary of the Americans with Disabilities Act. I’m curious, how do you get information about the needs and concerns of people with disabilities?

Gov. Mike Huckabee: In large measure from some of the advocacy groups. I mean it was always, during my tenure as governor, regular meetings with people from advocacy groups. Also from my own Department of Human Services, who oversaw the programs that were geared specifically toward the disabled. Since I’ve been out of office, I think, in large measure, it’s friends and relatives who themselves deal with disabilities. And it’s also through the people that I go to church with that I often see. One of my jobs at church is I drive the golf cart in the parking lot and, in part, that’s to help people with disabilities get from their cars to the front door.

The RespectAbility Report: Do you have any personal or family connections to disability?

The RespectAbility Report: Speaking of full inclusion, how do you feel we’re doing with our school systems and integrating students with disabilities, both at the elementary and secondary level, but also in college?

Gov. Mike Huckabee: The biggest challenge we’ve had is that the federal government has failed to live up to its end of the deal on the IDEA. Back when that originally was established, the federal government said it would take on a lion’s share of the costs. Well, the states have been caring it since the 1970s, and most states struggle with the funding issue. The federal government creates the mandate, but they don’t follow with the funding stream. And I know that there’s not a governor in America who hadn’t been frustrated by a very typical Washington ploy. They give us a mandate, they insist on what it is that we have to do, but they don’t provide the resources to make that happen.