Santorum: Use Presidential Bully Pulpit to Expand Job Opportunities for People with Disabilities 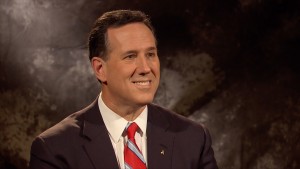 Washington, Dec. 12 – In an exclusive interview with a coalition of disability groups including RespectAbility, Paralyzed Veterans of America and the National Association of Councils on Developmental Disabilities, Sen. Rick Santorum defended his opposition to the Convention on the Rights of Persons with Disabilities U.N. treaty and talked about his daughter Bella, who has trisomy 18, as his inspiration for helping people with disabilities obtain jobs and live fully in society.

“Everybody has potential and that, we as a society, have to work to integrate people to make sure that there’s opportunities for people to rise in society,” Santorum said.

Read the full transcript of Sen. Rick Santorum’s interview with The RespectAbility Report:

The RespectAbility Report: Thank you very much for sitting down with us today, Senator.

Sen. Rick Santorum: My pleasure Randy, good to be with you.

The RespectAbility Report: What will you do to expand job opportunities for people with disabilities?

Sen. Rick Santorum: Well, you know, I think one of the things that, the most powerful thing the president has, is the power of the bully pulpit. In other words, to get in front of people and demonstrate you know what priorities are and what sort of things that America should be aware of. And, you know, I would say the president has used his bully pulpit very effectively, in particularly, probably the most important thing he focuses on is climate change. And he’s had, he hasn’t passed a single bill on climate change, but I think this country has moved decidedly because of his energy in that area.

You know, the issue of disability is a very personal one with me. Having a child with disabilities in the White House to me is probably as important a, a bully pulpit experience if you will, because we have a daughter who, in the eyes of the world, would be considered profoundly disabled and, to many, maybe even a burden. But, for us, she is the center of our family and a great joy and it’s all focused on the dignity of all human life and the idea that all life has value and we should take efforts to maximize everybody’s potential. And so that’s really the message.

And that’s whether you’re disabled, whether you’re someone who has, you know, graduated without a – left high school, left college without a degree, all of you, everybody has potential and that, we as a society, have to work to integrate people to make sure that there’s opportunities for people to rise in society.

And particularly look at, you know, obviously you think of children with disabilities, but we have a lot of folks who are coming back from the war who are profoundly and severely disabled and that’s a challenge for us as a society.

The RespectAbility Report: What issues for, that affect people with disabilities, have you worked on in the past? Specifically in the senate and in international treaties.

Sen. Rick Santorum: Well, I mean, obviously you know we worked with IDEA when I was in the United States Senate, worked with, you know, the other types of, the ADA other types of disability legislation.

But obviously you mentioned the treaty, the disabilities treaty, that was one I did get very active on. I wasn’t in the Senate at the time but became very active, and I know, to many of the disabilities community, it was a bit of a disappointment as to the position I took. But I took the position that the United States already leads in the area of disabilities laws. I mean there’s no country that has done more to promote the dignity of life within our laws and the treaty didn’t add to that, but what it did add was – it added an international component on top of it. And that’s very disconcerting to me. I don’t like – when we have good laws in the United States that are executed by the United States and that provide parents with the kind of authority that they need to have when it comes to caring for their child with a disability. I don’t want to substitute that for the government from an international body and the way I read that treaty, that’s what that treaty did. And so it wasn’t a harmless piece of legislation or treaty that was simply an encouragement for others to follow along with what the United States is doing by adopting this. The people have plenty of good examples for the United States how to pass disabilities laws, only to look at our laws. We don’t need to pass a treaty that inserts another layer, a higher layer of government into the relationship between parents and their children. I saw that in this bill, I know other didn’t but I did, and that’s why I didn’t support it. So to me I would make the argument I felt like I, I was fighting for, particularly disabled children, by opposing that bill.

The RespectAbility Report: In your administration, would you have a designated person as liaison to the disability community?

Sen. Rick Santorum: Well, obviously, my wife Karen – this is a huge issue for her. Obviously she is the caregiver to our daughter Isabella and she’s, you know very active, has been very, very active in that world. Our daughter has a disability called trisomy 18 and so, as a result of that, we’ve gotten very involved. We’ve spoken at conferences, we’ve probably talked to families who’ve encountered this, who have a child with trisomy 18, I wouldn’t say a new one every week but let’s say frequently. And so this is an area of deep commitment on her part and so I suspect you’ll see my wife as one of the issues that she’s very concerned about and will be very public about in working on these issues in all likely with the disabilities community.

The RespectAbility Report: Given that there are more than 10 million Americans who are deaf or hard of hearing, and an additional seven million Americans with significant vision loss, do you plan on making your campaign materials accessible to all in the future?

Sen. Rick Santorum: Yeah, I’ll be very honest with you. We’re not the most well-funded campaign right now and so we’re just, we’re trying to make payroll every day and have folks produce materials to get it out there. But let me just assure you that when this campaign gets ramped up, which I have every confidence it will, we will do more than enough.

It’s really interesting – last time around you may recall my daughter got very ill during the campaign and we suspended the campaign for several days because of her illness. And when we came back on the campaign trail, it was a very different place. I’ll never forget, because she almost died. She came into the hospital with both lungs full, she couldn’t really breathe, her heart rate was, you know, 200. It was a very scary time for us and she really had a miraculous recovery for her. I mean, she’s a little girl with chronic lung disease who has very low muscle tone and yet she was able to overcome this pneumonia in a matter of 24 hours which just is incredible. She’s had illnesses before and she was five weeks on the ventilator the last time she had something like this. So we experience this miraculous recovery, but it gave our campaign pause, but it also focused the national attention on the fact that we had a child with a disability.

It’s not that we hid that but we saw the way the media treated Sarah Palin’s son and we didn’t want to expose our kids to that type of nastiness. It’s sad but that’s the reality and so we, and Bella was included in all the family pictures and all the, but we didn’t, for a variety of reasons didn’t really take out or highlight Bella. But that changed, because of the events.

I’ll never forget the, this was a Sunday morning we decided that I could go back on the campaign trail and it was a very short – we were right in the middle of it so we had to get back right away. And so we scheduled an event in St. Charles County, MO for the next day. And we thought, we put together a rally to talk about manufacturing. And so I showed up at this event the next morning, figuring who’s going to show up because it’s less than 24 hours’ notice and then it’s at a community college. Not exactly a hot bed of republicanism. And so we showed up and I saw all these people outside and I thought, oh gosh, they didn’t even call the college to open up the doors. And I said, you know, this is not a very good start, restart to the campaign. And I remember calling on the way in as I was watching these, calling our manager and saying why isn’t someone here to open up the doors. And he said what are you talking about? And I said well – So I get out of the car at that point and walked up to my staff and said why doesn’t someone open the doors? He says what do you mean? What are you talking about? I said, well, look at all these people out here. He said, well, that’s the overflow. And he said the place is jammed.

And I’ll never forget walking in there and getting up on the stage, all these people around, and I noticed for the first time, I’d never seen this before but I noticed two people in wheelchairs right in the front. And I looked over to my side and there was a man standing there with a little girl on his shoulders. She was about four or five years old and she had Down syndrome, which is trisomy 21. It’s an extra 21st chromosome. And Bella has trisomy 18, which is an extra 18th chromosome. And this little girl, I’ll never forget, she’s holding this sign waving it as enthusiastically as she can and the sign said, “I’m for Bella’s Dad.”

And the campaign really did change. People, at every event we had people with disabilities there. And that’s why I go back to the power of just example. The example of suspending the campaign for a little girl that most people would say well, you know, why do anything? She really can’t do much, you know, let her go. And we were told that by the doctors over and over again. And it provided, I think, a very strong and important sign of the value, no matter how disabled, the value of every child. And every person. And, again, I can’t overemphasize how much that changed our campaign, and how much of an impact it had on, well, on me, and certainly how I look at issues going forward.

The RespectAbility Report: Is there anything else you want voters with disabilities to know about?

The RespectAbility Report: Thank you very much for speaking with us.