On the Presidential Campaign Trail With Autism 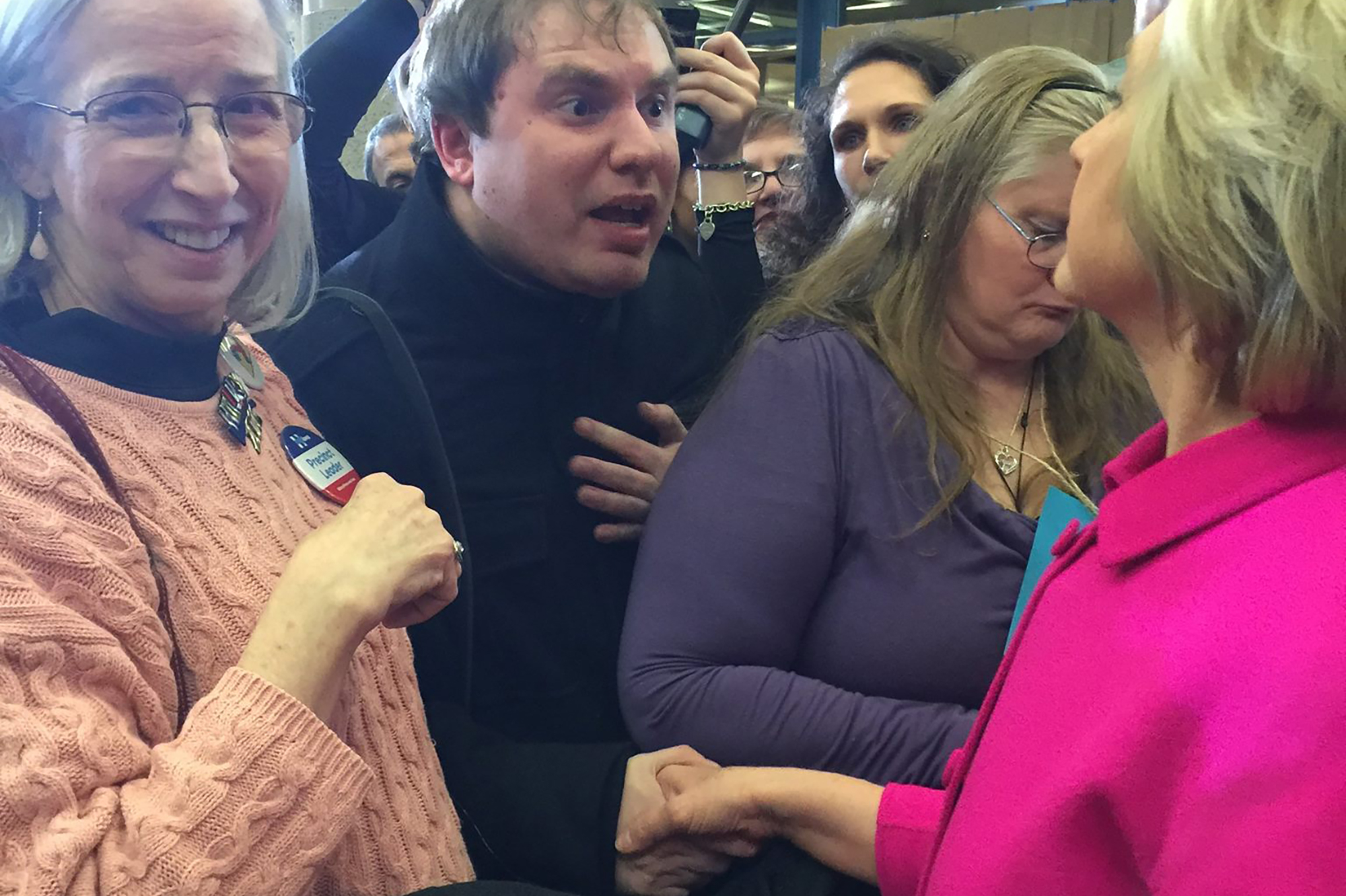 During the summer, James visited the White House.

In December, James was interviewed by Bloomberg about his work on the campaign trail in New Hampshire. 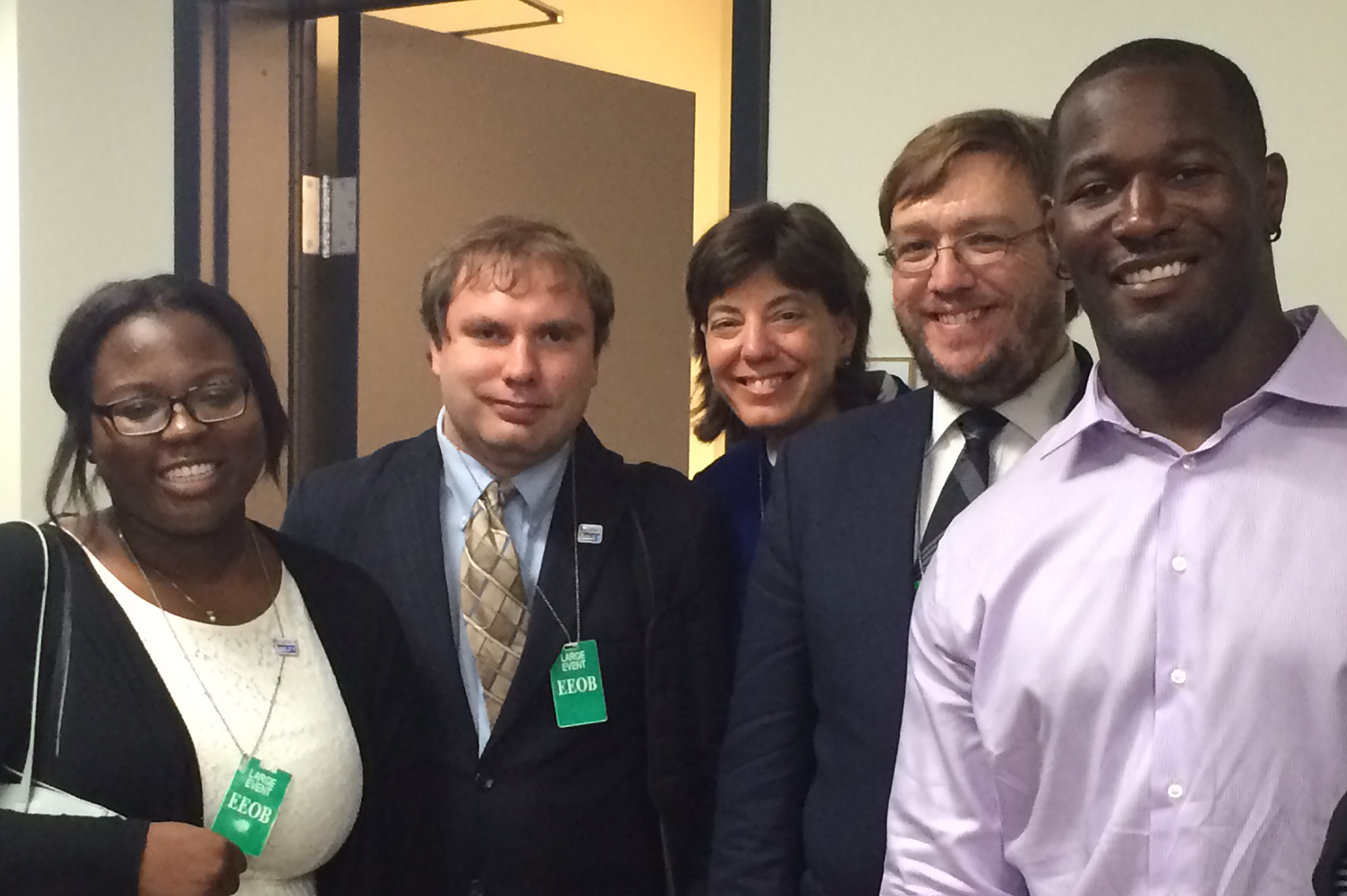 During the summer, James met Derrick Coleman, the first deaf offensive player in the NFL. During the summer, Gov. John Kasich hugged James after having a conversation about Autism and Asperger's, which James has. 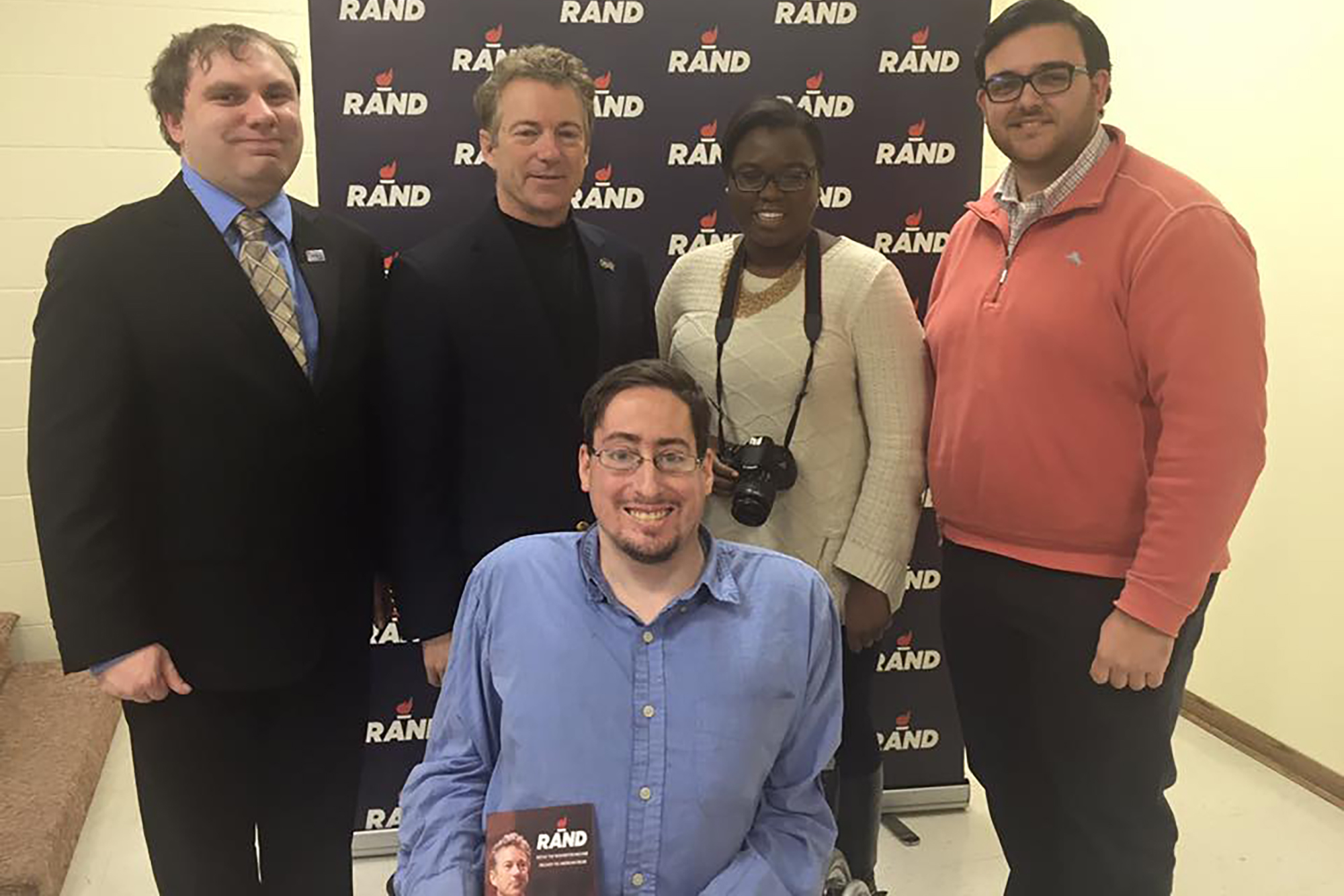 Dinner on the Campaign Trail

In January, James and his teammates enjoyed dinner at a diner in Des Moines, Iowa. As a summer fellow, James attended many events in the DC area including a celebration for the Americans with Disabilities ...

Des Moines, Iowa, Jan. 14 – I’m James Trout, one of The RespectAbility Report’s newest reporters. I’m covering the presidential candidates and what they say and do on disability issues. It’s literally five degrees in Iowa, and yet I’m having the time of my life! Each day I get to speak with different presidential candidates from both sides of the political aisle.

I was diagnosed with Asperger’s Syndrome when I was 15 years old, in between my freshman and sophomore years of high school. At the time, the high school that I attended had never had a student who had been diagnosed with Asperger’s before and they were completely unsure of what to do. In the roughly 15 years since, knowledge, awareness and acceptance of Autism Spectrum disorders has improved dramatically in our society. We still have, however, a long way to go for full inclusion in society due to numerous issues such as a higher unemployment rate than people without disabilities and being twice as likely to be the victims of violent crime.

I have had the privilege of working with RespectAbilityUSA as a policy fellow since June. As a fellow, I have traveled from Cleveland, Ohio, to Manchester, New Hampshire, and to Des Moines, Iowa, where I have been covering presidential candidates. The team at RespectAbility provided me with training and is covering all my expenses on this incredible adventure where I get to advance the rights of people with disabilities.

Our team is filled with self-advocates and experts on disability issues and we have a thriving fellowship program where young leaders can get concrete skills in politics, journalism and public policy. Our publication focuses on the intersection between politics and disability issues, and I have been honored to help contribute.

As a reporter for The RespectAbility Report, I have asked numerous candidates about their views and plans for employment for people with disabilities. My favorite moment as a RespectAbility Fellow has been attending presidential primary debates. For the Democratic debate on December 19, 2015, in Manchester, I experienced the debate from the spin room and had the opportunity to interview surrogates for all of the Democratic presidential hopefuls.

While interviewing State Democratic Chairman Raymond Buckley, he talked about his grandmother who had overcome a disability as a child and married and lived a full life. He talked about New Hampshire Gov. Maggie Hassan (D-NH), who is running for the U.S. Senate next year, and how her son Ben, who lives with Cerebral Palsy, inspired her to run for public office in the first place. As a self-advocate talking about our issues with politicians, I am able to show that people with developmental disabilities are able to live full lives in a variety of capacities.

As we are a nonpartisan nonprofit organization, I interview candidates on both sides of the aisle and I do not always agree with a candidate’s position on a variety of issues. It has been a bit of an internal challenge having to listen to and cover politicians with whom I don’t politically agree. I’ve learned to cover all candidates fairly and to avoid any politicking. Instead, I bring you information and interviews from all the contenders so you can make a clear choice based on facts.

What got me through it, though, was the fact that disability issues are a genuinely nonpartisan issue and it should not be politicized by either side. My attitude is that it ultimately is not about me, but about the 56 million Americans who live with disabilities, more than 70 percent of whom are unemployed.

In New Hampshire and Iowa, I attended numerous town halls where I had the opportunity to ask many candidates questions on employment for people with disabilities, event and website accessibility, crime rate, and other important topics. From Florida Sen. Marco Rubio to former Maryland Gov. Martin O’Malley, and from former Florida Gov. Jeb Bush to Kasich, I helped draw attention to important issues, all while educating both the candidate and the press who were covering the campaign.

It took three attempts to speak to New Jersey Gov. Chris Christie during my New Hampshire travels. The first two events were in small places that were not easily accessible. During the third, a town hall at the Pelham VFW Post, I was not called on to ask a question. However, I had my opportunity during the rope line, and Christie talked about his state’s Employment First policy.

Now, I’m in Iowa covering disability issues leading up to the Iowa caucuses. I’m now being recognized by candidates! Last week, Kasich publicly commended me for my work in being a self-advocate and bringing these issues to the table. I also am working with local disability leaders to press candidates to not only talk about our issues but also to walk the walk by making websites and events more accessible.

I invite you to join our team and me. Attend events with me or on your own. Let us know if you notice something great, like campaigns having ASL interpreters or live captions, or if you have an issue regarding accessibility. By holding fast to our community’s motto of “nothing about us, without us,” together we can ensure that changes occur for the better. You can do your part by becoming a citizen journalist. And together we will ensure the presidential candidates really reach out to our community.

In the end, I am eternally grateful to RespectAbility for the travel opportunities for work. I know that most internships and fellowships do not have major travel components and cannot afford to send their interns and fellows away on business for long stays.

If you’re a college or graduate student or someone in between jobs – with or without a disability – I encourage you to apply to be a RespectAbility Fellow. Apply to be a policy fellow like me or a communications fellow like Dahlia, my partner in crime who recorded and edited videos of me asking the candidates’ questions. Interested in a different type of fellowship? Learn more about our faith inclusion fellowships as well as ourdevelopment/fundraising fellowships! If the fellowship isn’t right for you, please share with people in your lives who would be interested. This is he opportunity of a life time!