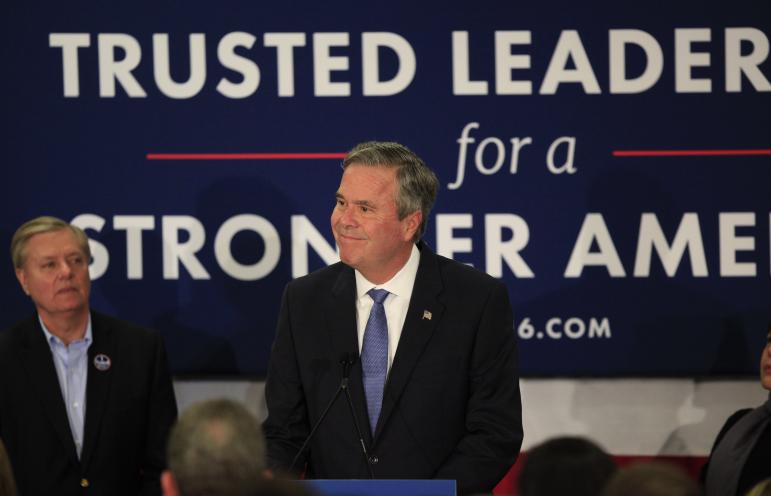 Published by Lauren Appelbaum on February 22, 2016

Washington, Feb. 22 – With Donald Trumps’ easy victory in South Carolina on Saturday, he left no doubt that he is the Republican front-runner for the party’s nomination. As Trump continues to insult people – recently attacking the Pope and Apple, and previously people with disabilities – his poll numbers stay higher than the other Republican candidates. Trump continues to have a strong lead ahead of Florida Sen. Marco Rubio and Texas Sen. Ted Cruz, who came in second and third with an effective tie in South Carolina.

Former Gov. Jeb Bush suspended his campaign following his fourth-place finish in South Carolina. Bush was the only Republican candidate to fully complete RespectAbility’s #PwDsVote 2016 Campaign Questionnaire. Furthermore, he talked about disability issues often on the campaign trail, discussing Autism in his announcement video and developmental disabilities in an appearance on The Late Show with Stephen Colbert. He was the first Republican candidate to include captions on his web-based campaign ads, citing the importance of ensuring that all people are able to access his message.

The former governor did not shy away from attacking Trump including in a two-minute ad that showcased Trump’s various insults on women, veterans and a reporter with a disability. The ad aired in New Hampshire prior to the primary where Bush performed better than expected.

“It is not a sign of strength disparaging the disabled in this country,” Bush says in the ad. “It is not; it is a sign of deep insecurity and weakness.”

His campaign was working on a plan to help the 70 percent of people with disabilities who are not employed obtain jobs.

“I truly believe that everybody should have a chance to rise up,” Bush said in January at a campaign stop in Grinnell, Iowa. “A country that works is one where the barriers for everybody is lifted.”

As governor, Bush said he traveled throughout the state talking to businesses “about the virtues of people with disabilities, how they add value to the workplace.”

“This is not charity,” he continued. “This is a simple fact that they do add value … for the morale of the workforce and for customers.”

From sharing a personal story about his daughter’s struggle with addiction to repeatedly promoting the importance of employment opportunities for people of all abilities, Bush’s inclusion of people with disabilities on the campaign trail was welcoming.

While Cruz, Rubio and Trump have addressed a variety of disability questions on the trail when answering questions by disability activists, none of the three front-runners have completed RespectAbility’s #PwDsVote 2016 Campaign Questionnaire. Gov. John Kasich and Dr. Ben Carson, who round out the Republican field, both completed parts of the questionnaire. RespectAbility has reached out to the Cruz, Rubio and Trump campaigns on multiple occasions and will continue to ask them to complete the questionnaire.