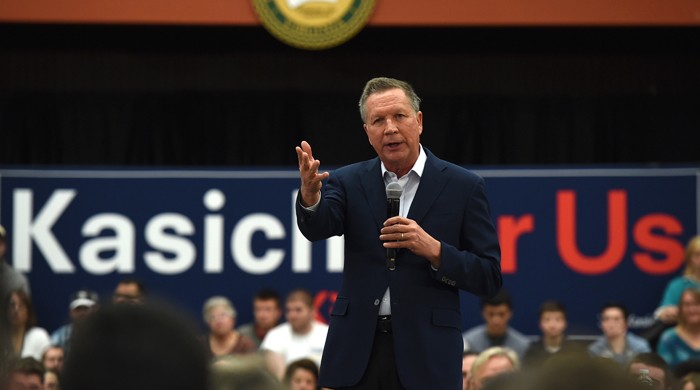 Kasich: Stand Up for Developmentally Disabled

“You know what kind of lobby the developmentally disabled have?” Kasich said at a town hall in Fairfax, Virginia, on Monday. “ZERO! Zero. Somebody has to stand up for them.”

In response to a woman asking a question about the needs of her 22-year-old son on the Autism spectrum to live a fulfilling life on his own, Kasich said they have to fix the system.

Kasich touted his record in Ohio in growing the economy and organizing the budget, discussing the state’s biggest percentage increase being for people with developmental disabilities. He also advocated for businesses to hire people with disabilities.

The Ohio governor spoke out against sheltered workshops.

“They don’t have to sit in some sheltered workshop being just pushed to the side. That is not right in our country.”

With Super Tuesday approaching, there are only five Republican presidential candidates remaining. Of these five, Kasich is one of just two, along with Dr. Ben Carson, who has responded to the #PwDsVote 2016 Campaign Questionnaire. In addition, the Ohio governor often talks about disability issues on the trail, offering an understanding of the needs of people with disabilities.

Since he entered the presidential race in July 2015, Kasich has been consistent in his advocacy for people with disabilities, especially in terms of health care expansion. During Monday’s town hall, he defended his decision to expand Medicare coverage as governor of Ohio. He pointed out that during his presidency “Ronald Reagan expanded Medicare five times” so he did not feel guilty about Medicare expansion, although he touted his opposition to the Affordable Care Act.

The progress being made in Ohio has been hampered by the fact that the state returned $18,215,538 to Washington. This hurts economic prospects for people with disabilities–especially the 50,300 Ohioans between the ages of 16 to 20–by not continuing to fund these vocational rehabilitation programs. State vocational rehabilitation programs operate by having the federal government give four dollars for every dollar that is spent by the individual state. However, if the states fail to spend the money or come up with matching funds, then the funds are returned to Washington, D.C.