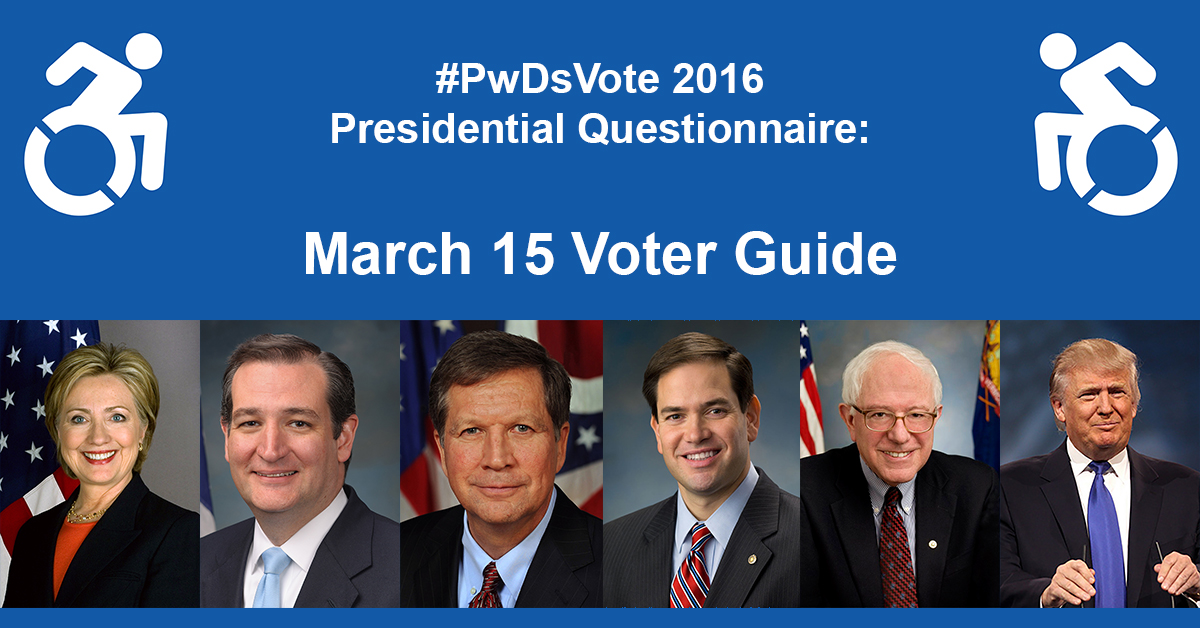 Published by Lauren Appelbaum on March 15, 2016

Washington, March 15 – As voters prepare to head to the polls in five states today, RespectAbility released its March 15th Disability Voter Guide. The #PwDsVote 2016 Campaign Questionnaire was designed for people with disabilities (PwDs) and those who love them to know where candidates stand on the issues. The questionnaire asked all of the presidential candidates on both sides of the aisle to comment on 16 disability questions. Former Sec. of State Hillary Clinton and Sen. Bernie Sanders responded by addressing all of the questions, and Ohio Gov. John Kasich filled out parts of the questionnaire. They each have significantly different views on the issues. Despite numerous requests in person and by phone and email, the campaigns of Senators Ted Cruz and Marco Rubio and Republican frontrunner Donald Trump have not yet filled out the questionnaire.

This Super Tuesday may be the most important one yet as Ohio and Florida become make it or break it states for Kasich and Rubio who call these states home. None of the states voting on Tuesday employ a large percentage of their citizens with disabilities. Just roughly 30 percent of people with disabilities are employed nationally, and North Carolina and Florida are even with the national average. Missouri (33 percent), Ohio (34 percent) and Illinois (36 percent) do not do much better. This lack of employment for people with disabilities creates poverty, powerlessness, and poor health. Polls and studies show that people with disabilities want the opportunity to have the dignity and independence that jobs provide.

RespectAbility says they will continue to urge Cruz, Rubio and Trump to submit their ideas for the disability community. When they do so, we will update the guide. The questionnaire is being distributed to more than 50,000 people who care about disability issues, more than ten thousand of whom live in the early primary states and the heads of more than 100 national disability organizations, many of whom will share with their own lists. RespectAbility also is placing online ads sharing the questionnaire.