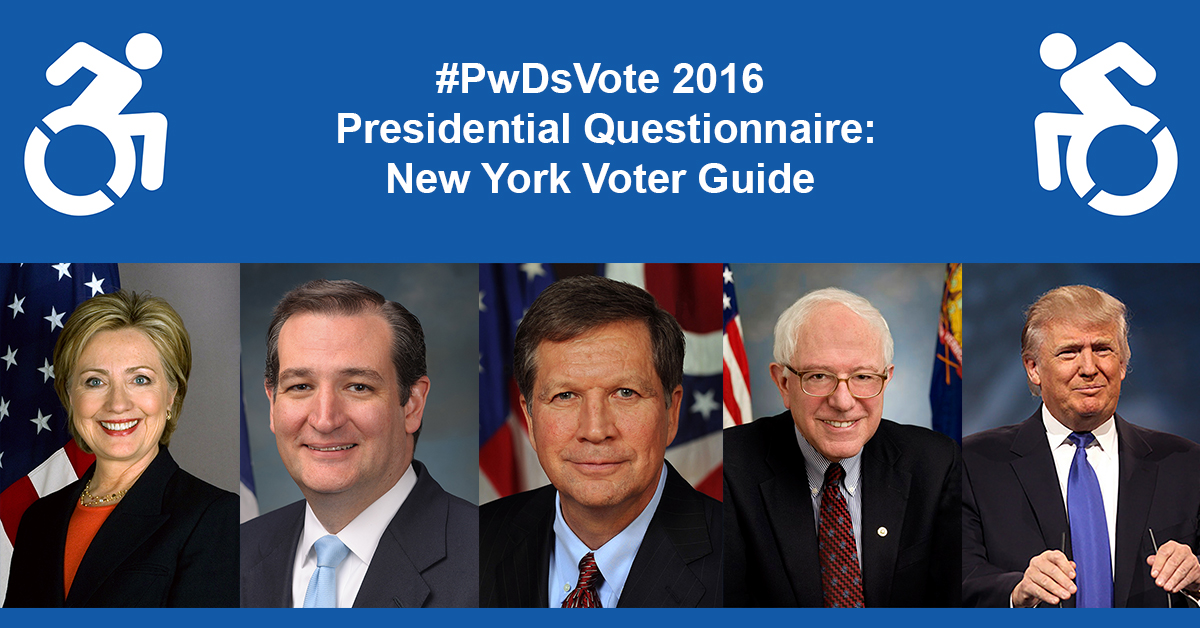 Published by Lauren Appelbaum on April 11, 2016

Washington, April 11 – As voters prepare to head to the polls in New York next week, RespectAbility is releasing its New York Disability Voter Guide. The #PwDsVote 2016 Campaign Questionnaire was designed for people with disabilities (PwDs) and those who love them to know where candidates stand on the issues. The questionnaire asked all of the presidential candidates on both sides of the aisle to comment on 16 disability questions. Former Sec. of State Hillary Clinton and Sen. Bernie Sanders responded by addressing all of the questions, and Ohio Gov. John Kasich filled out parts of the questionnaire. They each have significantly different views on the issues. Despite numerous requests in person and by phone and email, the campaigns of Sen. Ted Cruz and Republican frontrunner Donald Trump have not yet filled out the questionnaire.

Further, there are more than 68,800 youth with disabilities and each year a quarter of them will age out of school into an uncertain future.

RespectAbility has submitted comments for all 50 state’s drafts of the Unified Plan as required under Section 102 of the Workforce Innovation and Opportunity Act (WIOA). Thanks to WIOA, New York has the opportunity to improve its outcomes in terms of competitive, integrated employment for people with disabilities. The Empire State has much to learn from other states that have worked hard to achieve improved employment outcomes. Other states have a 50 percent employment rate for their citizens with disabilities. States like the Dakotas have achieved increased results by putting best practices into places.

New York has some outstanding Project Search programs, but far too few of them to even scratch the surface of the need. It also has a model inclusive employer in IBM, yet the state has not provided enough STEM qualified people with disabilities to fill roles there and elsewhere.