Published by Lauren Appelbaum on April 12, 2016

Washington, April 12 – There’s a noticeable shift in the content of the Democratic presidential nominees as Hillary Clinton and Bernie Sanders are taking turns pushing the disability agenda – a first for any presidential campaign.

Both the former Secretary of State and Vermont Senator were quick to complete the #PwDsVote 2016 Campaign Questionnaire. They have significantly different views on the issues.

Since then, the candidates have taken turns trying to one-up each other on issues such as subminimum wage (see statements by both Clinton and Sanders) and the Disability Integration Act (Clinton, Sanders) while on the campaign trail in New York.

The state’s primary is coming up in less than a week on April 19 and both Democratic hopefuls are pulling out all the stops to win the state they both call home.

The disability vote can play a large part in that.

While the disability community is the largest minority in America, a lot of the community’s agenda has not been met in a similar way where other minorities and other interest groups have been able to reach some attainable goals.

“Disability is an issue that is really still in the shadows,” Mizrahi added. “There’s so much stigma around disability that people don’t really talk about it publicly.”

Clinton and Sanders are working to change that.

As they vie for the Democratic nomination, neither are taking the disability vote for granted.

The Clinton campaign’s active disabilities committee is aggressively on social media working the disability vote. Supporters use a “Vote” icon on a variety of social media sites. The diverse image includes an African American male in a wheelchair as one of the four individuals portrayed.

Both candidates have made a real effort to ensure that their events have ADA sections with enough room for those using wheelchairs and other people with disabilities. Furthermore, both campaigns are ensuring that ASL interpreters are present at all of their large events.

They often talk about a variety of disability issues on trail – from employment and stigma to Autism, about which Clinton unveiled a policy plan earlier this year.

In contrast, neither of the leading Republican candidates have filled out the #PwDsVote questionnaire (though Ohio Gov. John Kasich has answered some of the questions). Until the Republican frontrunners change this, in the general election, the Republican Party could cede the disability vote, despite the fact that polling shows the disability community is a swing voter group.

2012 Republican presidential nominee Mitt Romney did not reach out to voters with disabilities at all, which became a contributing factor to his loss. 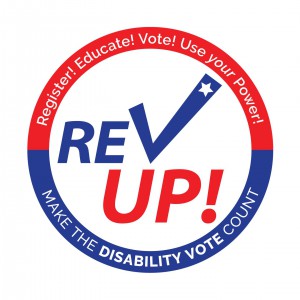 Numerous initiatives around the country have popped in addition to the #PwDsVote Questionnaire and RespectAbility’s outreach on the trail including: #CripTheVote, a nonpartisan campaign to engage both voters and politicians in a productive discussion about disability issues in the United States, with the hope that disability takes on greater prominence within the American political landscape; and the American Association of People with Disabilities’s REV UP (Register, Educate, Vote and Use your Power) campaign, among others.