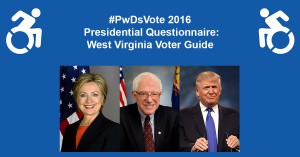 West Virginia currently has a 25.6 percent labor force participation rate for people with disabilities, the lowest currently held in the United States. Other states, such as the Dakotas, have values almost twice as high as West Virginia with 50 percent of their populations with a disability successfully employed. View the rankings of all 50 states and compare.

West Virginia has a lot of ground to cover and faces significant barriers in terms of encouraging more people with disabilities to pursue employment. Some West Virginians want the meager amount of money that comes from benefit checks, and there have been instances of fraud where people have claimed a functional impairment in order to get on disability. RespectAbility has submitted comments for all 50 state’s drafts of the Unified Plan as required under Section 102 of The Workforce Innovation and Opportunity Act (WIOA). In reviewing West Virginia’s Unified State Plan, it can be determined that West Virginia also faces significant economic challenges as manufacturing, mining and farming decline.