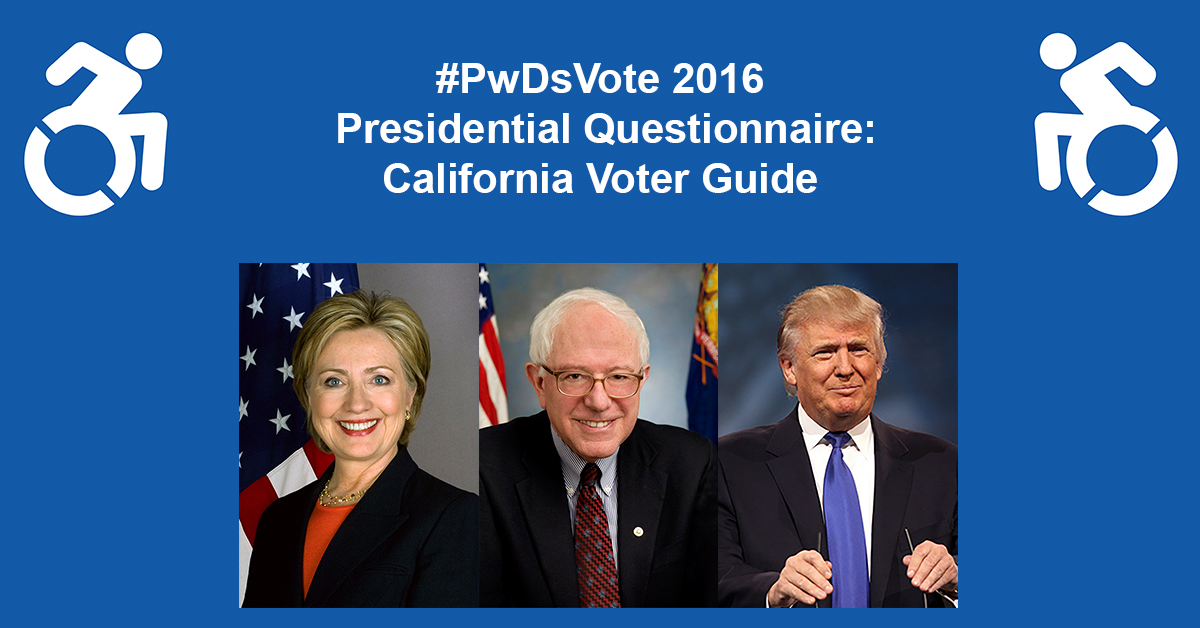 5.9 Million Eligible Voters with a Disability in California

Washington, June 2 – Next week’s California primary is being called the final battleground for the Democratic primary. While Hillary Clinton is expected to secure the nomination in New Jersey, which also goes to the polls on June 7, California has become an unexpectedly tight race between her and Bernie Sanders, who has pledged to stay in the race until the Democratic convention in July.

California has 5.9 million eligible voters with a disability, and as it is a race to watch, RespectAbility is sharing its California Disability Voter Guide. California’s voters are looking to know where the candidates stand on important disability issues in order to increase opportunities for competitive, integrated employment for people with disabilities.

“Closing the turnout gap is a high priority for voters with disabilities,” Ted Jackson, California Foundation for Independent Living Centers’ Community Organizing Director, said. “It will demonstrate that we are building electoral power and hold our elected officials accountable to the strength of our voting bloc.”

Currently, California ranks 34th out of the 50 states in regards to the labor force participation rate of people with disabilities, which currently stands at just 33.3 percent (compared to 71 percent of people without disabilities). In other states, such as the Dakotas, 50 percent of their populations with a disability are successfully employed. The ranking table for all fifty states can be seen here.

RespectAbility has submitted comments for all 50 state’s drafts of the Unified Plan as required under Section 102 of The Workforce Innovation and Opportunity Act (WIOA).  Given the size of California’s population and economy, the Golden State should be able to attain higher values, and WIOA offers the opportunity to do so.

There are more than 115,000 youth with disabilities in California, and each year more than a quarter of them will age out of school into an uncertain future. Alternatively, many of the state’s baby boomers will be aging out of the workforce, leaving many positions open and unfilled. This change in demographics, paired with the increasing demand in sectors such as accommodation and agriculture create even more openings in the work force that need to be filled.

California has the opportunity to lead by example by including more people with disabilities in the workforce thanks to WIOA. As the largest state in terms of population and economy, many other U.S. states look to California for guidance. WIOA gives California the opportunity to set the stage for all other participants and show that people with disabilities can be a valuable asset to any employer.

Looking to learn more about how to vote in California with a disability? Check out the Disability Organizing Network’s #VoteDisability Election Center: https://disabilityorganizing.net/voting/.