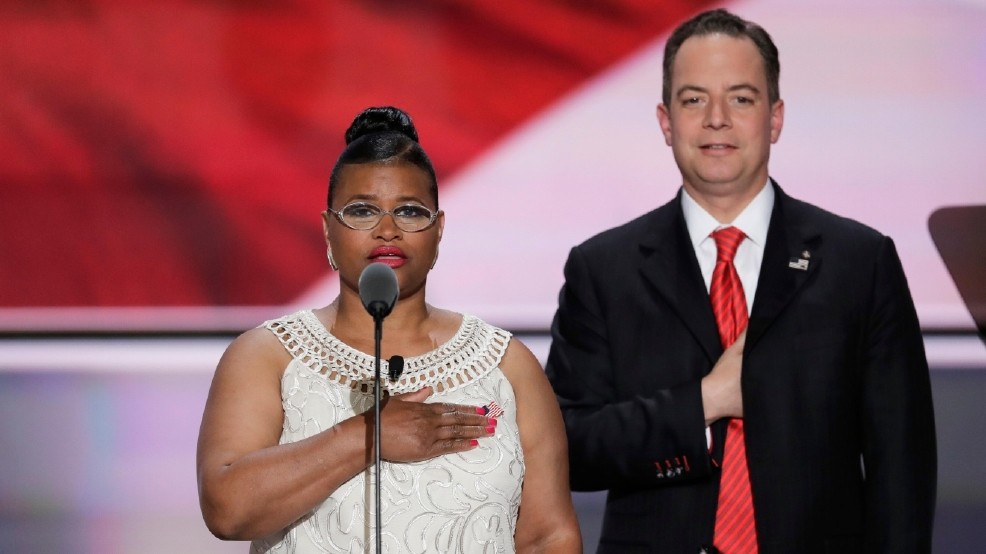 Who is Margo Hudson, the Woman who Recited the Pledge of Allegiance at the RNC?

Cleveland, July 20 – Margo Hudson passed the GED test in 2012 on her sixth try after deciding to start studying for her degree when she was 45 years old.

Four years later, Hudson delivered the Pledge of Allegiance during the third evening of the Republican National Convention.

While Hudson was not given an opportunity to share her story, it is an important one to tell.

She grew up on the South Side of Chicago with little support from her family or school. Her learning disability went undiagnosed and she dropped out of high school in the tenth grade.

“No one really cared what was happening to me,” she said. “I had to leave.”

After working at several low-paying jobs, Hudson began cleaning airplanes after they landed at the Cleveland airport.

“I kept applying for jobs I couldn’t get because I didn’t have a high school degree,” she said. “It bothered me that I didn’t have a GED. I didn’t want to clean planes for the rest of my life. I had to do something about it. One day I was watching my colleagues talk and play cards while we waited for planes to land and I thought, I could use this time to study. I could use that time to work toward my degree.”

She spent seven years as a student receiving one-on-one tutoring at Seeds of Literacy in Cleveland while studying for her GED. A doctor’s diagnosis of her learning disability doubled the time she was allowed to take tests.

“After I earned my GED, I started feeling better about myself,” Hudson said in a Seeds of Literacy blog post. “Life just looked different to me once I got that GED. It made me take advantage of different things that I never took advantage of when I didn’t have my GED. It gave me a new outlook on life, and my self-esteem rose. I tried a lot of new things, and a lot of new challenges.”

After receiving a second chance at her education, Hudson has become a vocal champion for the power of adult learning and now helps others as a tutor.

“I’m forever grateful for Seeds of Literacy for helping me,” she said in the blog post. “That’s why I spread the word, because it helped me and I know it can help others, if they apply themselves as I did. You just have to be determined and persevere.”

In April of this year, Hudson received the Adult Learner of the Year award by the Commission on Adult Basic Education, as well as the Governor’s Courage Award during Gov. John Kasich’s State of the State address.