Published by Lauren Appelbaum on September 9, 2016 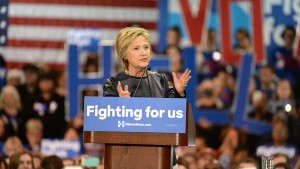 Another reason is stigma. People with Autism are more likely to be considered mainstream. According to the Centers for Disease Control, one out of every 68 children has some feature that places them on spectrum for autism disorders. According to the National Alliance on Mental Illness, approximately 1 in 5 adults in the U.S.–43.8 million, or 18.5 percent–experiences mental illness in a given year. However, people with mental illness often hide their disability from loved ones for fear of negative consequences.

Clinton’s plan aims to curb that – by “integrating our healthcare systems and finally putting the treatment of mental health on par with that of physical health.”

“Her goal is that within her time in office, Americans will no longer separate mental health from physical health when it comes to access to care or quality of treatment,” the plan reads. “The next generation must grow up knowing that mental health is a key component of overall health and there is no shame, stigma, or barriers to seeking out care.”

“Unfair stigmatizations of people with drug addiction or mental illness – both forms of disability according to the Americans with Disabilities Act – must end,” said RespectAbility President Jennifer Laszlo Mizrahi. “Not only does shaming these groups encourage self-imposed barriers to employment, maintaining a family and other important parts of life, but it also isolates more than 43.6 million Americans ages 18 and up – that’s more than 18 percent of our country.”

Alison Barkoff, formerly of the Bazelon Center for Mental Health Law and now with the Center for Public Representation, said Clinton’s plan would help to fully integrate people with mental illness into the community under the Supreme Court’s Olmstead decision.

“Secretary Clinton’s mental health agenda proposes federal investment to expand the critical community-based services that have been the backbone of Olmstead reforms in states, including integrated affordable housing, employment supports, crisis services, and peer supports,” Barkoff said in response to the release.

“Her plan recognizes that too many people with mental illness are involved in the criminal justice system due to a lack of community services, training of law enforcement, and diversion options,” she continued. “And her proposal to enforce mental health parity is critical to ensuring that people can access needed mental health services. Finally, it is positive that her plan includes a focus on youth and young adults, including early intervention and school-based supports for students with mental health needs.”

Clinton has been discussing mental illness for a long time on the trail.

At the same December town hall where Clinton announced she would be unveiling an Autism plan, she also talked about the need to remove the stigma from mental illnesses and enforce mental health parity.

Back in October, her campaign featured a video of her talking to a young African American boy who asked her about the high incarceration rates of people with mental illness.

“A lot of people who end up in jail had mental health problems that they should be getting treatment for,” Clinton responded.“ I want to have many more places where people can get help and then I want to help more people go to those places and be treated.”

In her plan, Clinton pledged that she would convene a White House Conference on Mental Health during her first year as president “to highlight the issue, identify successful interventions, and discuss barriers that must be removed to improve today’s system.”

By putting forward such a plan, people in the disability community would be able to hold Clinton accountable if she succeeds in her race for the White House.

As last week’s Washington Post editorial pointed out, Clinton’s proposals have a real chance of becoming law if she becomes president. By placing such an emphasis on mental health being considered on parity as physical health and reducing stigma around mental health, the tide could change for the 40 percent of people with mental illness who currently are not receiving medical assistance.

The issue of stigma, however, must be addressed further – by all candidates. While the disability community is the largest minority in America, a lot of the community’s agenda has not been met in a similar way where other minorities and other interest groups have been able to reach some attainable goals.

“Disability is an issue that is really still in the shadows,” Mizrahi added. “There’s so much stigma around all types of disability that people don’t really talk about it publicly. While this has changed during the 2016 cycle, there is still more work to be done.”