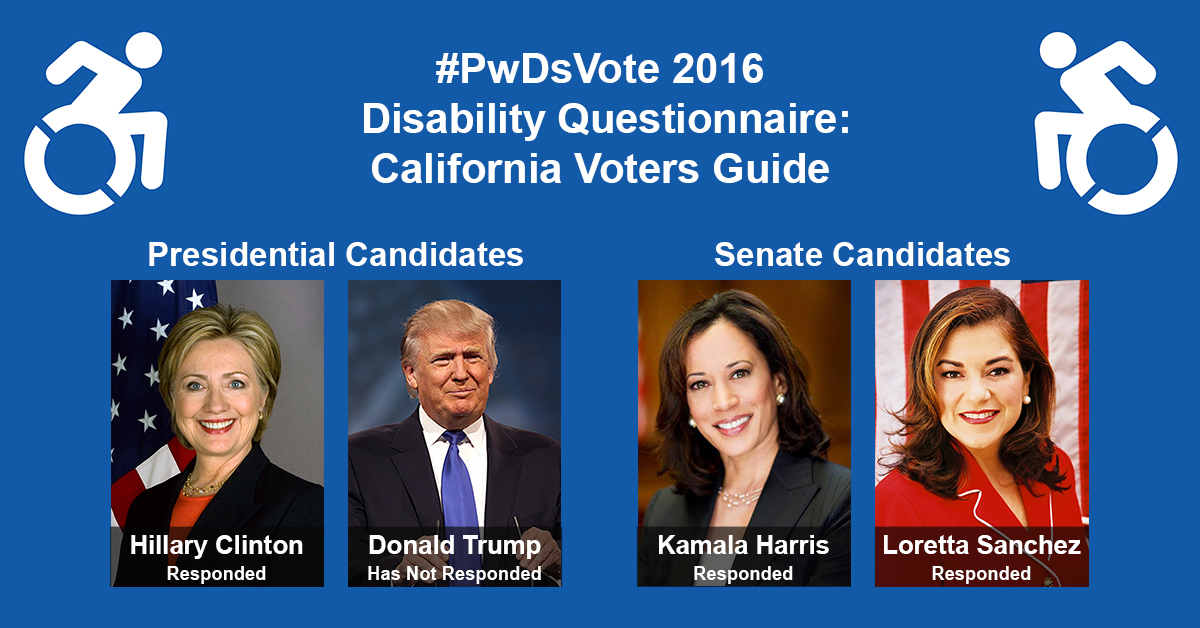 California Senate Candidates Speak Out Against Discrimination and For Disability Rights

Washington, Oct. 11 – As voters get ready to head to the polls in California, RespectAbility has released its California Disability Voter Guide. Democratic candidates Loretta Sanchez and Kamala Harris are seeking California’s open senate seat, and both of them, as well as presidential candidate Hillary Clinton, have completed the #PwDsVote Disability Campaign Questionnaire for people with disabilities and have very different solutions to pressing problems. By both Senate candidates filling out the questionnaire, each of them communicates that disability issues matter to them

California has an open Senate race and both major-party candidates have responded, allowing the 4,019,882 citizens with disabilities a chance to compare them on a variety of issues.

In her response, Sanchez talked about how disability rights are important for making a better America.

“No American should be discriminated against because of a physical or mental disability,” she said. “To truly create an equitable world, we must eradicate the social stigma against people with disabilities. Disability rights are human rights.”

The Harris campaign also responded, speaking of her dedication to supporting legislation that further disability rights.

“As San Francisco District Attorney and California Attorney General, Kamala has a lengthy record of advocating for civil rights, including disability rights, women’s rights, racial justice, and LGBT equality,” the campaign said. “In the Senate, Kamala will continue her civil rights advocacy for persons with disabilities by ensuring that the ADA is fully enforced and that similar international laws, such as the Convention on the Rights of Persons with Disabilities, are given full effect.”

California has the opportunity to lead by example by including more people with disabilities in the workforce thanks to Workforce Innovation and Opportunity Act (WIOA). As the largest state in terms of population and economy, many other U.S. states look to California for guidance. WIOA gives California the opportunity to set the stage for all other participants and show that people with disabilities can be a valuable asset to any employer.

RespectAbility, founded in 2013, is a nonpartisan, nonprofit organization working to end stigmas and advance opportunities for people with disabilities. It has submitted comments for all 50 state’s drafts of the Unified Plan as required under Section 102 of WIOA. According to the current draft of California’s state plan, There are more than 115,000 youth with disabilities in California, and each year more than a quarter of them will age out of school into an uncertain future.

One of the most important facets of WIOA is that it raises expectations for youth with disabilities and assists states to provide them with the supports they need to ensure success. Indeed, as California’s Baby Boomers retire and your state’s economy evolves, employers are starting to experience increasing talent shortage. Californians with disabilities are an untapped resource that can be trained to bridge that gap. Indeed, a recent detailed study by the Kessler Foundation and the University of New Hampshire shows the 70 percent of working age people with disabilities are striving for work.

Evidence shows that people with disabilities can provide a wonderful solution to companies and other employers that want to succeed. The diverse skills, greater loyalty and higher retention rates of people with disabilities are already starting to meet employer talent needs in increasing numbers around America. With WIOA, California can benefit from that progress if it truly breaks down silos within government agencies and partners, and lets innovation, based on evidence-based practices, take place.

Remember to Vote
California residents can vote for the candidates of their choice on the standard voting schedule or through early voting. Californians have until Oct. 24, 2016 to register to vote for the election. Register to vote online at: California Online Voter Registration. Voters also can cast an early vote. Early voting times vary by county in California, so you will need to ask your local county elections office. More information regarding county elections offices can be found at: County Elections Offices. If voters are unable to partake in early or standard voting, any registered Californian can submit a vote through an absentee ballot as well. Voters can apply for an absentee ballot through the mail, on the phone, or in person at a local county elections office. More information and assistance regarding absentee ballots can be found at: Vote by Mail.