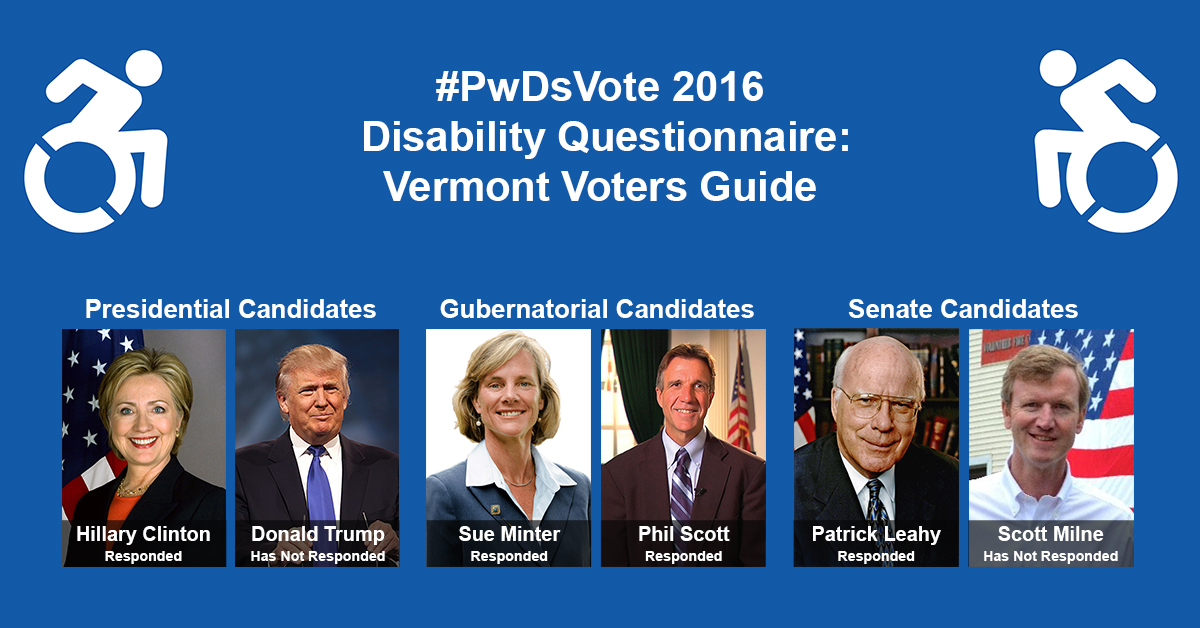 Washington, Oct. 11 – In addition to the upcoming presidential election, voters in Vermont also will be voting for candidates running for Senate and Governor. To help Vermonters prepare, Respectability is releasing its Vermont Disability Voter Guide. Democrat candidate Sue Minter and Republican Phil Scott, who are seeking the governorship, as well as incumbent Sen. Patrick Leahy and presidential candidate Hillary Clinton, have responded to the #PwDsVote Disability Campaign Questionnaire for people with disabilities and have very different solutions to pressing problems. The candidates who have chosen to respond have communicated that disability issues matter to them.

Vermont has an open gubernatorial as well as a Senate election. Both of the major-party candidates have responded from the gubernatorial campaign, as well as the incumbent in the Senate race, allowing the 85,967 citizens with disabilities a chance to compare them on a variety of issues.

Vermont’s elected officials have its work cut out for them when it comes to ensuring their state’s citizens with disabilities have employment opportunities. The state’s employment rate for people without disabilities lies at 80.4 percent. Meanwhile, only 36.2 percent of working-age Vermonters with disabilities statewide are employed. Greater precision is needed for the workforce system to evolve to tap into the labor resource that the disability community represents. This election cycle brings with it an opportunity to improve this aspect, as well as to increase opportunities for competitive, integrated employment for people with disabilities. Voters are looking to know where the candidates stand on important disability issues so that they can help improve these efforts.

Phil Scott mentions in the questionnaire how his commitment to reducing stigmas of people with disabilities led him to write the opening message for the Statewide Independent Living Council’s K-12 curriculum.

“I received this invitation because of my close connection and commitment to reducing the stigmas and challenges facing people with disabilities and their ability to live and work independently” he stated. “As Governor, I will uphold Vermont’s equal opportunity employment policy, which ensures fair hiring practices based solely on personal skill and merits. Inspired by my father, I frequently participate in charity events, especially bike rides, which raise money and awareness for adaptive sports, athletes with disabilities and more robust accommodations and services for all people with disabilities.”

Sue Minter also responded to the questionnaire, mentioning her deep commitment to civil rights and full inclusion of all citizens.

“As governor, I will be outspoken in opposition to all forms of discrimination, using the power of the office to educate, communicate and advance the cause of full inclusion for Vermonters with disabilities,” she said in the questionnaire. “That will include access to independent living, education, affordable and accessible housing, health care, and job opportunities. I believe that the most effective means of ending stigma is full inclusion in all aspects of community life.”

Leahy did not answer each question individually, although he sent a statement addressing several of the issues brought up in the questionnaire. In his response, he talked about his support for the Americans with Disabilities Act of 1990.

“I am committed to fighting discrimination that prevents a person from obtaining a job or accessing public services,” he responded. “Congress needs to lead the way, backed by actions by the U.S. Department of Justice, in allowing those with disabilities to fully participate and contribute to everyday life. We must, at every level of government, improve the enforcement of the Americans with Disabilities Act, and hold violators accountable.”

Leahy’s opponent Scott Milne has not yet replied, but if he were to do so, his responses would be posted verbatim to The RespectAbility Report.

Vermont Needs to Improve Outcomes for Citizens With Disabilities
There are 48,856 Vermonters with disabilities who are between the ages of 18-64. Additionally, there are 3,500 Vermonters ages 16-20 with disabilities. More than 12,000 Vermont students have individual education plans (IEPs). However, many Vermonters with disabilities have not yet received a disability diagnosis they need, and thus are not yet receiving the school accommodations and supports that they need to succeed. Many students who might need support to succeed academically instead find themselves trapped into a lifetime of poverty or flowing down the school to prison pipeline.

However, employment rates alone do not tell the whole story of disability employment in Vermont. Indeed, when you consider the staggering 44.2-point gap in the Labor Force Participation Rate between people with and without disabilities, Vermont drops to 42nd in the nation. Further, there are more than 3,800 youth with disabilities between age 16 and 20 in Vermont. Each year a quarter of them will age out of school into an uncertain future. Thanks to the upcoming elections and the implementation of the Workforce Innovation and Opportunity Act (WIOA), Vermont has the chance to invest resources in successful models and implement best practices to expand job opportunities for people with disabilities.

RespectAbility, founded in 2013, is a nonpartisan, nonprofit organization working to end stigmas and advance opportunities for people with disabilities. It has submitted comments for all 50 state’s drafts of the Unified Plan as required under Section 102 of WIOA. According to the current draft of Vermont’s state plan, 82,594 Vermonters have a disability. While this is a precise number, it is not helpful from a workforce development perspective. This number does not reflect the critical distinctions between youth with disabilities, working age people with disabilities, and older Vermonters who will likely age into disability. Failure to make such distinctions presents an incomplete picture of the challenge.

One of the most important facets of WIOA is that it raises expectations for youth with disabilities and assists states to provide them with the supports they need to ensure success. Indeed, as Vermont’s Baby Boomers retire and your state’s economy evolves, employers are starting to experience increasing talent shortage. Vermonters with disabilities are an untapped resource that can be trained to bridge that gap. Indeed, a recent detailed study by the Kessler Foundation and the University of New Hampshire shows the 70 percent of working age people with disabilities are striving for work.

Evidence shows that people with disabilities can provide a wonderful solution to companies and other employers that want to succeed. The diverse skills, greater loyalty and higher retention rates of people with disabilities are already starting to meet employer talent needs in increasing numbers around America. With WIOA, Vermont can benefit from that progress if it truly breaks down silos within government agencies and partners, and lets innovation, based on evidence-based practices, take place.

However, the gap in the labor force participation between people with and without disabilities is still too large around the entire country. This lack of employment for people with disabilities creates poverty, powerlessness, and poor health. Polls and studies show that people with disabilities want the opportunity to have the dignity and independence that jobs provide. Greater precision is also needed for the workforce system to evolve to tap into the labor resource that the disability community represents. More information is needed about the composition of Vermont’s disability community and clearer data is needed about what types of disabilities make up the total number.

Remember to Vote
Vermont residents can vote for the candidates of their choice either on election day or through early voting. Vermonters have until Nov. 2, 2016, to register to vote for the presidential general election. You can register to vote online at: Online Voter Registration System. Voters can cast an early vote from Sept. 23, 2016 to Nov. 7, 2016. If voters are unable to partake in early or standard voting, any registered Vermont voter can submit a vote through an absentee ballot. Voters can apply for an absentee ballot online, through the mail, or in person at a local town clerk’s office. More information and assistance regarding absentee ballots and early voting can be found at: Vermont’s Early or Absentee Voting Process.