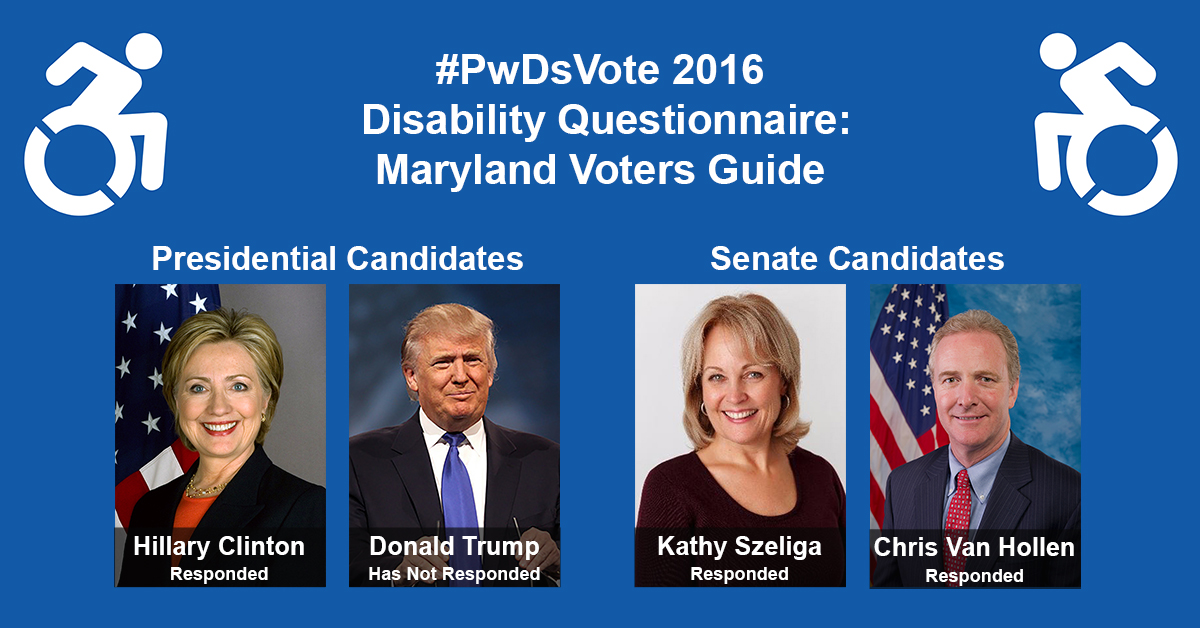 Maryland Senate Candidates Pledge to Work for People with Disabilities

Published by Lauren Appelbaum on October 11, 2016

Rockville, Md., Oct 11 – As voters get ready to head to the polls in Maryland, RespectAbility has released its Maryland Disability Voter Guide for the upcoming senate and presidential races. Both Republican Del. Kathy Szeliga and Democratic Rep. Chris Van Hollen, who are seeking the state’s open U.S. Senate seat, as well as presidential candidate Hillary Clinton, completed the #PwDsVote Disability Campaign Questionnaire for people with disabilities and have very different solutions to pressing problems. By both Senate candidates filling out the questionnaire, each of them communicates that disability issues matter to them.

Maryland has an open Senate race and both major-party candidates have responded, allowing the 622,682 citizens with disabilities a chance to compare them on a variety of issues.

In his response, Van Hollen talked about his experience of people with disabilities serving on his staff and through his internship program, informing his views.

“When our nation underestimates or devalues the contributions of this community, we do ourselves a disservice,” he responded. “Therefore, we must always strive to break down barriers, confront stigma, and increase independence and self-determination. We must communicate with employers to share best practices and debunk stereotypes to help them understand ways to integrate their workplaces and take advantage of the talents of those in the disability community. Programs like Project SEARCH and Broad Futures in my Congressional district are making important strides in this critical work.”

Szeliga, who has experience working with ARC Maryland, also spoke out about the need to reduce stigma and discrimination.

“We must make sure that all Americans are treated equally no matter what they look like, where they come from, or if they have a disability,” she responded in the questionnaire. “As the next U.S. Senator from Maryland, I look forward to continuing to work with ARC Maryland and to work with RespectAbility to make sure that people with disabilities are not being discriminated against.”

Employment Varies Across Maryland
There are 321,409 Marylanders with disabilities who are between the ages of 18-64. Additionally, there are 22,000 Marylanders ages 16-20 with disabilities. More than 90,000 Maryland students have individual education plans (IEPs). However, many Marylanders with disabilities have not yet received a disability diagnosis they need, and thus are not yet receiving the school accommodations and supports that they need to succeed. Many students who might need support to succeed academically instead find themselves trapped into a lifetime of poverty or flowing down the school to prison pipeline.

Today Maryland has the opportunity to work hard to improve outcomes in terms of competitive, integrated employment for people with disabilities. Currently only 39.1 percent of working-age Marylanders with disabilities are employed compared to 78 percent of those without disabilities. View the rankings of all 50 states and compare.

However, looking at the topline numbers of Maryland alone can be misleading. According to the U.S. Census Bureau’s 2010-2012 American Community Survey, fully 47.97 percent of working-age people with disabilities in Montgomery County is employed. However, in Baltimore City, only 26.5 percent are employed. Of those Marylanders with disabilities who are working, many are working only part time or at subminimum wages in sheltered workshops. While these statistics are better than the national average, fully 56,600 working-age Marylanders with disabilities are living on government benefits. This costs close to $2 billion a year in SSDI benefits alone.

Maryland Needs to Improve Outcomes for Citizens With Disabilities
RespectAbility, founded in 2013, is a nonpartisan, nonprofit organization working to end stigmas and advance opportunities for people with disabilities. It has submitted comments for all 50 state’s drafts of the Unified Plan as required under Section 102 of the Workforce Innovation and Opportunity Act (WIOA). According to the current draft of Maryland’s State Plan, 3,000 Marylanders with disabilities are on waiting lists to receive the supports that they need in order to successfully become employed. This waiting period can last up to 18 months, critical time in which their job readiness and work skills can degrade from inactivity. Additionally, in 2012 Maryland’s vocational rehabilitation only obtained jobs for 2506 Marylanders. While the Division of Rehabilitative Services (DORS) is doing some good work, DORS needs to achieve greater returns to scale to improve outcomes for its citizens with disabilities.

One of the most important facets of WIOA is that it raises expectations for youth with disabilities and assists states to provide them with the supports they need to ensure success. As Maryland’s Baby Boomers retire and the state’s economy evolves, employers are starting to experience increasing talent shortage. Marylanders with disabilities are an untapped resource that can be trained to bridge that gap. Indeed, a recent detailed study by the Kessler Foundation and the University of New Hampshire shows the 70 percent of working age people with disabilities are striving for work.

Evidence shows that people with disabilities can provide a wonderful solution to companies and other employers that want to succeed. The diverse skills, greater loyalty and higher retention rates of people with disabilities are already starting to meet employer talent needs in increasing numbers around America. With WIOA, Maryland can benefit from that progress if it truly breaks down silos within government agencies and partners, and lets innovation, based on evidence-based practices, take place.

Remember to Vote
Maryland residents can vote for the candidates of their choice either on the standard voting schedule or through early voting. Marylanders have until 9:00pm on Oct. 18, 2016, to register to vote for the presidential general election. Register to vote online at: Voter Registration and Absentee Ballot Request. Voters can cast an early vote from Thursday, Oct. 27, 2016 through Thursday, Nov. 3, 2016 from 8:00 a.m. until 8:00 p.m. More information regarding early voting can be found at: Early Voting. If voters are unable to partake in early or standard voting, any registered Maryland voter can submit a vote through absentee ballots as well. Voters can apply for an absentee ballot online, through the mail, or in person at a local board of elections. More information and assistance regarding absentee ballots can be found at: Absentee Voting.