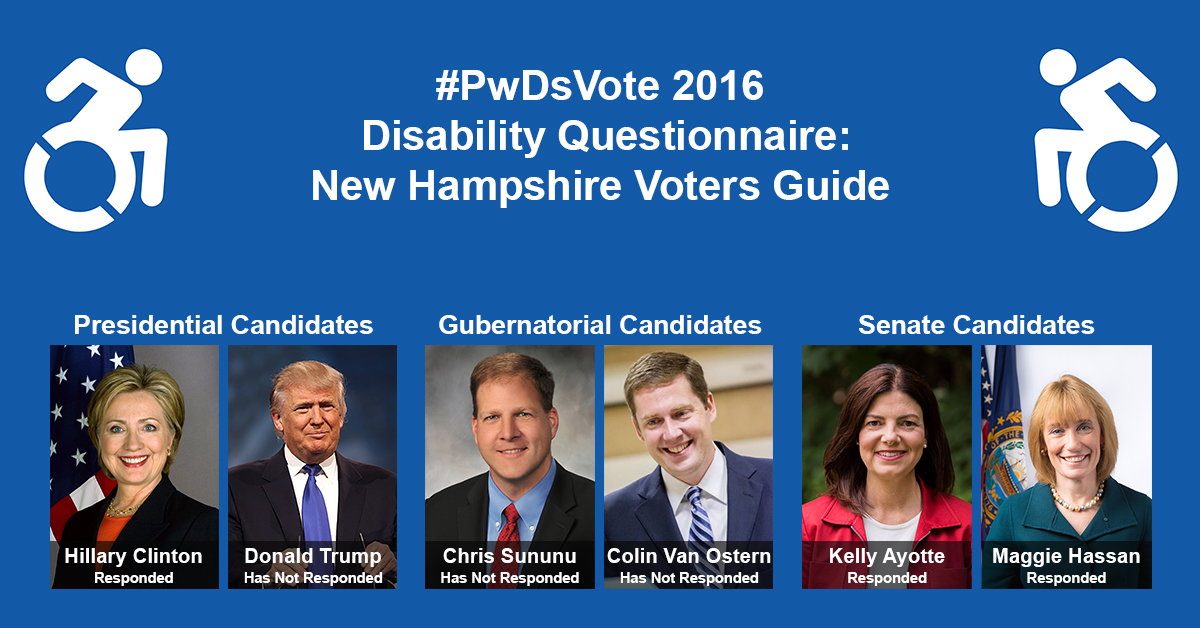 Gubernatorial Candidates Have Yet to Complete #PwDsVote Disability Questionnaire

Washington, Oct. 11 – Citizens of New Hampshire will soon be heading out to vote for not only the upcoming presidential election, but also the statewide senate and gubernatorial elections. In turn, RespectAbility is releasing its New Hampshire Disability Voter Guide. Democrat hopeful Maggie Hassan and incumbent Republican Kelly Ayotte are running for New Hampshire’s Senate seat and have completed the #PwDsVote Disability Campaign Questionnaire for people with disabilities and have very different solutions to pressing problems. Presidential candidate Hillary Clinton also has completed the questionnaire. However, both candidates running for governor, Chris Sununu and Colin Van Ostern, have yet to respond to the questionnaire.

Both major-party Senate candidates have responded to the survey, allowing the 166,258 citizens with a disability a chance to read their responses and compare them on a variety of issues. Gubernatorial candidates Chris Sununu and Colin Van Ostern have yet to respond.

Senate hopeful and current New Hampshire Gov. Maggie Hassan mentions her history in public service and her commitment to reducing stigmas against people with disabilities.

“I have worked throughout my career in public service to help reduce these stigmas, which are damaging to people who experience disabilities and the communities in which they reside,” she said. “That was one of the reasons I signed legislation making New Hampshire the first state in the country to prohibit employers from paying workers with disabilities less than the minimum wage – eliminating that double-standard for pay to help reduce the stigma associated with workers with disabilities.”

In her response, incumbent Sen. Kelly Ayotte talked about the different legislation she has been involved with to advance opportunities for people with disabilities.

New Hampshire can do much better on jobs for people with disabilities. With the upcoming presidential, gubernatorial and senate elections happening soon, many opportunities will arise for advances in the disability field. The Granite State has accomplished much in terms of competitive, integrated employment for people with disabilities. However, WIOA and the Combined State Plan offer the chance to build on those successes and sustain a brighter future.

Remember to Vote
New Hampshire residents can vote for the candidates of their choice either on the standard voting schedule or through early voting. New Hampshirites have until Oct. 29, 2016, to register to vote for the election. To register to vote, residents must apply in the town or city clerk’s office in the town or city where they reside. More information can be found at: Voter Registration. Voters also can cast an early vote until Nov. 7, 2016 if they qualify for an absentee ballot. In order to receive an absentee ballot, you have to meet certain qualifications such as being away from home on Election Day, being prohibited from going to a voting location on Election Day because of a religious commitment or having a disability. More information regarding absentee ballots can be found at: Election Forms.