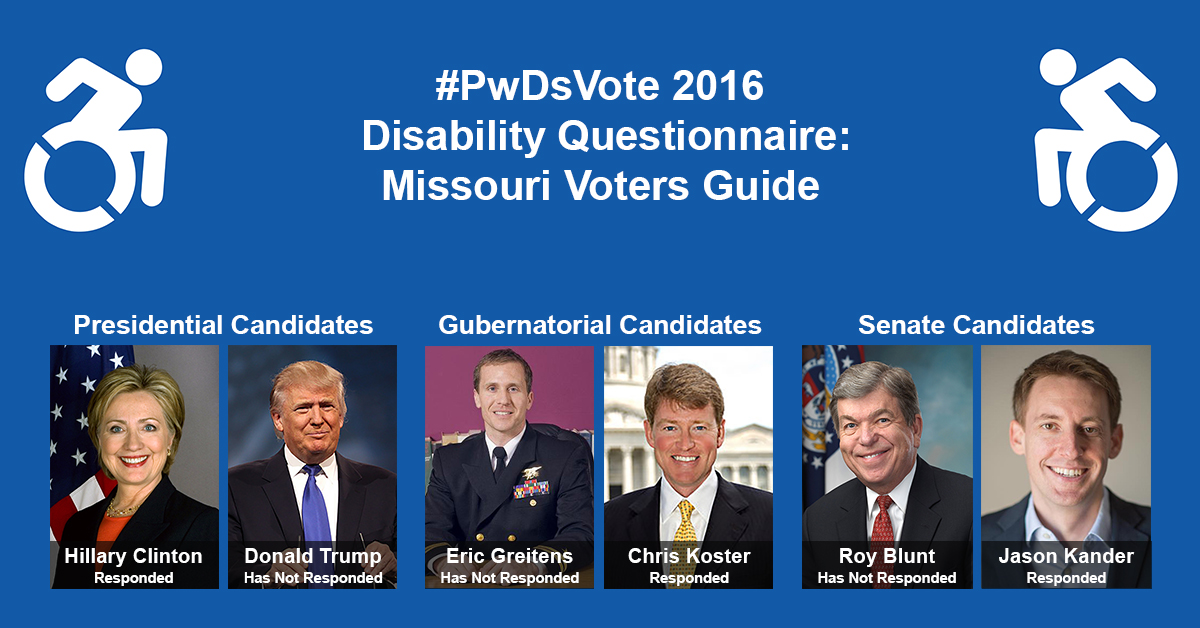 Washington, Oct. 12 – As Missourians prepare for the upcoming presidential, senate and gubernatorial elections, RespectAbility is releasing its Missouri Disability Voter Guide. Missouri has an open gubernatorial seat in addition to a Senate race this year. Republican Lt. Comm. Eric Greitens is facing Democrat Atty. Gen. Chis Koster for the governorship. Meanwhile, Democrat Jason Kander is challenging incumbent Sen. Roy Blunt for the Senate seat representing Missouri. Both Democrats, Chris Koster and Jason Kander, in addition to presidential candidate Hillary Clinton, have responded to the #PwDsVote Disability Campaign Questionnaire for people with disabilities. While Greitens and Blunt have not yet submitted any responses, they would be welcomed and included in future voter guides.

Missouri has an open gubernatorial and Senate election. A candidate from each of the races has responded to the questionnaire, allowing the 475,800 citizens with disabilities who are between the ages of 16 and 64 a chance to learn their stances on a variety of issues.

Missouri varies greatly when it comes to the employment of people with and without disabilities. The state’s employment rate for people without disabilities lies at 77.2 percent. Meanwhile, only 32.8 percent of working-age Missourians with disabilities statewide are employed. Greater precision is needed for the workforce system to evolve to tap into the labor resource that the disability community represents. This election cycle creates an opportunity to improve this aspect, as well as to increase opportunities for competitive, integrated employment for people with disabilities. Voters are looking to know where the candidates stand on important disability issues so that they can help look improve these efforts this coming election.

In his responses, Senate candidate Jason Kander mentioned how being inclusive of people with disabilities is one of the crucial aspects of being an American.

“Everyone should be treated equally and with the dignity and respect they deserve – this is the core value of what it means to be an American,” Kander said. “It is imperative that we end social stigmas about people with disabilities, which only can be achieved once we end the systemic and institutional barriers people with disabilities face. That means ending discrimination in the workforce and working with schools to address bullying so children do not grow up unaware of how their actions can hurt others.”

Gubernatorial candidate Chris Koster also responded to the questionnaire. While Koster did not answer each question individually, he sent a letter addressing several of the issues brought up in the questionnaire including ensuring websites are accessible for all, expanding access to healthcare and ensuring accessible housing for people with disabilities.

“Though we now have legal protections in place for citizens living with disabilities, there is always more that can be done to make our state inclusive accessible,” Koster stated. “These changes can be as small as improving the readability of a website, or as ambitious as revitalizing our healthcare system. As Governor, I will continue to work to make a difference, no matter how small. Any improvement we can make in the lives of Missourians is worthy of our efforts.”

RespectAbility President Jennifer Laszlo Mizrahi said, “Missourians with disabilities want jobs so they can achieve the American dream, just like anyone else. It is vital for them to know where the candidates stand on economic, stigma, education, safety, transportation, housing, healthcare, foreign affairs and other issues. The candidates have hugely different ideas about how to deal with the issues. Thus, it’s extremely important to read their full answers so you can understand their vast differences.”

Missouri Needs to Improve Outcomes for Citizens With Disabilities
There are 449,600 Missourians with disabilities who are between the ages of 18-64. More than 107,000 Missouri students have individual education plans (IEPs). Additionally, many Missourians with disabilities have not yet received a disability diagnosis they need, and thus are not yet receiving the school accommodations and supports that they need to succeed. Many students who might need support to succeed academically instead find themselves trapped into a lifetime of poverty or flowing down the school to prison pipeline.

However, employment rates alone do not tell the whole story of disability employment in Missouri. Indeed, when you consider the staggering 44.4-point gap in the Labor Force Participation Rate between people with and without disabilities, Missouri drops to 43nd in the nation. View the rankings of all 50 states and compare.

Further, there are more than 26,000 youth with disabilities between the ages of 16 and 20 in Missouri. Each year a quarter of them will age out of school into an uncertain future. Thanks to the upcoming elections and the implementation of the Workforce Innovation and Opportunity Act, Missouri has the chance to invest resources in successful models and implement best practices to expand job opportunities for people with disabilities.

WIOA Offers Missouri an Opportunity to Improve Outcomes for People with Disabilities
RespectAbility, founded in 2013, is a nonpartisan, nonprofit organization working to end stigmas and advance opportunities for people with disabilities. It has submitted comments for all 50 state’s drafts of the Unified Plan as required under Section 102 of the Workforce Innovation and Opportunity Act (WIOA). RespectAbility commented publicly on Missouri’s state plan as there is significant opportunity for improvement. WIOA offers Missouri an opportunity to effectively employ and integrate people with disabilities into Missouri’s workforce.

One of the most important facets of WIOA is that it raises expectations for youth with disabilities and assists states to provide them with the supports they need to ensure success. Indeed, as Missouri’s Baby Boomers retire and its state’s economy evolves, employers are starting to experience increasing talent shortage. Missourians with disabilities are an untapped resource that can be trained to bridge that gap. Indeed, a recent detailed study by the Kessler Foundation and the University of New Hampshire shows the 70 percent of working age people with disabilities are striving for work.

Evidence shows that people with disabilities can provide a wonderful solution to companies and other employers that want to succeed. The diverse skills, greater loyalty and higher retention rates of people with disabilities are already starting to meet employer talent needs in increasing numbers around America. With WIOA, Missouri can benefit from that progress if it truly breaks down silos within government agencies and partners, and lets innovation, based on evidence-based practices, take place.

Remember to Vote
Missouri residents can vote for the candidates of their choice either on Election Day or through early voting. Missourians had until Oct. 12, 2016 to register to vote for the general election. Registered Missourians who expect to be unable to go to their polling place on Election Day may vote absentee beginning six weeks prior to an election. Voters can request absentee ballots from their local election authority in person or by fax. More information regarding absentee voting is available at: How to Vote.