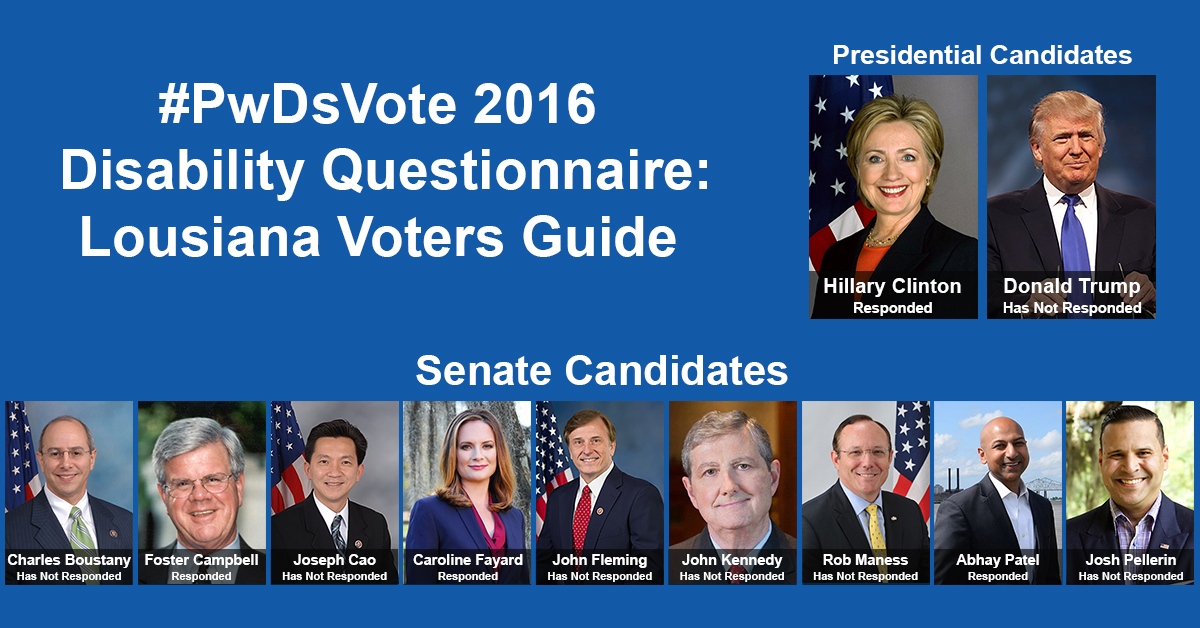 Washington, Oct. 12 – As Louisiana gets ready to hold the election for the open Senate seat, RespectAbility has released its Louisiana Disability Voter Guide. Louisiana’s race has a large number of contenders, several of whom have responded to the disability questionnaire. Democrats Foster Campbell and Caroline Fayard and Republican Abhay Patel, as well as presidential candidate Hillary Clinton, have responded to the #PwDsVote Disability Campaign Questionnaire for people with disabilities. RespectAbility also sent the questionnaire to the campaigns of Joseph Cao, John Fleming, John Kennedy and Josh Pellerin but they have yet to respond. The campaigns of Charles Boustany and Rob Maness declined to answer the questionnaire.

Louisiana has an open Senate race and three of the candidates have responded, allowing the 679,446 citizens with disabilities a chance to compare them on a variety of issues.

Democratic hopeful Carolina Fayard said the United States has a duty to strive for inclusion.

“As U.S. Senator, I will be a champion for all Americans living with disabilities and will work to ensure that they can find meaningful and gainful employment without stigma or discrimination” she stated in the questionnaire. “As a country and community, we continually strive to create inclusive environments for our disabled. Nearly 54 million Americans live with some type of disability and our commitment to them, and the disabled around the globe, must not wane. That’s why I also support the United States joining the United Nations Convention on the Rights of Persons with Disabilities.”

Fellow Democratic candidate Foster Campbell affirmed the notion that people with disabilities deserve the same opportunities and equal treatment like everyone else.

“Constitutional rights are afforded to all people regardless of whether they are people with a disability,” he responded. “People with disabilities infuse our society with the best America has to offer, as over fifty million Americans live with some form of disability. It’s our job as a nation, to make sure those fifty million people thrive as they contribute to our society at every level. Whatever it takes to eradicate discrimination, barriers to employment, and roadblocks to independence, as a person with disabilities, I will not stop until the job is done.”

Republican candidate Abhay Patel, who is an individual with a disability himself, hopes he can be an example of success if elected.

“My career in business and candidacy itself stand as one testament to what those with disabilities can accomplish,” Patel said. “I would hope that when elected, I will be able to offer another high profile example of how living with a disability is an opportunity to excel rather than a barrier or limitation.”

Louisiana Needs to Improve Outcomes for Citizens with Disabilities
There are 366,981 Louisianans with disabilities who are between the ages of 18-64. Additionally, there are 22,900 Louisianans ages 16-20 with disabilities. More than 70,000 Louisiana students have individual education plans (IEPs). However, many Louisianans with disabilities have not yet received a disability diagnosis they need, and thus are not yet receiving the school accommodations and supports that they need to succeed. Many students who might need support to succeed academically instead find themselves trapped into a lifetime of poverty or flowing down the school to prison pipeline.

Louisiana has the opportunity to work hard to improve outcomes in terms of competitive, integrated employment for people with disabilities with the upcoming election. Currently only 32.1 percent of working-age Louisianans with disabilities are employed compared to 75.5 percent of those without disabilities. View the rankings of all 50 states and compare.

However, employment rates alone do not tell the whole story of disability employment in Louisiana. There are over 22,900 youth with disabilities between age 16 and 20 in Louisiana. Each year a quarter of them will age out of school into an uncertain future. Thanks to the upcoming elections and the implementation of the Workforce Innovation and Opportunity Act (WIOA), Louisiana has the chance to invest resources in successful models and implement best practices to expand job opportunities for people with disabilities.

Louisiana Lacks Focus on Youth Transition
RespectAbility, founded in 2013, is a nonpartisan, nonprofit organization working to end stigmas and advance opportunities for people with disabilities. It has submitted comments for all 50 state’s drafts of the Unified Plan as required under Section 102 of WIOA. According to the current draft of Louisiana’s state plan, there are many elements that will help this effort. Louisiana’s emphasis on cooperation among agencies, and the desire to improve and self-evaluate, are all very encouraging and should be commended. However, the plan lacks a clear sense of how many youth have disabilities in Louisiana and thereby it will be more difficult to focus on empowering them. If Louisiana’s workforce system is to be fully successful at improving transitions to work for youth with disabilities, then it is imperative that the system has good data on youth who are aging into the workforce.

One of the most important facets of WIOA is that it raises expectations for youth with disabilities and assists states to provide them with the supports they need to ensure success. Louisianans with disabilities are an untapped resource that can be trained to bridge that gap. Indeed, a recent detailed study by the Kessler Foundation and the University of New Hampshire shows the 70 percent of working age people with disabilities are striving for work.

Evidence shows that people with disabilities can provide a wonderful solution to companies and other employers that want to succeed. The diverse skills, greater loyalty and higher retention rates of people with disabilities are already starting to meet employer talent needs in increasing numbers around America. With WIOA, Louisiana can benefit from that progress if it truly breaks down silos within government agencies and partners, and lets innovation, based on evidence-based practices, take place.

Remember to Vote
Louisiana residents can vote for the candidates of their choice either on the standard voting schedule or through early voting. Louisianans had until Oct. 11, 2016 to register to vote for the presidential general election. Voters can cast an early vote from Tuesday, Oct. 25, 2016 through Tuesday, Nov. 1, 2016. More information regarding early voting can be found at: Early Voting. If voters are unable to partake in early or standard voting, a registered Louisiana voter can submit a vote through absentee ballots as well if they qualify. Voters can apply for an absentee ballot online, through the mail, or in person at a local parish Registrar of Voters Office or at designated locations in the parish from fourteen to seven days prior to any election. More information and assistance regarding absentee ballots and rules can be found at: Vote by Mail.