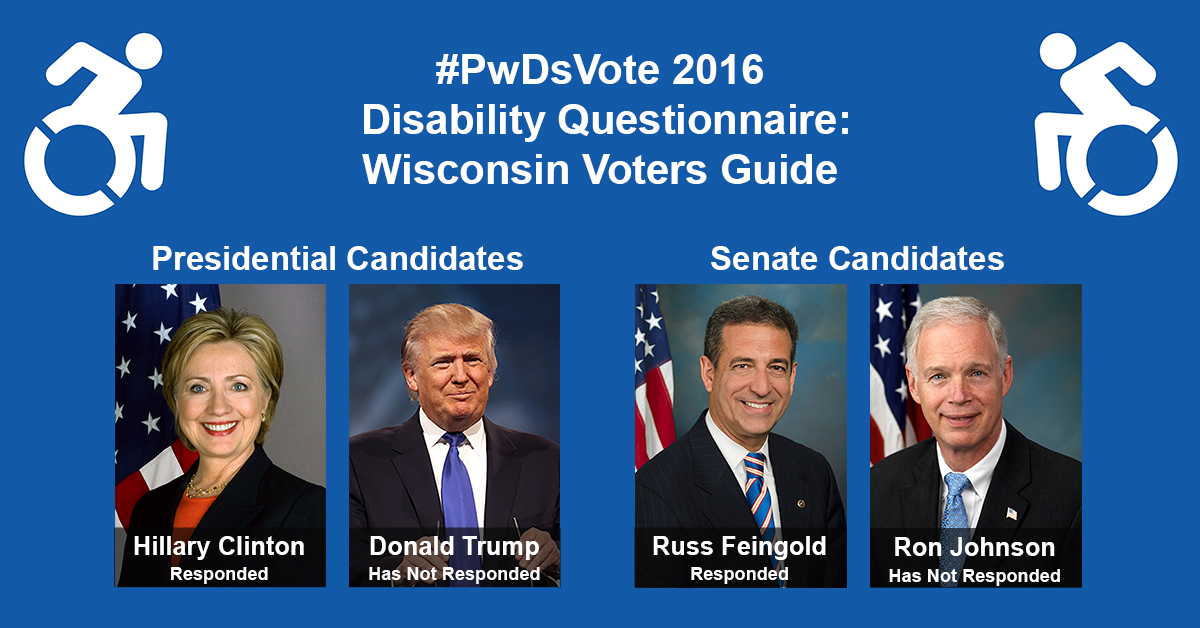 Washington, Oct 12 – As voters get ready to head to the polls in Wisconsin, RespectAbility has released its Wisconsin Disability Voter Guide for the upcoming senate and presidential races. Democrat Russ Feingold and Republican Ron Johnson are seeking the open senate seat. So far only Feingold, as well as presidential candidate Hillary Clinton, has responded and completed the #PwDsVote Disability Campaign Questionnaire for people with disabilities. RespectAbility will post Johnson’s responses once they are received.

Wisconsin has an open Senate race and only Feingold has responded, allowing the 685,794 citizens with disabilities a chance to read his responses and see where he stands on the issues. RespectAbility will post Johnson’s responses when they are available.

In his response, Feingold repeatedly contrasted himself with his opponent.

On education he said, “Every student with a disability deserves access to a free public education that gives them the resources they need to succeed in school and beyond. I voted for the Individuals with Disabilities Education Act and support extending the act to make funding for special education mandatory. I also support full implementation of the Every Student Succeeds Act, particularly the measures on testing accommodation and preventing bullying and harassment. We need to make sure that the reports mandated in the act, like state reports on bullying, result in real changes that improve the learning environment for people with disabilities. I also support the federal PROMISE grant program, which has helped young people with disabilities throughout Wisconsin connect with career opportunities. My opponent, on the other hand, has actually introduced legislation that would limit the enforcement of the Americans with Disabilities Act in charter schools that receive taxpayer money.”

RespectAbility President Jennifer Laszlo Mizrahi said, “Wisconsin voters are looking for jobs so they can achieve the American dream, just like anyone else. Gov. Walker has done a lot but the competitive senate seat as well as the presidential race are critically important as well. It is also vital for us to know where the candidates stand on the disability aspects of economic, stigma, education, safety, transportation, housing, healthcare, foreign affairs, criminal justice and other issues. The candidates have hugely different ideas about how to deal with the issues. Thus, it’s extremely important to read their full answers so you can understand their vast differences. We also hope that Sen. Johnson will give his views in the future.”

Wisconsin is ahead of many states in terms of expanding employment for people with disabilities. Under the new Workforce Innovation and Opportunity Act (WIOA) plan, with strong leadership and implementation, people with disabilities in Wisconsin will be ever-increasingly contributing members of their communities in new and better ways. This will strengthen the economy for all people in Wisconsin.

RespectAbility, founded in 2013, is a nonpartisan, nonprofit organization working to end stigmas and advance opportunities for people with disabilities. It has submitted comments for all 50 state’s drafts of the Unified Plan as required under Section 102 of WIOA. The Wisconsin WIOA draft is well done. It creates a win-win-win strategy and system for vital improvements for Wisconsin’s workforce system and its ability to serve people with barriers to work, employers and taxpayers alike.

One of the most important facets of WIOA is that it raises expectations for youth with disabilities and assists states to provide them with the supports they need to ensure success. Indeed, as Wisconsin’s Baby Boomers retire and the state’s economy evolves, employers are starting to experience increasing talent shortage. Wisconsinites with disabilities are an untapped resource that can be trained to bridge that gap. Indeed, a recent detailed study by the Kessler Foundation and the University of New Hampshire shows the 70 percent of working age people with disabilities are striving for work.

Evidence shows that people with disabilities can provide a wonderful solution to companies and other employers that want to succeed. The diverse skills, greater loyalty and higher retention rates of people with disabilities are already starting to meet employer talent needs in increasing numbers around America. With WIOA, Wisconsin can benefit from that progress if it truly breaks down silos within government agencies and partners, and lets innovation, based on evidence-based practices, take place.

Remember to Vote
Wisconsin residents can vote for the candidates of their choice either on the standard voting schedule or through early voting. Wisconsinites have until Oct. 19, 2016, to register to vote for the presidential general election. Register to vote online at: Register to Vote. Voters also can cast an early vote. Early voting dates vary by municipality. More information regarding early voting and municipalities can be found at: My Municipal Clerk. Any registered Wisconsin voter can submit their vote through absentee ballots as well. To request an absent ballot, complete and submit an application for an absentee ballot to the municipal clerk in the county where you are registered to vote. More information and assistance regarding absentee ballots can be found at: I Want to Vote Absentee.